Japanese Maple, Acer palmatum: how to improve a small tree

Time for another "How To" article!

Earlier this week I noticed that one of "my"  Acer palmatums was getting quite overgrown, and had lost its shape completely.

This is one which I rescued from a fate worse than death, ie being smothered in ivy, five years ago. 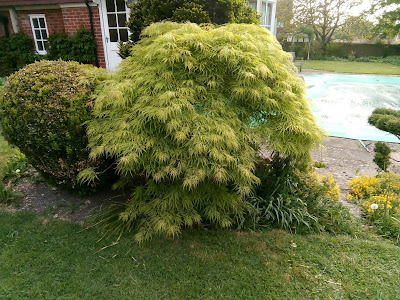 As you can see, it's still lovely, just look at those beautiful leaves, but it has turned into a bit of a "blob", instead of being shapely and stylish.

The lower fronds are sweeping the ground, which is never a good thing - they'll be chopped by the mower for a start, and they make it impossible to weed underneath it.

The first job is to crawl under it on hands and knees, grab hold of those lowest couple of branches, and follow them back to where they join the main trunk.

And then chop them off.

Then run round the other side, and see what it looks like. Oh, you can't actually see it from the other side, as the conifer blocks it completely.  Good! I need only worry about how it looks from this angle, but normally when doing something like that, you need to check round all sides after each cut, and before doing anything more.

So, that's the bulk of the big branches removed.  Stand well back, and assess it: 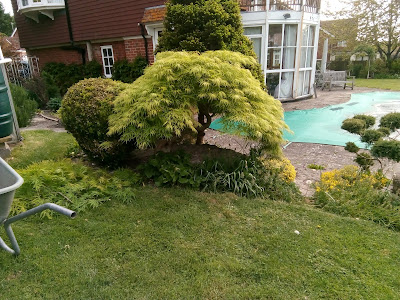 And we can also see that it's quite unbalanced, there is too much on the left.

So, back to hands and knees, locate where that lowest branch joins the main stem, and cut it off. 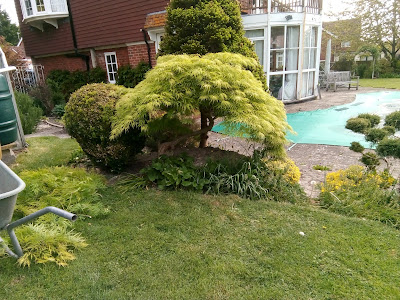 But now you can see that the right-hand side is too low, it's touching the low growing plants.

So, back to hands and knees, and this time I take hold of the lowest branch on the right, and follow it back, not to the main stem, but just back one "joint" in the branch system. 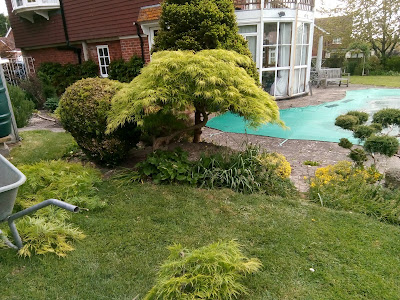 That's better, now the canopy is free of the ground, and it's more balanced.

There are just one or two wispy bits on the far right which are not quite right, though, so I go in with the secateurs and very carefully nip off a couple of the lowest fronds.


At this point, it's best not to get too carried away with the fine detail, but at the same time, having taken the step to do all the drastic pruning, don't waste the effort by leaving just a few untidy bits sticking out. 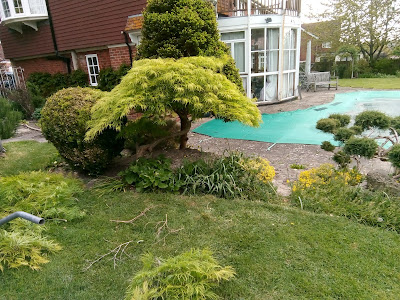 Here's the final thing, and I secretly think that the left-hand branch is maybe just a wee bit too long, but I'll stop there for now, and take another look at it after a couple of weeks.

This photo might not look very different from the one above, but those couple of small extra snips make all the difference!

(I can't find a way to make an animation of them, sorry.) (well, I can, but I quickly realised that for an animation to work, you have to be standing in EXACTLY the same place for each photo, otherwise the viewer gets an unpleasant, earthquake-like experience and has to go and lie down for a while.)

So there you have it, how to re-define a lovely Japanese Maple. Be brave, be bold, and know when to stop!!