Sedum: how to propagate after Chelsea Chop

A couple of days ago, I wrote about using the "chelsea chop" to prevent Sedums from flopping open, and "Stainless" reminded me that the offcuts can be used as propagation material. Free plants!

It's very simple, so well worth having a go. Here's a quick "how to do it" tutorial. 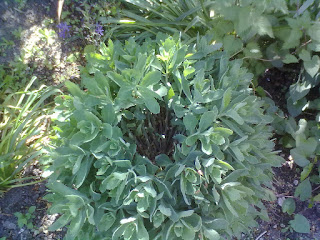 Having cut out those central stems,  right, you will end up with a hole in the middle of your clump, and a handful of shortish cut-off stems.

Take the off-cuts, gently cut off the lower leaves, and push the stems into a pot of soil or compost.

Put about five or six stems in each pot.

It is traditional to put them round the edges of the pot, but no-one seems to know why. I have done one or two experiments, not enough to be conclusive yet, but initial results suggest that it doesn't make much difference to the rooting of the cuttings, whether they are right up against the sides of the pot, or an inch in (ie not at the edge) but if you put them pretty close to the edge, it does slightly reduce each plant's roots infiltrating those of the next cutting.

Annoyingly, I have taken photos of this process twice, but still haven't managed to get a full set of photos of the whole thing... in focus! Oops, will try harder.

Anyway, having put them into a pot, leave it outside - it does not need to be put indoors, or in a greenhouse - and keep it watered.

In a few weeks, or maybe a couple of months, some, or many, or all, of the stems will have produced little tiny baby plants at the base, where they join the soil.  Allow them to grow a little bigger, then gently tip out the pot and separate them, potting each one on individually. At this point, you can cut off the original big stem, if you wish.

Let them grow on for a few weeks, until they are big enough to plant out.

Yes, it really is that simple - and now you have lots of strong young plants, ready to be planted out in your garden, or passed on to other people!

Posted by Rachel the Gardener at 17:26