Time to empty out the greenhouse

This is one of those lovely winter jobs, of which there are all too few when "one" is self-employed: a job that can genuinely be done when it is raining, or in heavy frost, when "one" can't walk on the grass for fear of ruining it.

And the job is - emptying  out the greenhouse from last season's crops.

Job one: cut down the plants, now that they are finished. 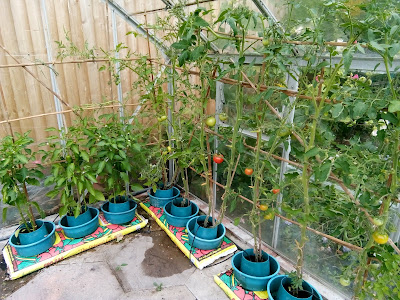 In this greenhouse, I grew two types of tomatoes, and one type of sweet pepper. spread over four grow-bags.

Here's a picture from back in August, showing everything growing well.

They continued to produce crop right into early December, but by two weeks ago they were starting to show signs of struggling: this greenhouse is unheated, and although they would continue to produce for a few weeks more, I usually empty it out before Christmas, because the Client expects to see a nice clean empty greenhouse.

If it were mine, I would prune out any sickly looking areas every day or two, and keep it going until well into the New Year, but part of being Someone Else's Gardener is knowing when to do what they want you to do....

So, first job is to cut down all the old growth. All of it goes on the rubbish heap: every gardening book I have ever read states that we must not put tomato or potato plants on the compost heap, for fear of perpetuating blight. Now that we have the internet, you'd think that we would at last be able to escape from the Old Wives' Tales which perpetuate urban and gardening myth, but no, if anything, the internet makes it worse, because about 90% of the internet is "stuff which has been cut and pasted from somewhere else" so you find the same old myths going round and round, but now they have an entirely fake aura of truth about them, "because I read it on the internet".

For many years I've wondered which part of the plant(s) contains the blight: is it just the fruit? Is it the foliage as well? So to be on the safe side, I have never composted any part of either of these plants. When writing this article, I suddenly wondered if things have improved, so I typed in a simple query, which throws up the following interesting and contradictory facts:

1) Which? magazine state that it's perfectly ok to compost blighted tomato material:

"blight only persists on living material so once the plant is dead it's fine to compost it." they say. They even say that it's ok to re-use grow-bags or compost in which you've grown blighted tomatoes! Rather them than me, I say.

2) Whereas the RHS state:

"Infected material should be deeply buried (more than 45cm deep), consigned to the green waste collection or, ideally, burned rather than composted".

So there you have it, the modern wonder of communication, the great and wonderful internet, will tell you two completely contradictory statements.

What do I, personally, do?  I don't compost any tomato or potato material at all: not the fruit, not the leaves, not the prunings, not the pinching outs, not the healthy stuff, not the tired old mildewy growth.  All of it goes on the bonfire heap.

So, where were we? Oh yes, cut down all the top growth and bin it. Undo the support cane construction, and put the canes aside to let them dry out thoroughly. This makes it much easier to deal with the roots. 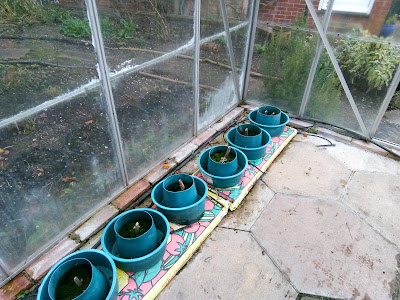 Here we are with the top growth gone, and all the canes untied and removed.

Now I can pull out all the plastic collars. 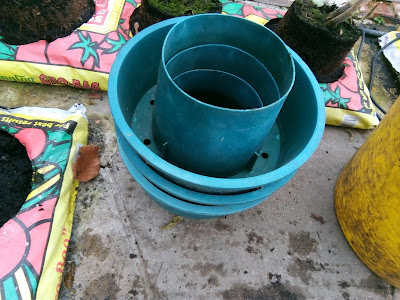 They get wiped down and set aside to dry thoroughly, then they can be stacked neatly and put away for the winter.

I love these collars, they make it extremely easy to water the grow bags, as you can slosh the water onto the collar in a great deluge, without having tidal waves of muddy water going all over your feet.

They also allow each plant to grow just a few inches higher than the main grow-bag height, which helps to keep the stems dry, and thus less prone to mildew, damp etc. 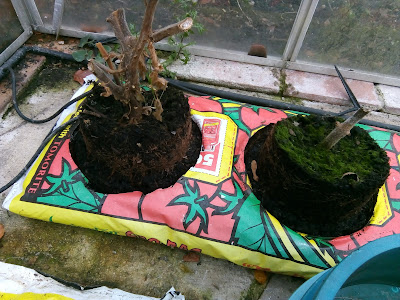 With the collars removed, you can see how the plants have made islands of compost for themselves, and you can easily see how this helps with the drainage: the main stem of the plant remains well drained, while the lower roots are filling the grow-bag.

It's now very easy to pull off each of these little volcanoes of compost and roots, and they also go on the rubbish heap. 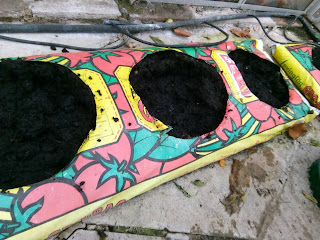 Here are the grow-bags without the roots - I have brutally twisted off the tops, leaving the tired old grow-bag soil still inside the bag, rather than scattered all over the floor of the greenhouse.

These emptied bags can now be carefully  lifted outside, and the spent compost can be scattered on the beds, where it acts as a mulch over the winter, and a soil conditioner for next spring.

There won't be a great deal of "goodness" left in this soil, but it's perfectly ok to fling it around the shrubbery. 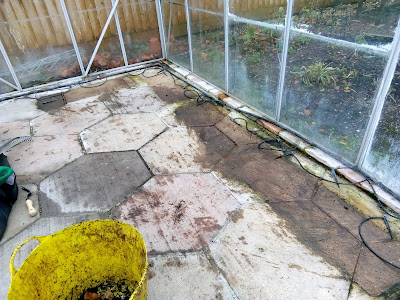 The final job is to sweep up any bits, pull out any cheeky weeds which have sprouted under the grow-bags, and to lay aside the irrigation pipe, ready for next year.

I would usually take the time to wash down the windows, as well: sometime that job gets left until spring, sometimes I do it in winter, it depends how much time there is.

But it's certainly worth sweeping out the greenhouse, to allow it to dry out thoroughly over the winter.

I leave the side vents open, but close the roof vents, so there is no risk of the high level windows being damaged by winter storms: I also close the door, safe in the knowledge that the winter sun is amply hot enough to dry out the interior, and the side vents will allow all the dampness to escape.

So there  you have it! A quick and easy winter job, and so very satisfying to do!

Posted by Rachel the Gardener at 17:09