How much rubbish does a garden generate

I get asked this question quite a lot: and what's more to the point, when I go to a "new" garden, I always have to warn the Owner that the work they want done will generate a lot of waste material. I mean, a LOT of it! This particularly applies to an ad-hoc ("hit and run") job, but does also apply to my regulars.

I try to compost as much material as I can. but invariably people hire a gardener to do the 'orrible bits of the garden: I rarely get to a bit of light dead-heading, or some casual gentle weeding, in the soft afternoon sunshine.  No, I'm usually sweating buckets, digging out bindweed, heaving out previously unspotted Sycamore or Ash seedlings, and fighting my way into overgrown shrubs in order to prune them.

All this sort of work generates masses of bulky waste which can't be composted.

To give you an idea, here's how much "rubbish" I generate in one morning of work: 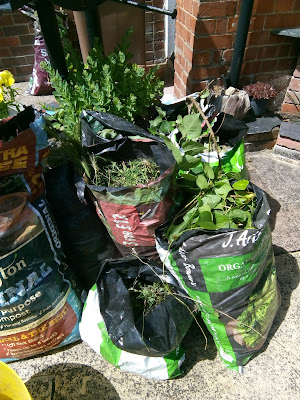 And that I've put a fair amount into the compost bin - this lot is all the non-compostable material.

How large, I hear you ask, is this garden? Two acres? Four acres? Or, how long since you were there last - a couple of months?

Nope: I go there every week, one morning a week, and it's a rather small domestic garden, actually.

But about once a month or so, I generate this much waste: I try to bag and stack it neatly, and I try to put it somewhere where it won't get soaking wet, but I always feel guilty!

However, it has to be done: in some of my gardens, the owners just stockpile my overflow bags and save them for quieter times of the year, while in others, they prefer to load up their car and take them down the tip.

And this, dear reader, is why I prefer working in gardens big enough to have a bonfire heap!

Posted by Rachel the Gardener at 15:01