Interesting things which I have found while gardening: a door.

Once upon a time, there was a house, one wall of which was smothered in summer jasmine.

I say "smothered" because the owners could only just see out of the windows, it was so thickly growing, and  it was forcing its way into the render, which they knew because large chunks of it were clearly visible on the ground underneath the wall.

So I was asked to remove all the climbing jasmine, so they could get the wall re-rendered. And so they could enjoy some light in that room. Then they'd put up some proper supports, and we'd let it regrow in a more orderly fashion.

Now, this is a classic situation where I really wished that I'd taken a "before" shot, but alas, I didn't: the best I can do is this, from earlier in the year: 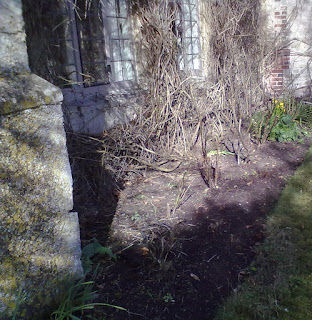 Here is the bed taken from the left hand end, you can see that there are two windows, and a mass of winter-bare jasmine stems in a mad tangle along the ground, and all up the house wall.

There are some roses at the front of the bed, and a few struggling bulbs further along.

So I started at ground level, cutting down the jasmine to just a couple of inches, and gently easing the upper parts off the wall, and out from behind the downpipes.

It was a filthy job, I have to say.  By the time I'd finished, I was covered in dust, debris, insects, and little bits of jasmine: in my hair, in my eyes, in my ears, all down my cleavage (when, oh when, will someone invent the bra-strainer?), everywhere.

Plus, I had to be careful not to damage any more of the render than was already loose and falling off: plus, it had weevilled its way round the back of the downpipe fixings, to the point where the stems were actually forcing the brackets off the wall, so I had to just cut them off short above and below each point, and hope that one day, they'll dry up and shrink enough to be pulled free.

Finally, though, it was all done.

And that's when I found the door. 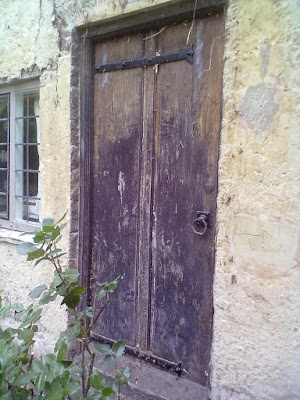 Here it is! Isn't it lovely?

It was completely covered up - go on, go back to the first photo and look for it. There it is, if you know where to look, on the far right of the photo.

I had vaguely seen the black wood, and had assumed it was just a decorative panel, or possibly a third window which had been boarded up: but no, it's a proper door.

It doesn't actually open: on the inside,  it's been nailed shut and I think it was covered up with plasterboard when the owners first moved in.

On the garden side, the threshold is a good 18"  off the ground, and it opens right into the rose bed, as you can see, so it's unlikely to be used as a door in the near future.

But it's nice to know that it's there, and now the owner can clearly see how much rendering needs to be replaced - quite a lot,  unfortunately!