Recently, a friend of mine ("Hi, Katie!" *waves*) sent me a link to this quite incredible story on a blog in America: the headline reads "Permaculture Garden Produces 7000 Pounds of Organic Food Per Year on a Tenth of an Acre"

Is that weight or money? Oh, it's America, must be weight. That's just over 3 metric tonnes, or 3½ American tons, of food. 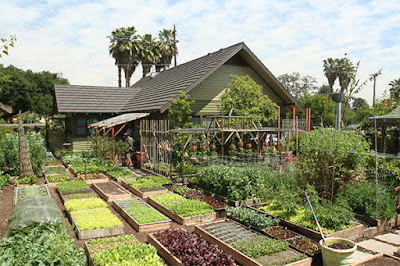 Well, that is pretty awesome, I have to say.

The story (which you should read for yourselves - go on, follow that link and check it out, it's quite short) tells of a chap living in downtown Los Angeles, who got fed up with the money, time and water he spent on his lawn, and decided to rip it out and grow veg instead.

They now proudly claim that it's producing 90% of their vegetarian diet, plus they sell $20,000 of plants each year, so it gives them an income as well. And they don't use any artificial fertilisers at all.

And it is lovely: it's a great story, and it is something that should inspire us all to have a go. The daughters of the guy who started it say "he took over every square inch, horizontal, vertical, the frontyard, the backyard and the driveway".

But there are a couple of caveats that I would like to mention.

Firstly, Los Angeles.  The climate there is somewhat different from ours in the UK. Note the lack of any sort of greenhouses - they just don't need them. Their idea of winter is 20 degrees C (dropping down as much as 10 degrees overnight, ooh!), so as far as we are concerned, it's summer all year round.

Secondly, looking after this garden is going to be a full time job. Don't imagine that you could just potter around for half an hour each evening. This is intensive farming.

"Everything is done by hand," they say - there isn't room to hoe, because the plants are so densely packed, which in principle, means that there is no room for weeds, but we all know how well that works out, don't we..... and we have to assume that they are picking the bugs off by hand, constantly, as well. No chemicals, remember?

They make a big deal out of how they don't deplete the earth in the way that modern farming does: they aim (as any sensible gardener does) to increase the fertility of the soil by constantly adding organic matter, and by the use of deep no-dig beds, and one of their philosophies is to ensure the soil is covered with foliage at all times:  no bare soil there! They get, on average, no rain at all there between May and September, by the way, hence their emphasis on avoiding water loss through evaporation. But no matter what they call it (and they, apparently, hate the word Permaculture, denying that it's built on Permaculture principles at all), it is intensive farming.

Thirdly, this is a dry, dry climate: in the UK, if you crammed plants together like that, you'd have mould, mildew, slugs, and snails to contend with.

Fifthly (still not sure if that is a real word), presumably they have to watch the place like hawks night and day to prevent incursions from animals, thieves and vandals. The concept of turning your front garden and drive over to growing plants is an excellent one, but you do have to consider the neighbourhood, the wildlife, and the risk of damage, theft, and/or contamination.

I hardly need mention the danger of such intensive cultivation with regard to pests and diseases: one vine weevil in there, one butterfly laying eggs, one tiny speck of disease, and the entire garden could be infected within days. With no gaps between anything, it would be impossible to stop it spreading all over a bed, and then from bed to bed.

They also produce 2,000 eggs a year - that's probably ten birds: I can't see from the photos where the hens are kept, but I imagine they have to be firmly penned in to keep them out of the food beds.

So that's me, pointing out some of the negative aspects of this article, as far as we in the UK are concerned.

But what good points could we take from it?

Well, for a start: who needs a great big lawn in front of their house? I'm not a big fan of lawns, I don't have any in my own (very small) garden, and I am all in favour of turning them over to something more useful: as long as it is fenced and protected, and as long as you don't fall out with your neighbours, who might think that your veggies will lower the resale price of their house. As anyone who has grown veg will know, for most of the year, it ain't pretty! 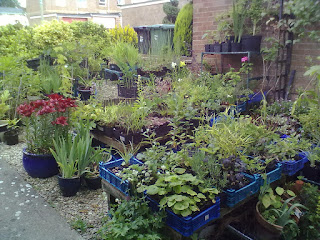 This - right - is two-thirds of my own front garden, turned over entirely to shingle, with plants for sale: everything you can see is in a pot, and everything is available for sale. Or was, last year! There's a different selection now.... but this shows what you can do with even a very small garden.

Then there's the Forest Gardening aspect: don't be restricted by not having much ground in which to grow: think layers, think vertical, use all those garage walls... and garages usually have gutters, so there's an instant source of water for irrigation.

They mention Square Foot gardening, and if you have never heard of this, google it now: it's an interesting idea, well suited to our small UK gardens, and is something that can be gradually increased.

So what am I actually saying? I'm saying, don't look at this guy's garden and imagine that you could get the same results in five minutes: instead, read about what he did and how he did it: do some research of your own: look at your own garden with a view to seeing what areas you would be prepared to turn over to veg: and think about how much time you have available to tend such an area.

Then get out there, and do it!