What to do with an over-pruned weeping Silver Birch

Here's a picture that could just as well be titled - well, I can't quite think of the right title for it. 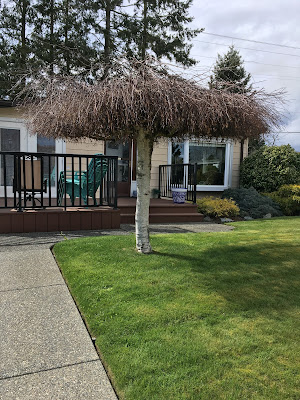 The new owners of this tree contacted me today, asking for advice on how to prune it: they correctly spotted that the top *pauses to wipe away more tears and blow nose* is full of dead material which needs to be cleared out, and they commented that is it far from  graceful.

They also point out that because it is right on the corner of two paths, it can't be allowed to weep properly (unlike me, still wiping away tears) as the growth is all at head height.

It has clearly been massacred pruned like this to allow people to walk underneath it, and judging by the thickness of the thatch, and the stoutness of the trunk, it's been done, year on year, for quite some time.

Right, first things first, what is it:  it's a Silver Birch. I can't tell which one: it could be Betula utilis 'Pendula' (although the bark doesn't quite look white enough), it is more likely to be Betula pendula, possibly 'Youngii' or 'Tristis' but both of those would normally be a little higher in the trunk: so I suspect that this is a top-worked tree.

Secondly, it is very clearly in the wrong place. No doubt when it was planted, it was a dear little thing, with a skinny trunk and not very many branches, and it was probably thought to be well clear of the paths. However, they didn't take note of what is called "eventual spread", so they didn't take into account how much bigger it was going to get. In fact, I imagine that they were told by the supplier that, being a grafted tree, it would not get any bigger. They should have been told "it won't get any higher, but it will get wider."

Thirdly, it would be possible to get up a ladder and painstakingly remove all the dead branches, which would at least have the benefit of reducing the "Tonga Beach Hut" effect, but it would never regain it's true weeping form, bearing in mind that as soon as it started to re-grow, the new branches would be interfering with passers by again, and would have to be cut back again.

The only solution here, I'm afraid to say, is to chop the bloody thing down. I'm wiping away a non-hysterically-laughing tear at this point, as I hate to see a tree cut down at any time, and I'm particularly fond of Silver Birch, but in all honesty I can't see any way of "managing" this tree that would be comfortable for walkers, nice to look at, and in any way pleasing to the tree.

Get the tree guys to cut it to ground level and grind out the stump. Fill it with soil, add some grass seed, and by mid summer it should be nothing but a memory.

It would be worth the new owners taking a look at the situation once the tree is gone: why was it planted there in the first place? Was it to stop people cutting over the corner of the grass? In which case, they could plant a small bushy shrub there instead.

Was it to give shade, or to block off an unwanted view looking outwards from the house? If so, plant another tree but position it a lot further inside the grass area - you can see that the trunk is in the centre of a circle of foliage, so measure the circle and then work out how much further away from both paths the trunk needs to be, in order for the foliage to not come into conflict with the paths.

As "chop the bloody thing down" is a bit of drastic solution, I would like you to know that I have given this matter some considerable thought, and I really think it's the best thing to do. However, I did come up with three alternatives:

1) cut the trunk at waist height, and use it as a small table.
2) cut it at knee height and use it as a seat.
3) cut it straight across the trunk, just below where all those branches sprout out. This would remove the top-worked, "weeping" material and would leave a stout trunk, which is the original Betula tree - probably, from the bark, Betula pendula.

(It's important to point out that Betula pendula, despite the name, is is NOT necessarily a weeping tree: the branches are slender and often drooping, but not weeping like a weeping willow. To get that effect, you have to buy a particular cultivar, or a top-worked one.)

By chopping off all the grafted material, you would be left with, in effect, a pollarded "normal" Silver Birch tree, which would - possibly - re-grow into a multi-stemmed upright tree. This would not interfere with walkers on the path, but it would then become a substantial tree: you can see by the thickness of the trunk that it's a well-rooted, mature tree, and if the rootstock were allowed to re-grow, it might well turn out to be 30-50' tall in time. And it is quite close to the house.

So on balance: sorry, everyone, but my recommendation is to remove the poor thing.
Posted by Rachel the Gardener at 09:36