Festuca glauca - small blue clumping grasses: to trim, or not to trim?

This is a question which vexes me on a regular basis: several of "my" gardens have these small rounded decorative grasses, and every year in autumn, I have to decide how to manage them over the winter.

My standard method is to rake out all the dead grass, using my faithful daisy grubber and/or my gloved hands.

Gloved? Always gloved, when dealing with grasses, as  you never know when they are going to give you a sly paper cut.

It's like combing out the tangles in your hair: you keep on combing until the daisy grubber runs through with no resistance, no matter what angle you use. Then you know you have truly removed all the dead stuff.

But then, there is the question of what to do with what is left. Often the clumps look a bit lanky and scruffy, and the garden owners often ask me to trim them, or "clip" them, so that they look neat over the winter.

I'm never happy doing this, because I think that the beauty of these small grasses  lies in their loose outline: if  you clip them, they turn into topiary and then you have to keep on clipping them, otherwise they look strange when they start to regrow.

It's important to  understand, at this point, the manner in which grasses grow.

Most garden plants grow from the tip onwards: if you cut them - as we do with Box and Yew, to make topiary and hedging, for example - then the cut end will immediately sprout new growth, often they branch out and become thicker. This is how hedges become dense.  This is also the basis of the Chelsea Chop: we cut off the single stem, which then re-grows, usually with multiple new stems.

Grasses, however, grow from the base: new leaves sprout from the centre of the clump.  They grow in rather the same way that our hair does, ie from the root: when we cut it, it continues to grow but the cut end remains cut: the hair is pushed out from the scalp, and the new growth is right there down by the roots,  not up by the tip.

So when we cut the blades of a decorative grass, we lose the tapered point and end up with a blunt tip. This blunt tip does not stop the grass from growing, but it will never regrow into a delicate point, it will always be blunt. This, in my opinion, rather spoils the look of the grass.

In addition, and again, rather like our own hair, each blade of grass will grow for a certain time, then it will stop growing, and in time it will be replaced by a new one growing from the base. So, those cut ends might "move outwards" for a while, or they might sit there, stationary, until they die.

New blades appear in a continual process: faster in spring and early summer, slower in autumn, and not moving very much at all through the winter.

This means that as soon as you clip or trim a clump, no matter where you cut them, new tips will appear in a week or two, because there are always some new shoots on their way up through the clump.

But does this matter? How long does it take to re-grow?

Aha! Time for some citizen science, let's do an experiment.

This garden has, conveniently, two identical Festuca glauca plants, side by side. So they get the same light and water conditions, they are in the same soil, they were planted at the same time (which I happen to know, because I supplied them) and they were the same size when planted. 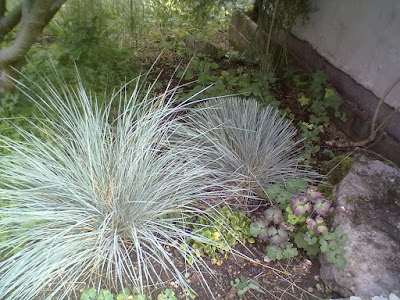 Here we are in July. They were looking rather brown and battered (sorry, I forgot to take a "before" picture), so I raked them both thoroughly, removing all the dead stuff, which freshens them up, removes several handfuls of what I call "bug hotel", and reveals their nice blue-ness again.

Then I trimmed one of them "to make it neat".

As you can see. 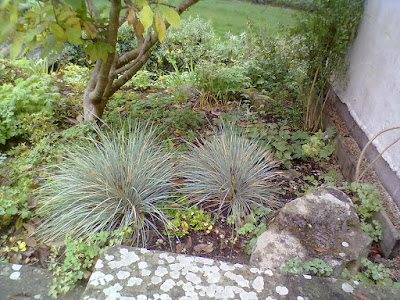 Exactly four weeks later, late August, you can see that the trimmed one has sent out a few wispy bits, which are the new blades of grass "growing out" through the haircut.

It doesn't look too bad.

The  uncut one has filled out, and is again a pleasing dome of foliage. 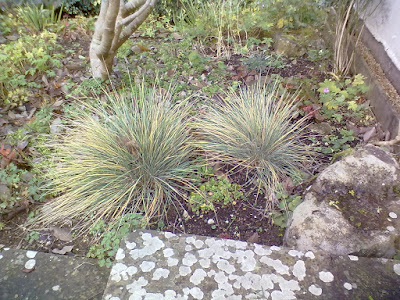 Here we are again, another two months on: you can see that the chopped one has now more or less regained the proper shape.

But it is still lagging behind in terms of size - it's distinctly smaller.

Both of them are starting to go a bit brown, as we are now well in to autumn. 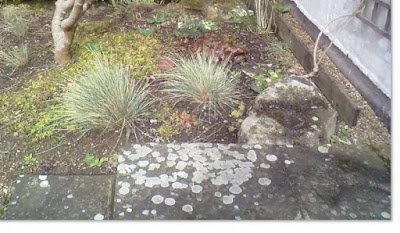 Here we are again the following spring, not the best of pictures: the one which was cut is still slightly smaller-looking that the uncut one, but it has at least recovered the fluffy shape.

So do we have a conclusion?

Trimming decorative grasses ruins the shape, in the short term, unless you particularly want the sheep-sheared look.

There is no horticultural justification for clipping them, other than "to make them look neat".

It's far better to just rake out the dead matter once or twice a year.

But, at the end of the day, if the owner wants them clipped, then I will clip them!
Posted by Rachel the Gardener at 10:15