Things you find on Compost Heaps:

I found something mildly amazing (if  you see what I mean!) on the compost heap the other day: 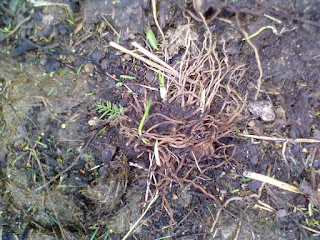 It's an Iris rhizome, one which was so small and ratty that  it was discarded when I split and moved a bunch of Iris towards the end of last year.

At about that time, I decided that this compost pen was full, and went over to filling the next one in line, so this rhizome was pretty much on the top of the heap: not nicely planted in amongst it all, you understand, but lying, dry and shrivelled, on the top.

But look! It's sprouting!! Even though it's actually  upside down,  hence all the pale brown roots waving in the air (now very dry and dead), there is sufficient stored energy in the rhizome to prompt it to start growing.

OK, a little bit sad at the same time, as this plant has no chance of succeeding -  it  might be able to produce some foliage this year, but it will be spindly, there won't be any flowers, and without any roots in the ground,  it won't be able to store up any nutrients for next year.

But I'm still impressed that it would even try! 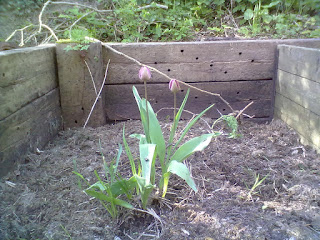 Here's another one - from a couple of years back, this compost pen clearly had some tulip bulbs thrown out onto it, the previous year: and look! Flowers!

I've also found sprouting Advocado stones (technically they are a berry, but they don't look much like one, do they!) in this same pen,  over the years, and I've often been tempted to pot them up and take them home... but without a greenhouse, they wouldn't flourish, so it's probably better not to.

What about you? Have you found anything interesting growing on a compost heap? Send me a  photo, there will be a prize for the best one!