How to remove Arum Lilies.

Firstly, what exactly are Arum lilies? Proper name, Arum maculatum, improper names include Cuckoo Pint, Lords and Ladies, Jack-in-the-pulpit and, when I was at school, Waggling Willies. It was not a particularly “good” school... but at least we had Nature Rambles!

And secondly, why would you want to remove them? Answer, mostly because they are devilishly generous with their self-seeding, and if you take your eye off them for two minutes, you find that you are over-run with the darned things! The other reason is that the seeds are very unpleasant: they are poisonous, but luckily - well, sort-of luckily - they are filled with saponins, which have needle-sharp crystals, so that if anyone starts to eat them, their lips, tongue and throat immediately hurt and swell up. This is very nasty, but at least it means that "one" is unlikely to choke down enough of the things to actually kill yourself.

Oh, they have their place: if you have large woodland areas to cover, they do a great job, and there is a certain ebullience to their startling orange seeds, later in the year. There is even a garden variety, Arum italicum, with elegantly marbled leaves which can be considered quite desirable.

But for most people, it's the common one that is causing the problems. They are popping up their green leaves at this time of year, shortly to be followed by an elegant wrap-around greenish-white confection, known botanically as a spathe, which is pronounced “spade” with a lisp. No, a lisp at the end, not at the beginning.

The actual flowers are hidden deep inside this spathe, and later in the year, the spathe and leaves will disappear, leaving a stout stalk topped with a cluster of green pea-sized seeds, quickly turning to bright orange. They are incredibly fertile, as anyone who has this plant in the “wrong” part of their garden will know - you start with just one or two, and the next year you are over-run with the darn things.

And there lies the problem - they proliferate too successfully, and they are very hard to remove, due to their structure. Each plant has a long, fleshy stalk which is attached - but not very firmly - to a knobbly, light brown tuber with fat white hair-like roots. This tuber can be as much as a foot underground, in mature clumps, so unless you can dig a hole that deep, it can be impossible to get the tuber out - and of course, if you don't remove the tuber, the plant will grow back next year.

How do I deal with them? Well, if they are not surrounded by other plants, I get out my fork and I dig, dig, dig: the trick is to get your fork in deeply, before you start to lever the plants out, otherwise that fleshy stalk just snaps off the tuber, in rather the same manner as a lizard dropping its tail: ie, no harm is done to the tuber, and it WILL regrow!

If the Arums are in amongst other plants, and large-scale digging is not possible, then it's down on hands and knees I go, with my faithful daisy grubber: 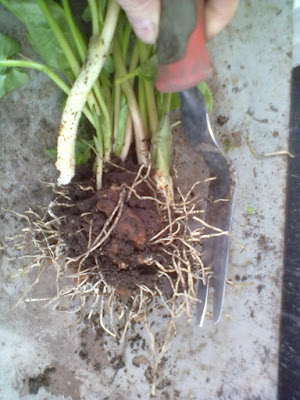 ...the technique here is to insert the daisy grubber vertically, just to one side of the target. Push it in as far as it will go, then lever out. With luck, the tuber will be attached, if not, I might have to rootle around for it in the loosened soil.

Here's a clump I dug up specially for you - and there's the daisy grubber to illustrate how deep the tubers are (as you can see, the daisy grubber was only just long enough to do this clump) and to show where to insert the tool, in relation to the clump: vertically, close to one side. 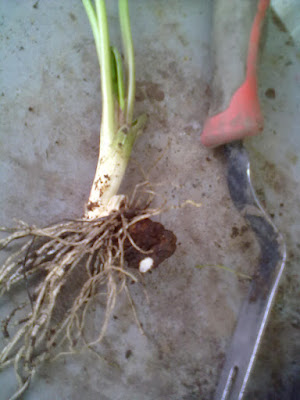 Here's a close-up of one of the plants, showing how the stalk - white, where it's been underground - attaches to the tuber at right angle.

This is the part that snaps off cleanly, lizard-style.

It also shows the lovely tangle of stout white roots which help to keep the tuber anchored firmly in the ground. 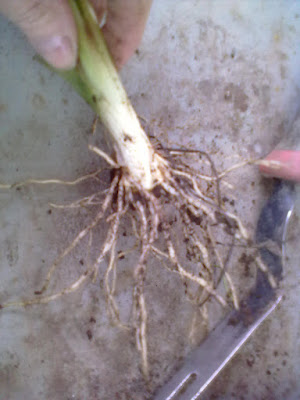 From the other angle, you can see that the white stalk ends very abruptly, and that's why it can so easily snap off when you try to weed them out.

In the very worst cases, where you simply cannot get at the tubers, then don't waste time: use a hand tool to loosen the soil a little, if you can, then just pull up the top growth and don't worry about the tubers. It will take them a year to re-grow, and if you do it again next year, and the following year, then eventually those tubers will run out of energy, as you are depriving them of all their chlorophyll-containing leaves before they get a chance to restock. Eventually, even Arum will get exhausted!

The most important point, though, about getting rid of Arum, is to never, EVER let them set seed. As soon as you see the first hint of orange, pull up the stems immediately, and put them either on the bonfire heap or in the council green-waste bin: don't ever put them on the compost!

So there's the answer to the Arum lily problem: constant vigilance, never let them set seed, and if you can't dig them out, at least pull their tops off, and don't be surprised if it takes you a couple of years to beat them - but beat them you can!

Posted by Rachel the Gardener at 15:35