Pollarding and coppicing are two versions of the same pruning technique, used to keep vigorous trees such as Hazel and Willow down to a reasonable size.

In "olden times" - ie the last two thousand years apart from the most recent 50 or so - this technique was used primarily to provide a product, ie long straight wands, which were then cut and used for weaving baskets, construction of hurdles for fencing, bundling into faggots for firewood and so on.

Coppicing involves chopping a tree at ankle height, then cutting the regrowth on a cycle of 5-7 years, depending on the species of tree, and the size of wands required. Pollarding is exactly the same, but higher up the trunk, and was used where grazing animals would eat off the fresh new shoots before they had a chance to grow. The height of the pollard would depend on what animals were in the area - horses have longer necks than cattle, so the main cut would need to be higher.

These days, pollarding is mostly seen on street trees, which have an annual chop to keep them under control, preventing them shading out street lights, overshadowing neighbouring properties etc.

In a garden setting, it's a good way to keep an otherwise boisterous tree under control, and here is a small Salix (Willow) that gets this treatment every year. 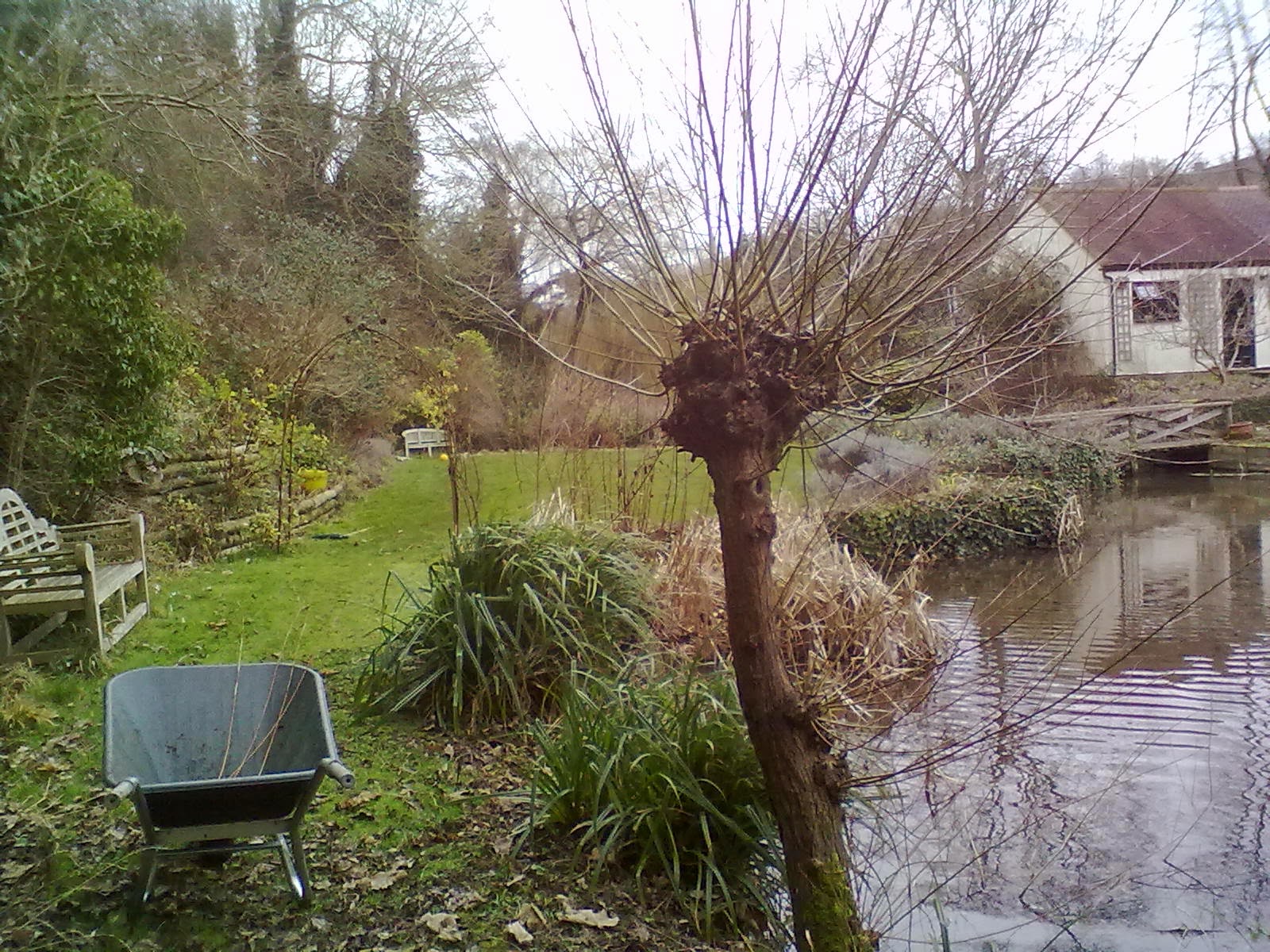 As you can see, not a huge tree, but only because I have been cutting it every year for the past 12 years or so.

This causes the top of the tree to grow into a "knob" instead of continuing to grow upwards, and this knob puts out new sprouts each year, which are easily pruned off.

All you do is take secateurs, or loppers, and cut off each individual branch as close as you can to the base.

Then catch them before they fall in the lake and get washed downstream to cause havoc at the weir... 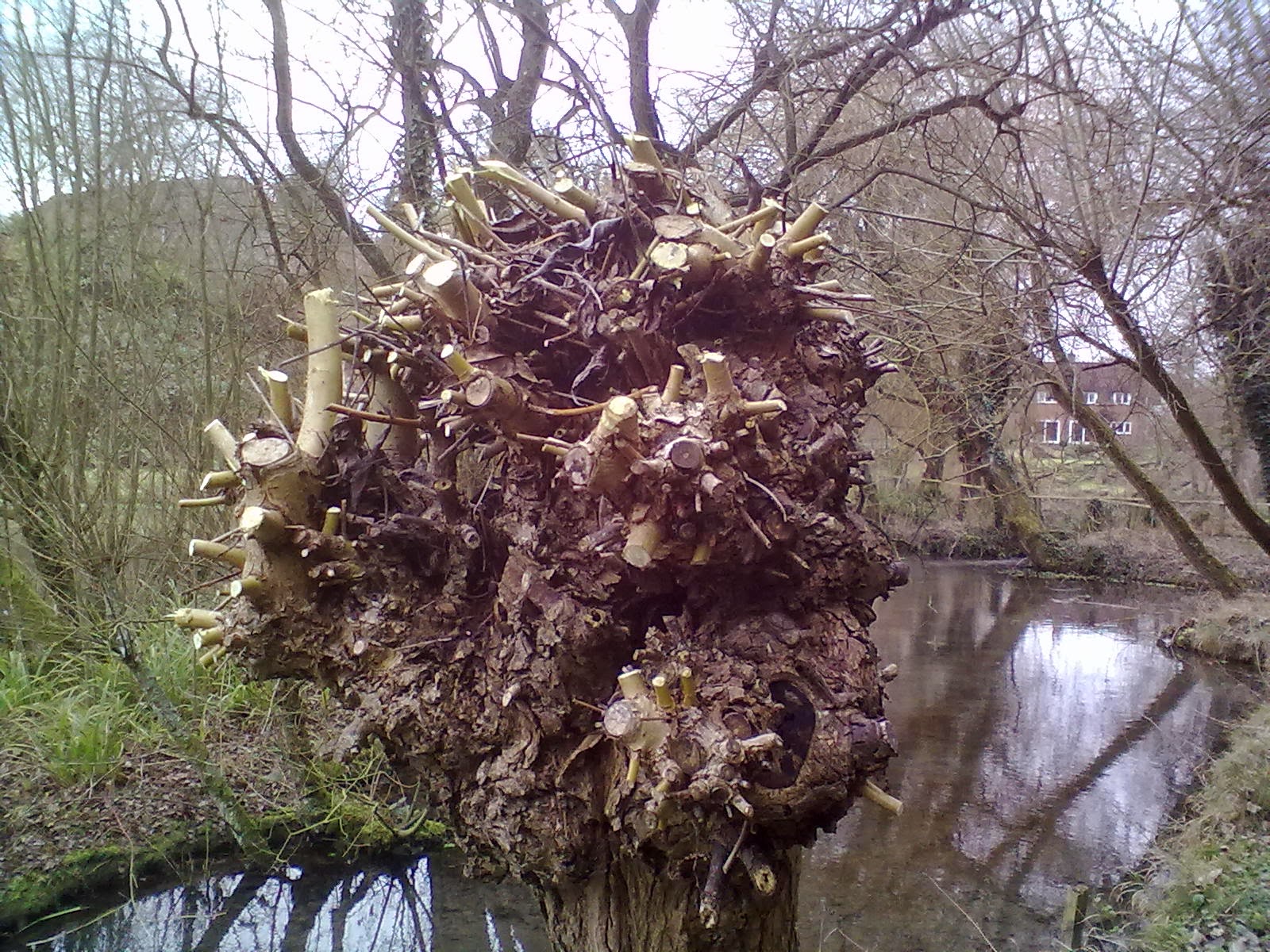 Here's a close-up to show you that it's not rocket science: some of them are chopped off more closely than others, because the ones on the left as you look at this picture, are the ones overhanging the lake, so I have to stand in a fairly precarious position to get at them.

And the ones you have already cut tend to get in the way of the blades, making it hard to get them all cut really closely: but as with many gardening tasks, you do the best you can, and the plant generally rewards you by thriving. 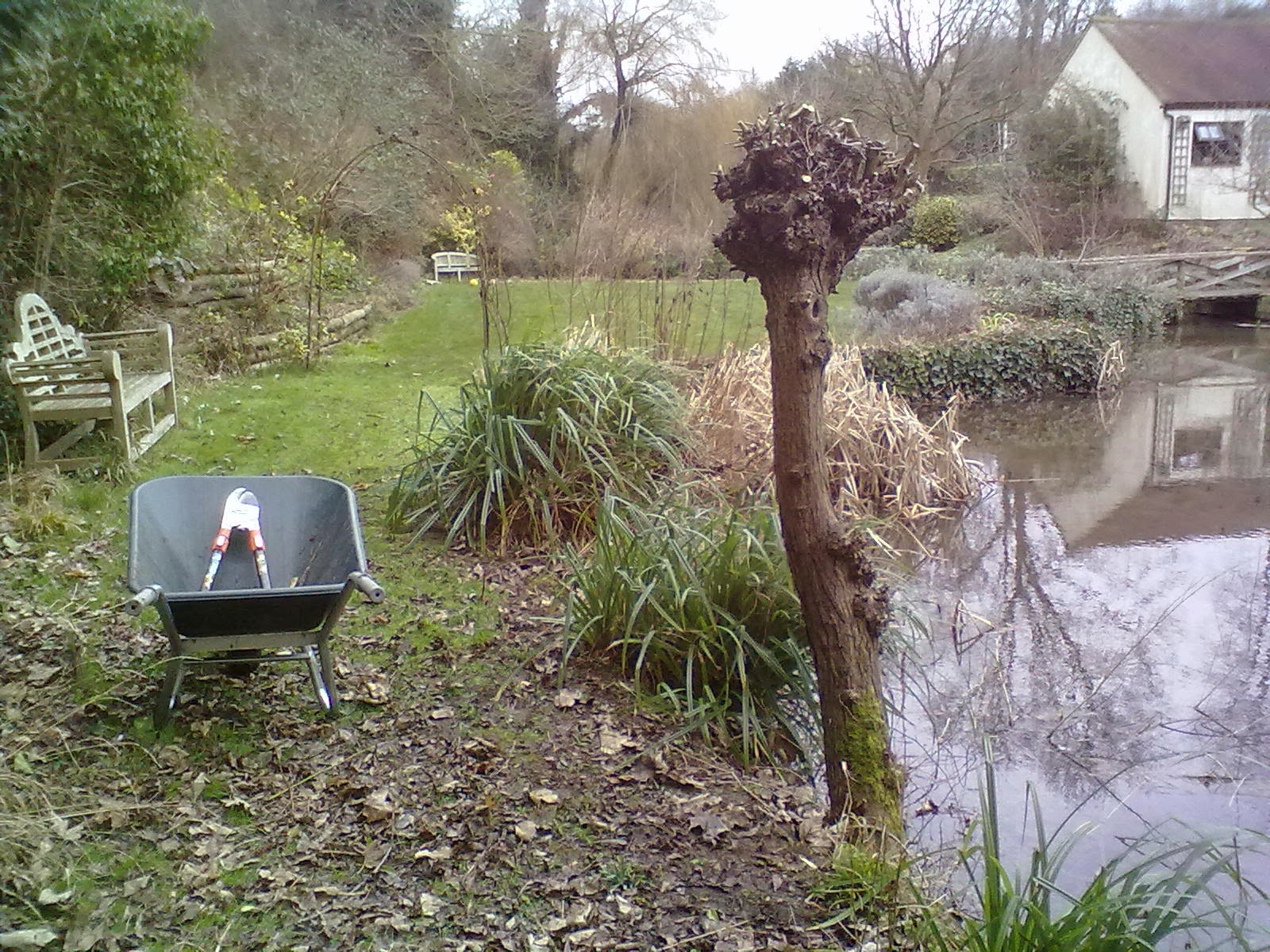 Here's the final effect from a few feet back: two wheelbarrow loads of offcuts taken up to the bonfire heap, all I have to do is a quick rake up of the smaller debris, put away my big loppers, and job done.

In this case, the off cuts are never long or strong enough to be of any use in weaving, which annoys me every year.

I think the cause is the heavy overhang of trees which put this side of the lake in deep shade for most of the summer, so I am gradually working my way along the lake path, chopping out the lowest overhanging greenery, in order to get more light on the path.


Mind you, I quite like keeping this particular tree small, as it is perfectly in scale when seen from the house. It also does duty as half of the hammock support on hot summer evenings!
Posted by Rachel the Gardener at 10:23