Earlier this year I subjected a thick stand of Solidago canadensis - Goldenrod, that is - to what is called the Chelsea Chop.

This just means chopping the tops off of selected flowering plants, to about half their height, in May.

The idea is that the severed stems then produce a group of flowers, instead of the single blossom, and somewhat lower down than you would get if you left them uncut.

It's called "Chelsea" not because it's done by yuppies braying "Air, Hair-lair, gorsh, must chorp thows flaaars" but because the cutting is done around the time of the Chelsea flower show. So it's a handy reminder that it's time to get out there with the secateurs.

As always, there is a trade-off:  on each stem, you are sacrificing one large tall flower, for the hope of getting several slightly smaller and lower ones, a little later on. It works well with all sorts of herbaceous (ie "flowers every year, dies down to nothing over winter") plants, and can be useful if you have flowers that tend to flop.

It's the sort of thing we do if we want a mass of Chrysanthemums, although the old boys growing them for competition would go the other way entirely - not only avoiding the Chelsea Chop, but removing all buds bar the central one, on each stem, to get one single massive flower. Which is fine if you just want to win a prize, but not so useful if you want a beautiful flowering border throughout the summer.

One of my clients has a massive thick stand of Goldenrod (not my favourite plant, I have to say) and every year they flop forward in a messy tangle over the grass, until I am forced to chop the front few off at ankle height just to save them from being eaten by the mower.

Last year I wondered if I could apply the Chelsea Chop selectively,  just to those first few stems at the front, so I made a note in my diary and this year I remembered to chop them (cue maniacal "mwaaah haah haa!" laughter) good and early, and this is what they looked like back in May: 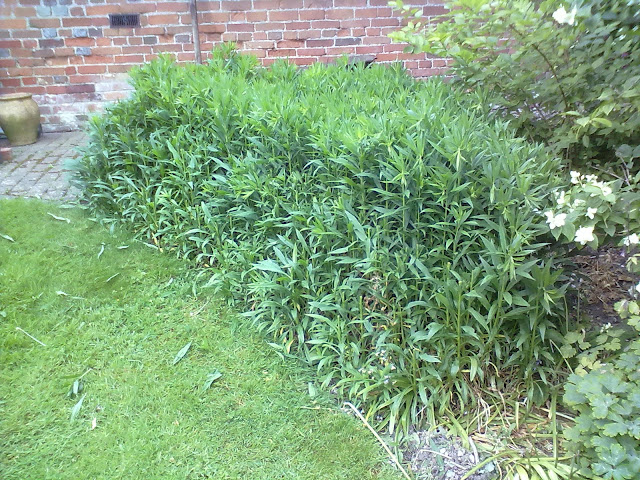 "Slightly terrifying" would be the description - have I ruined them? Will they respond? Will the client even notice? (no, they didn't.) I did a sort of casual layered arrangement, sloping up from front to back.

And this is what they look like this week - the original tops are flowering nicely, the lower ones are just starting to flower: 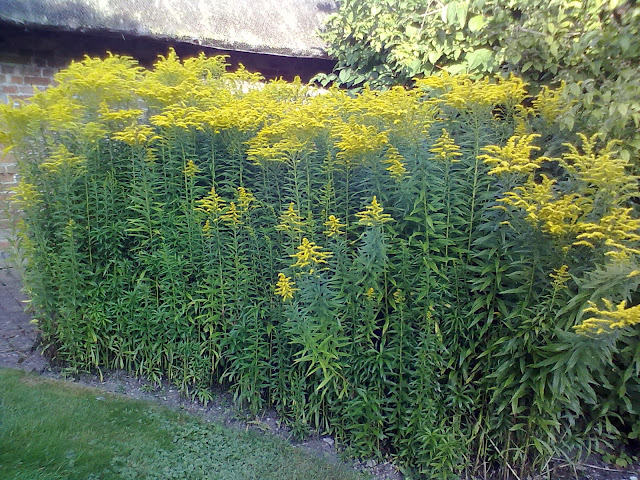 So not only do we get a "bank" of blooms, instead of the usual top-heavy green-mass-with-yellow-froth,  but we get a longer-lasting flush of lower blooms, so that when the top ones have gone brown and been chopped off, there will be still be the lower ones, flowering. 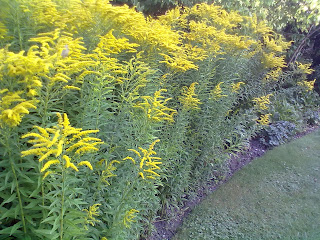 And, best of all - just look at this sideways view!

All standing stiffly to attention instead of flopping all over the place: the lower, chopped, stems are actually supporting the next layer of originals.

This is what I believe is called a "result".

Next year I shall be even more radical, and will chop the first several rows, rather than just the first few, in order to get a better "bank" effect. 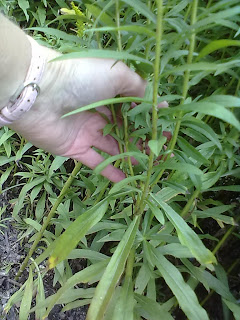 Here is a close-up of the stems which I chopped three months ago - as you can see, each one has branched into four or five smaller stems, each of which is topped by the familiar yellow raceme at the tip.

Some of these smaller racemes are already opening, as you can see in the second photo, and some of them are yet to start, which means they will be going on for another couple of weeks.

I'm delighted with this technique, and will certainly be repeating it wherever tall plants threaten to fall over.

I wonder if it would work on Sedums? People are always asking me how to prevent them falling open in the centre, as they tend to do: to date, I have recommended cutting the central stems down to a couple of inches early in the season, which virtually is the Chelsea chop, now that I think about it... perhaps next year I'll try it officially, and see what happens.

Anyone out there already doing this? Do let me know!

Posted by Rachel the Gardener at 18:02