Prettiest garden seat in the west?

Or the east, for that matter... Lookit this!

Is that not the cutest garden seat you've ever seen?

So this is why my client had me chopping back the mighty laurel last month!

It arrived last week, while I was there working, and we had to get the delivery men to take it apart in order to get it into the garden, due to a 1" miscalculation as to the width of the stone gate... and the surprising resistance of the arch in the yew hedge, which was our back-up entry plan.

Still, it only took a couple of screwdrivers and five minutes to get the back and the roof off, then the components were carefully brought in (I would, at this point, use the word 'manouvre' but I don't know how to spell it) through the gate, and reassembled.

Well... not quite.  I wasn't keen on the concept of a wooden seat sitting on grass... partly for the "it will rot the legs" aspect, partly for the "you will never be able to cut the grass properly and it will tickle your ankles" problem. So I suggested that my client ask Ray, handyman and general good bloke, to build a little area of hard standing for it to sit on.

I'd seen some concrete slabs out by the leaf mould bins - as an aside, it often surprises me that I know what "junk" lives in hidden corners of my clients' garden, better than they do: actually, I suppose it shouldn't be a surprise, as I'm the one who gets sent to poke around in all the odd corners, to hide things, or find things, or move things...

...anyway, I made the suggestion, and we clambered round the back to look at the slabs.

"Well," said my client, "I never knew they were there!"

I only knew because a couple of years earlier we'd had problems with muntjac deer getting into the formal garden from the meadow, as the yew hedge is not solid at the bottom, despite it's solidarity at the archway. I had spent some hours rigging up a line of chicken wire at the base, to keep the deer out, and to be invisible from the garden, which was quite a trick.  And I remembered those slabs, as I had to move them to get the wire right to the end wall.

There were also quite a lot of bits of proper stone slab, but only broken bits and odd shapes: we were tempted by them (my client, being a lady of taste, would clearly have preferred nice stone to modern concrete) but I pointed out that the seat would need to sit flat and level, and they would be hidden underneath it, anyway.

So this week, I arrived to find the plinth beautifully laid, with a red brick edging to a) made it wide enough and b) to tie in, style-wise, with the brick-edged light gravel path nearby.

I was so thrilled! It's not often that you imagine something, describe it to someone else, who describes it to a third person, who then builds it exactly as you'd imagined it!

And I particularly liked the wooden foot rest...

Here it is from afar, nestling in the back corner of the garden: 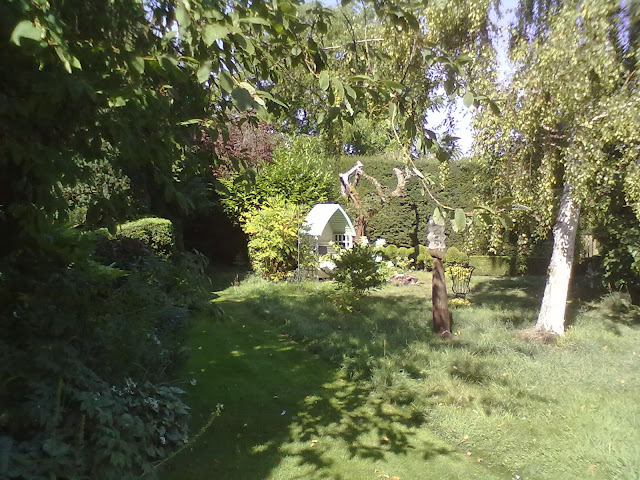 Isn't that just lovely?
Posted by Rachel the Gardener at 10:43