When a shrub  has had a chance to establish itself, there comes a point where it stops being a thing of beauty and becomes a monstrous glowering thing, slamped down to the ground and looming intimidatingly over everything around it.

This is the time to take action!

Here's a Euonymous in one of my clients'  gardens: it was doing very badly in the formal garden, it had been planted for a year or two and was doing nothing, so I was instructed to dig it up and bin it.

As always, I pleaded for the life of the plant -  "can't we pop it in somewhere else to see if it will pick up?" -  and my client agreed that we would put it out in the meadow to see what happened.

I duly dug a hole, dug it up, planted it in the hole, watered well, and left it there. It received no special attention  for, ooh, two years I think, until last year when I noticed it was getting a bit untidy, and trimmed back some of the longer branches.

This year I was doing some clearance in the meadow - more of that later - and I noticed that it was flourishing. Now this is a good thing, you might think: well, yes, but it was looking heavy and untidy, and was encroaching on our carefully nurtured patch of Soapwort (Saponaria officinalis, and yes, people really did use it for washing with).

My client agreed that it was looking cumbersome, so I cut off most of the lowest branches, up to about a foot off the ground, along with some of the longest arms,

Here it is Before: yes, that lumpy thing behind the purple tree (an upright form of Acer platinoides with crimson foliage) 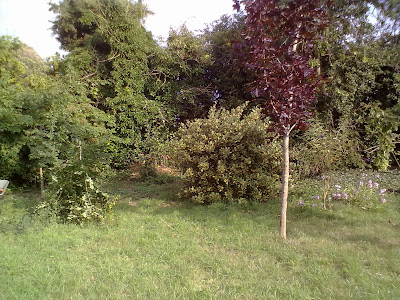 And here is After: no, I don't know why the colours are so different, considering the photos were taken the same morning, about two hours apart! 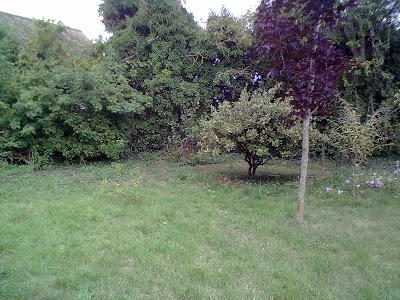 As you can see, it's still an informal shrub, with a "wild" outline, but instead of hugging the ground like a hefalump, it now has legs!

This is a very simple treatment, which works for most shrubs: you don't have to reduce it down to one stem like a lollipop, in fact the multi-stemmed look is very trendy at the moment: just remove all the minor branches and skinny bits.

As always with these jobs, it's best to do a preliminary chop, then stand back and assess it to ensure you don't go higher than planned.

This particular one was straightforward, being a stand-alone, but the same principle works on shrubs in borders or beds: you just have to be more careful where you stand while you are doing it.

And yes, it did involve crawling around on hands and knees (" oow! oow! nettles!") underneath the shrub, with my hair all on end and spiders down my neck, but that's what my client pays me for!

Posted by Rachel the Gardener at 06:59