Hydrangeas: time to wrap them up for winter

Well, to be honest, you should have done it before Christmas, but we've been lucky with the weather, it hasn't actually snowed yet, nor has it been particularly cold, but it can't last much longer.

This was one of my final jobs of the year,  wrapping up the Hydrangeas against the expected winter cold, but if you haven't done it, well, there is still time.

This is for Hydrangea macrophylla, of course, you don't need to do arborescens or paniculata.

Pardon? Which one is which? *laughs* Oh, all right, here's the Simple Guide To The Main types of Hydrangea:

1) H. macrophylla. Mophead, Lacecap: this is the sort that most people know. Big bushy shrubs with huge rounded bundles of flowers, or flat dinner-plates of them.

The flowers can be blue if you have acid soil, but are more usually pink.

They need protection over the winter as they flower on last year's growth. If it's damaged - no flowers!

2) H. paniculata. These are the ones whose flower heads are not round or flat, but are pyramids or spikes.

One of the best is H. quercifolia, especially the double flowered version. I have just had to dig one out from a clients' garden, where it had rather outgrown it's welcome, and it was such a beauty. *sigh*. Never mind, we took several cuttings of it last year, one of which is already planted out in one of the shrubberies, and the client was kind enough to give me one of the cuttings for myself.

I'm now jealously guarding it, in the hopes that next time I move, I'll get a garden big enough to plant it out!

3) H. arborescens. Ah, good old Annabelle. One of my favourite flowering shrubs. Easy to grow, easy to look after, fabulous flowers, what more could you want?

They flower on this year's wood, so you can tidy them up as it suits you in autumn. By that, I mean you can leave the dead brown flowerheads in place if you like that sort of thing, but if you don't, you can either trim them back to a neat shape, or chop them right back.

4) Mustn't forget H. petiolaris - that's the one that climbs up walls, houses etc. There's not a lot you can do about protecting them over the winter! And they don't need it, generally speaking, they are as tough as old boots, even on north-facing walls. Personally I generally trim back any branches that are heading outwards from the wall, in case they get ripped by wind or snow: and in the autumn I am usually also responsible for taking out any too-adventurous limbs, that are heading for dangerous territory, ie windows, gutters, or out of my reach generally.

So, where were we: oh yes, Hydrangeas petiolaris, arborescens and paniculata don't need protection, but macrophylla do.

First job: clear out as many of the old leaves as you can, they just rot and form a mush that invites slugs and snails in to lunch.

Second, don't be afraid to cut off any badly misplaced branches: for instance, I like to keep the branches clear of the ground, and I'm always prepared to snip out any that are too low.

Thirdly, wrap the bush around with something like horticultural fleece, or hessian. NOT bubblewrap! More of that, later.

Fourthly, tie it firmly with string or twine. Make several circuits of the plant, and tie in bows rather than in double knots, so that as it loosens - which it invariable does - you can undo, tighten, and re-tie the strings.

Here are some I did earlier: 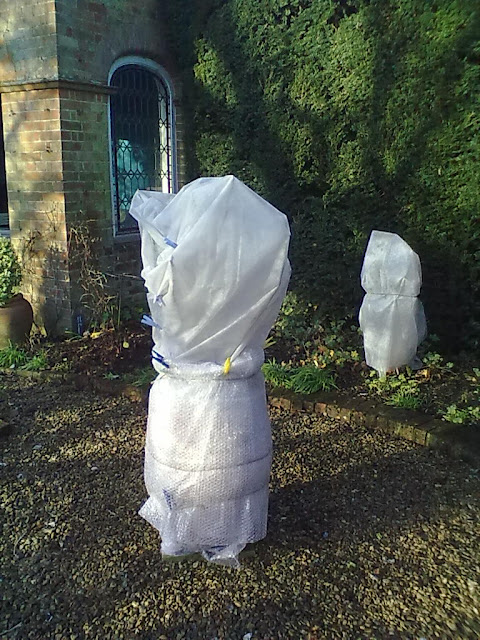 Right! Who spotted the deliberate mistakes? Of course you did - the one in the back isn't quite finished, it only has one loop of string: and the one in the front is of course a pot and a plant. It uses clothes pegs, and it's not even a Hydrangea, it's a Fig! Well done. But the principle is the same, honest.

Right, back to the bubble-wrap issue, mentioned in "thirdly" above. You will observe that the pot part is wrapped in bubble-wrap, but not the plant part.

There's a reason for that: bubble wrap is excellent insulation, top-notch, and is just the ticket to protect the terracotta pots, as well as protecting the soil (and roots) within that pot, and the protection in this case is against freezing. Roots that are underground are not touched by the frost, but roots that are just one thickness of terracotta away from frost are not protected, and this can kill or seriously damage a plant.

However, what is bubblewrap made of? Correct,  plastic. So on a day when the sun shines, the moisture in the soil, in the plant, in the decaying leaf matter all evaporates and then condenses on the inside of the plastic. This leaves the tips of your precious plant - ie the bits with the buds on -  sitting in a warm soup, perfect for rot and mould, not to mention slugs and snails.

The reason for using horticultural fleece and hessian are that they "breathe", they let the moisture out on warm days, while still keeping off the worst of the rain. And, of course, keeping the frost off, which is the most important thing.

So please, don't wrap plants in plastic or bubble-wrap, save that for the pots. Use some sort of breathable fabric for the living part. Horticultural fleece is great as it is lightweight, cheap, it breathes, it keeps most of the rain out, you can buy it in great long lengths, and it doesn't soak up the water. I mean, you could use old tea towels if you wanted to, but can you imagine how heavy they'd get? Really, it's well worth buying a roll of horticultural fleece. If you wrap the plants quite firmly, and tie it tightly, it won't get ripped or torn, and next spring it can be shaken out, folded up, and put away ready for the winter afterwards. It should last for years.

So there you go - one roll of fleece, one ball of string, a pair of scissors, a pair of secateurs, and off you go!
Posted by Rachel the Gardener at 09:14