Yes! It's that time, the Hellebores are starting to flower, and once the fallen sticks had been picked up (see yesterday's entry) it was time to remove the horrible old leaves.

Now, I know that there are two schools of thought on this subject: some people leave the leaves in place to protect the plants, and to protect the flowers in  particular.

But other people - my clients amongst them - prefer to have the old leaves removed as soon as possible, so that we can see and enjoy the flowers.

Either way, there is always the need to remove dying leaves, or leaves badly infested with Leaf Spot: I tend to do this as soon as I see any, and I think it's good practice to clear out about a third or a half of the leaves.

Back in October, I performed this task in what we call The Perfume Bed, a long border filled with scented shrubs: it used to be bare earth underneath, but over the last three or four years the client and I have gradually filled in the understorey, in order to extend the season of interest into winter and early spring. We now have bluebells here, snowdrops, winter aconites (just starting to peek out now), Polemonium or Jacob's Ladder - which is not particularly scented but we like the flowers - and a lot of Hellebores.

We started with just three sad plants that had been there for some years: we added a handful scrounged from another client of mine in the same village, and I have diligently moved any spares from other parts of the garden into this bed.

And now, after just a few years, we have a really good covering of plants, and each year I transplant a few more of the Eranthis (winter aconite) and I reckon that in another year or two, the bed will be quite stuffed!

Back in October, I checked the beds and decided it was time to thin out the Hellebore leaves: 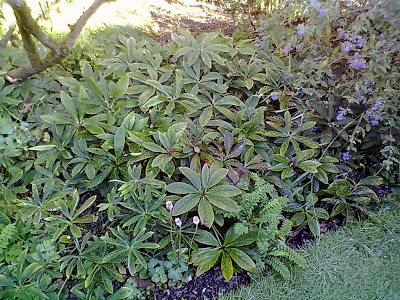 As you can see, they were a solid mass, and quite a few of them were starting to show black patches.

Now, this may or may not be Leaf Spot: it doesn't really matter if it's disease or just natural decay, black leaves are not photosynthesising, they are not helping the plant, and they are actively encouraging those dustmen of the garden, slugs and snails.

So it's good practice to remove them.

I went through this bed and removed about half of the leaves, taking particular car to remove any with any signs of blackness or general tatty-ness. 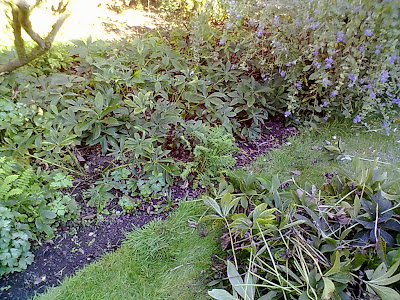 Given a choice, leave the freshest, youngest leaves in place, and cut out all the oldest tattiest ones.

I say "Cut them out" and of course I mean with secateurs: clip the stems as low down as you can, taking care not to knock the tops off any buds that might be just appearing at ground level.

Doing this in October is easy, as there won't be any flower buds at that time, and the most you are likely to do is to injure a new leaf, which is not catastrophic.

You can see the pile on the grass, of the ones that I removed:  and you can see that the bed looks generally less over crowded than before.

So, that was October, and now it's January.

Those fresh new leaves have, in turn, become old, tired, and battered: and are now spoiling the look of the new flowers just emerging. 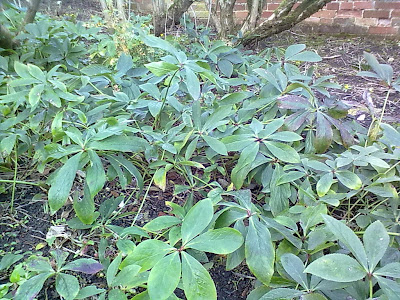 Here's that same patch of the bed, as it looked Before.

As you can see, no bad cases of Leaf Spot, but many of the leaves are starting to go brown and die off.

Out with the secateurs, and off we go again.

This time, additional care is needed in not damaging any buds, or flower stalks. 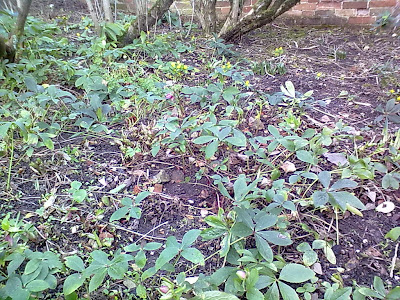 Also, you have to watch where you put your feet!

My general rule is to start at the back of the bed, or the middle of the clump: remove the leaves and work backwards, so you don't accidentally tread on a newly-cleared flower clump that might not be so easy to see.

It looks a little sparse in this "After" photo - as mentioned several times, I'm not good at plant photography! But in real life, it looks greatly improved, and you can clearly see all the new flowers. 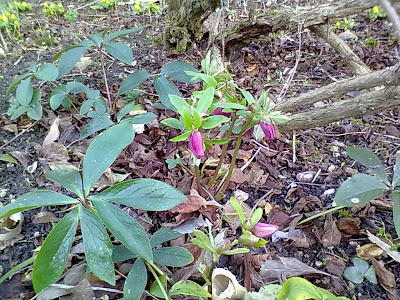 So here are a couple of close-ups, to prove that there really are flowers to be seen now:  we have mostly two colours of Hellebore, a medium-to-dark pink, and white.

Some years ago, I was very interested in breeding Hellebores. I learned quite a lot about what's required, and made some effort with this collection.


As a result, we don't have many of the wishy-washy inbetween colours,  just a nice contrast between the pink ones... 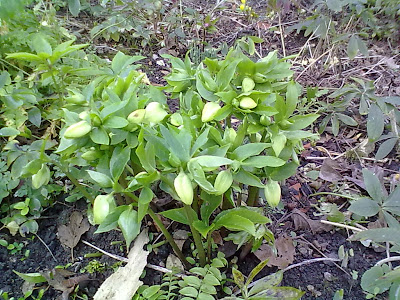 ...and these lovely white ones.

Ah, now I can't wait for them all to open up properly!

The only disappointment about Hellebores is the way the flowers hang from their stalks, so you have to get in amongst them and turn them upwards to fully appreciate them.

Apparently, the way to do it is to cut them off, bring them indoors, and float the flower heads in bowls of water on your dining room table.

Hmmm - I think not! I'd rather go out and bend over them, myself.

What was that lovely quote about not having flowers indoors? "Don't you like flowers, Mr So-and-so?" asked the snooty lady. "Madam," came the reply "I like children, but that doesn't mean that I want to cut their heads off and display them indoors."

Posted by Rachel the Gardener at 11:17