There is an increasing concern in the UK about mosquitoes - it seems that mozzie bites are on the up and up, and the number of bites reported to doctors has increased by 250% against figures from 10 years ago.

We are lucky here in the UK that malaria is not a problem, even though we have mozzies: as there is no malaria in the country, the mozzies can't spread it. And we no longer have malaria as we have pretty well drained all the marshes in which they breed, thanks to the work of Doctor Ronald Ross, who worked out - back in the late 1800s - that mozzies carried malaria, and that they bred in the marshlands. The work of draining marshlands continued for decades, and by the 1950s malaria was a thing of the past.

So to us, it's just the annoyance of itchy red bumps. I won't add pictures - if you don't know what a mozzie bite looks like ("lucky you") just Google it and look at Images.

Apparently the main reason for the rise in mozzie bites is that there has been an increase in breeding sites for them: they like standing water,  and they need 10-12 days for their eggs to hatch, go through the larval stage and turn into adults. This is why marshes and swamps are so perfect for them. However, as well as our nice convenient sewers and drains, which have any amount of small areas of still water,  we now have vast numbers of water butts, water features, bird baths etc. Perfect.

So what can we do?

1) Bird baths - keep changing the water. Daily, preferably. Just tip it out, onto a flower bed to avoid waste, and fill it up again. Don't top it up - tip out the old stuff.

2) Water butts. Cover with a lid, and make the lid as close-fitting as you possibly can. Use foam rubber to fill in any gaps around the down-pipe, if it is the old-fashioned sort. Add goldfish! As mentioned earlier, I have a couple of fish in my uncovered water tank, and they are keeping it completely clear of all larvae. They have been so successful that I have had to start feeding them!

3) Water features: run them! The point of a water feature is to bring sound and movement into the garden, so let them run. Or go for the sort that has a hidden reservoir, with pebbles or stones on top, so when you turn it off, all the water runs back down out of sight.

4) Remove standing water: clear away old paddling pools, old tyres (how many of you have old tyres lying around in your gardens? Actually, more than you would think....), buckets, pots, saucers, old planters, anything that holds water. Clear blocked gutters and down-pipes so that water can drain away. Fill in hollows in paths etc where puddles form.

Eliminating the breeding areas is cheap, simple, quick, and can make a huge improvement, if you are being pestered by mozzies. 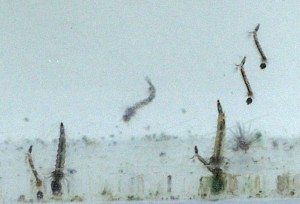 Now, in case you are wondering if you have them or not, this is what mozzie larvae look like: and this picture is very nearly life-size, they are about the actual size of the two on the right. Or maybe a little smaller... anyway, clearly visible with the naked eye.

They "hang" under the surface of the water, breathing through their tails, and when disturbed they sink down away from the surface, then make their way back up again when they think you aren't looking.

They do this with a wriggly, double-jointed motion.

So if you are unsure, look for little wriggling things either dropping down, or coming back up to the surface.

The classic way to prevent them breeding in water butts is to add a drop of oil or detergent to the water - this forms a thin skin which prevents them from breathing. Olive oil is probably better than petrol.....

...but I have found an interesting "natural" preventative measure for mozzies. Yes, finally we get to the Chrysanthemum connection!

I read a comment saying "put a chrysanthemum stem in the water butt to prevent them breeding". This seemed a bit unlikely, so I researched it.

Apparently two types of Chrysanthemum contain Pyrethrum, which is a naturally-occurring insecticide. It appears that you collect and dry the flowers, then crush them and add to water to get the chemical out. It is fairly harmful to humans, by the way, so do it carefully - but it's extremely harmful to mozzies, and actually stops them breeding.

So, "a stem" of a random Chrysanthemum is unlikely to help, but you could try floating a flower head or two of Chrysanthemum. cinerariifolium and C. coccineum in the water butt.

Which ones are they? 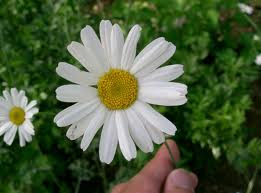 Also known as Tanacetum cinerariifolium just to confuse us further.

There is a lot of confusion over how to actually use these flowers: most sources agree that you dry the flower heads, then crush them, and they retain their potency for many years in this state. 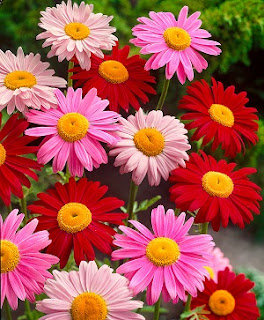 To use them, you mix them with water and use the result as a spray.

This one, [left] is C. coccineum by the way, as you would expect from the pinkish petals. Much prettier than the white version.

Where were we? Oh, yes, confusion. I found one site recommending that you smear the flowers onto your bare skin to repel mozzies.

I found another site stating that "Prolonged contact with the dried flowers can lead to allergic dermatitis, allergic rhinitis and asthma" which is a bit worrying.

Yet another site suggested that it was the central yellow disk that contained the active ingredient.

So the moral of this story is that you can find anything on the internet, but you can't always believe what you find.

However, I think we can draw one conclusion: a  random stalk of a random chrysanthemum probably won't do the trick, but you could try a flower or two of one or other of these specific chrysanthemums.

Ideally we need someone with two water butts side by side, who would be willing to float the flowers in one but not in the other, then observe the quantities of larvae to be seen, to see if there is any reduction. Any volunteers? I would, but all my home water butts are tightly lidded.

Posted by Rachel the Gardener at 09:03