...and everything you have ever wanted to know about them.

Ever found neat oval holes in the leaves of some plants? Ever been told "ah, those are made by leaf-cutter bees, nothing to worry about, they don't hurt the plants."  Ever wondered if that was true?

Well, as I've mentioned, I have been potting on large numbers of my plants recently, ready for moving them up to the Yard where they can grow on ready to be sold next year.

And I found several with bees in them: 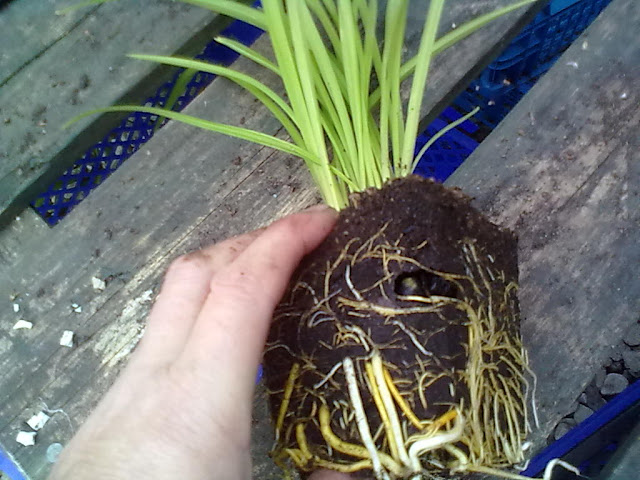 Can you see it? A large bee - the sort that I, not being a naturalist, would call a Bumble Bee, but of course they weren't - cosily tucked up in a hollow in the soil of my potted plant.

Fully grown, fluffy: quite immune to being dropped on the bench to the accompaniment of girlish screams: and apparently not-quite-asleep.  I found about five of these over two days - in each case they were then gently ejected onto the grass outside my garden, and in each case they buzzed back in, rather groggily, looking for flowers, so they didn't seem to be harmed by the experience.

A few days later, I was checking an odd pot of Ophiopogon planiscapus 'Nigrescens' - that lovely black grass that is a big favourite of mine - which had been left at the back of a rack for, er, rather a long time.  When I turned it out to weed it and check the roots, I found this: 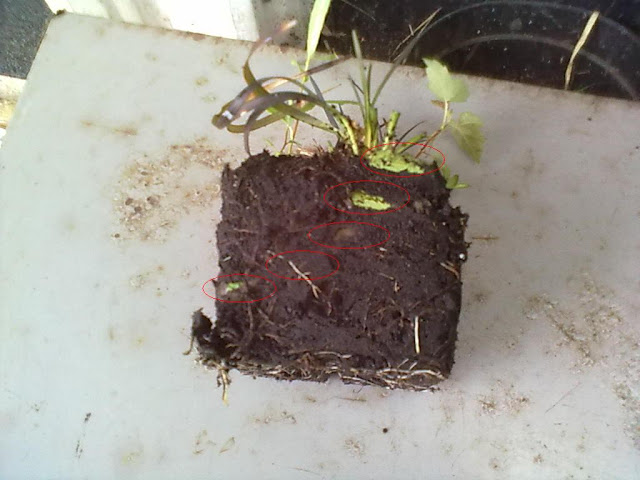 Or, rather, these: ringed faintly in red in the photo - a sequence of what I thought were big fat caterpillars. I carefully excavated them (with equal care for them, and for my plant!) only to realise that they were cigar-shaped wads of leaves, each sealed at the top - rounded at one end, flat across the other.

Having no idea what they were (as I'd completely forgotten about the "Bee" incidents ) I gently unwrapped one of them, to see what it was.  It came apart segment by segment, releasing a foul stench as it did so, until I got to the core of it, which was just a slimy mush of orangey stuff.

Intrigued, I took the next one and dissected that one - but this time it was fresher, and at the centre, I found a large white grub. For a moment I nearly had a "vine weevil heart attack" then  I thankfully realised that the grub was way too big, didn't have a brown head, and wasn't C-shaped: in fact, I realised I was looking at the pod of a leaf-cutter bee, with the forming bee still growing inside it. 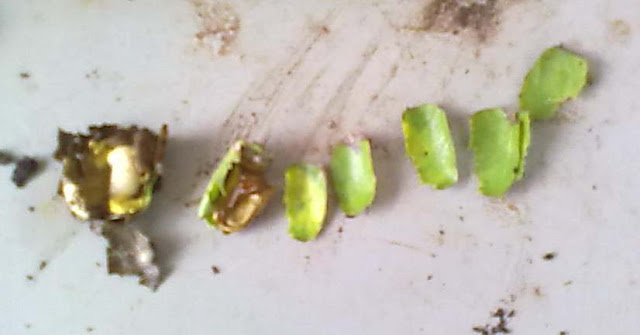 And yes, that is the grub on the left: sorry, by the time I realised what they must be, it was too late for this one. 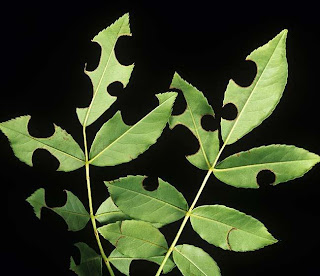 So if you have holes of this sort: if it looks as though a maniac with an over-large hole punch has been wandering through your rose beds (they are particularly fond of rose foliage) then there's the reason - it's a female leaf-cutter bee, stocking up on housing capsules for her off-spring.

The leaves aren't really harmed by this, although too much attention to one branch can be quite unsightly.

She takes the leaves back, tunnels into the earth - or my pots - and makes a neat pouch: then she stocks it with pollen, lays an egg, seals it up, then starts again, leaving them in the soil like a string of sausages.

Apparently - pause while I google it - the topmost one hatches first, then the rest in sequence, which makes sense. They tunnel their way out and fly off to enjoy life.

So the answer is, they don't really hurt the plant's foliage, they certainly don't harm the roots, so they don't need to be persecuted.

(Before I get emails of complaint, I carefully re-buried the rest of the capsules out of harm's way.)

So that is the story of the leaf-cutter bee!