The Little House in the Trees

There - isn't this the best little hidey-house you've seen in a while? 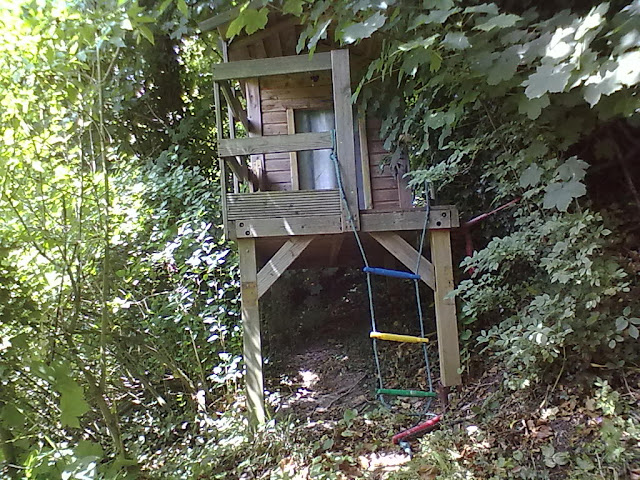 It lives half-way up a one-in-one slope, completely hidden by the trees, and accessible either by clambering up the steep, twisty path through the trees (with only a slender pink rope for assistance) or by risking a broken neck by descending from what we call "the upper path" which runs above the tree-house, somewhat higher than the roof-line.

Although it looks as though it's been there for years, it only arrived last year, and it took six strong adults to get it heave-ho'd into place. Luckily I missed out on that, as apparently there was a lot of swearing involved.

Ah, I work in some lovely gardens.

So, what have I been doing since (checks back through blog guiltily) the 19th of last month? Answer, working flat out: weeding, digging, lifting, splitting, planting, weeding, watering (yes, in some gardens I actually get paid to water the flowers! ) more weeding, oh, and did I mention weeding? The botany exam came and went, my Yard now has nearly 600 plants in it, and I am running out of bench space again, and the fish are healthy and definitely getting bigger.

Now we have strange August weather to deal with. Yes, folks, sun! Yesterday it reached 32 degrees (that's 89 degrees in old money, or "jolly hot" as I would call it) with enough wind to make me feel as though I were at the seaside. Not good for plants in pots, they are wilting and gasping both in the Yard, and in my own front yard.

So this is the test for those Prairie beds: this is the first year that we haven't watered them, and I've been there six years. Mind you, every year up until now I've been lifting plants - either to get out the couch grass running all through them, or to split and replant them. This year, they've been full, not too couch-grassy, hardly any thistles: good lord, I think I'm winning!

One other point of note today: during the winter, talking of Prairie beds, a substantial willow branch fell down across the path, so I did a hasty job with my trusty bow-saw. Not a neat job, not a tree-surgeon job, just a quick hack to clear the path, and to roughly chop the fallen branch into pieces small enough for me to roll across the path and into the undergrowth, out of the way, until the owners had time to bring the tractor mower round and move them to the bonfire heap.

Needless to say, that never happened, and the pile of branches (so glad that I stacked them neatly) is now a Wildlife Hotel.

But the main branch, despite my inelegant bow-sawing, now looks like this: 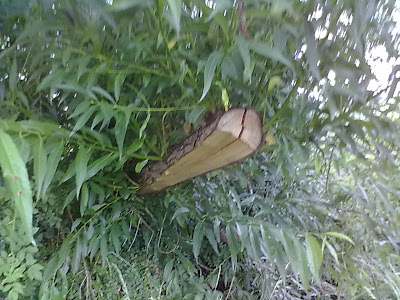 "Fumes of rage!" as Molesworth used to say.

If I had had any idea that they would not be getting the tree surgeon in to neaten it, I would have made a better job of it.

But as it is, it's a tribute to the robust nature of willow, that even the worst, hastiest, untidiest cut, leaving ripped bark, etc - all the things we are told not to do when pruning - can still leave the branch perfectly able to function, and to grow!
Posted by Rachel the Gardener at 15:32