I've had a few questions about Topiary, generated by last week's post, so here are some answers.

1) How do you train to do topiary?

The easy answer is to say "get out there and do it." Hmmm, not very helpful.  OK, go to your nearest B&Q or Homebase store, and buy one of their cheap Box topiary balls or cones. They're generally less than a tenner, and are a manageable size.

Take it home, put it in a pot, then use it for practice. Take your shears, or your topiary shears if you prefer - oh, sorry, digression, question 1) should have been "what are topiary shears". 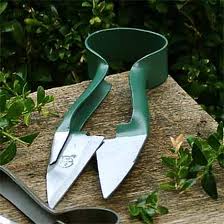 These (left) are topiary shears of the simplest sort: two blades joined by a handle that acts as a spring. They are based on early sheep-shearers.

You squeeze the blades together to cut, the spring pushes them open again, so they can be used one handed.

I suppose you could have one pair in each hand - very Edward Scissorhands - but I've never tried to do so. Hmm, maybe I will...

Anyway, these are known as Topiary Shears, as opposed to normal shears which are these things: 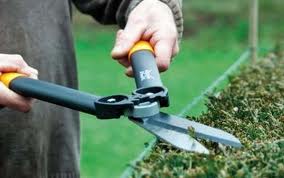 There you are, these are normal or garden shears. They need two hands to operate, but they cut a lot more with each snip.

Right, back to question 1) part II: how to train/learn to do topiary.

Take your shears, of whatever sort, and practice moving them over the shape of your topiary, without actually cutting it.

Look at the angle you are making - especially with the garden shears - and try to get them as close as you can to the plant without actually snipping.

Once you have got the feel of it, start just snipping the very tiniest bit off the leaves.

Leave it a few weeks until it is starting to look slightly "fluffy" then have another go, and this time, try to trim it back to where it was. You can generally tell by the colour of the foliage: new growth is pale green, so once you can see the older, darker leaves, stop snipping!

2) How do you cut a curve with straight shears?

I've never really known the answer to this one: I've watched myself doing it time and time again, and I still can't see quite how I can cut a smallish ball using long bladed garden shears. I just do it!

I suppose you have to think of it as making a curve from a large number of straight lines: if you cut enough of them, the overall effect is a curve.

Also, garden shears can be held in two ways: the normal "up" way, and upside down, which is the best position for cutting the far side of a straight-sided hedge. It means you don't have to lean over so far.

3) What are the best plants for topiary?

The usual suspects include Box, because it grows slowly, the leaves are small, it re-grows if you cut it back to brown wood ("oops") and it holds a shape nicely.

Yew ditto, it makes a very dense shape and will definitely come back ("break") from old wood if you need to be drastic.  But not Irish or Fastigiate yew - that's the slender upright one - it has to be English yew.

You can also do basic shapes with any of the small, shrubby Euonymus: just simple domes or squares, as long as you don't mind them being a bit imprecise.

Lonicera Nitida is also very good, but it's very very fast-growing. So, topiary has to be re-done every few weeks instead of twice a year: but it does mean that if you make a boo-boo, it will quickly recover, so it's good for beginners.

4) How do you start a topiary from scratch.

Let me tell you about Brian. 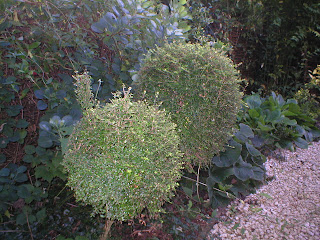 I kept two sticking-up branches on the front, smaller, portion, to be made into his antennae.

Here he is in September of 2005, looking pretty featureless, but clearly some sort of proto-snail.

Actually, he wasn't called "Brian" at that point, he was just "the snail" or "oh good, she hasn't noticed yet."  Or possibly, "Can you tell what it is, yet?"

Every few weeks I would just trim over the balls, to get a thicker, denser shape. 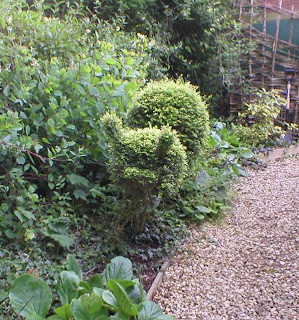 Here he is the following year, 2006, round about July.

As you can see, I've shaped in a bit of a nose at the front, and the two antennae are thickening up nicely, if somewhat askew.

I was using the garden shears for most of him, and secateurs for the antennae.

Note: never do topiary on a windy day.  Nearly cut off one of the antennae, once! When doing delicate parts such as the antennae, I find it best to hold the part steady with one hand while trimming with the other.

By now my client had noticed him, and luckily loved him, especially for the grandchildren who thought he was great. 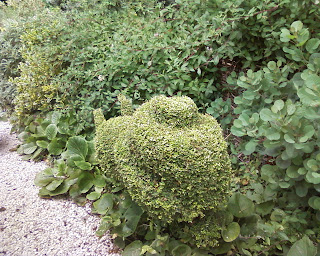 By 2009 I'd put in a curved shell, and you can see that he's fattened up quite nicely.

All went well until my friend Jim went round the garden one Open Gardens day, and pointed out that a snail's shell does not curl round on top like this: it curls round on the side of the shell.

You'd think I 'd see enough snails to know.....  so, I then had to cut out the shaping and start again.

First I spent a little time hunting for a real snail....had a good look at it....realised what I should be doing..... so, I re-cut the back ball into a plain ball, chopping through the steps of the curve as though they weren't there, and revealing a swathe of apparently dead brown edges. Not a pretty sight! But within a couple of weeks it was greening up again, and then I could re-shape it, this time with the curve on the side. 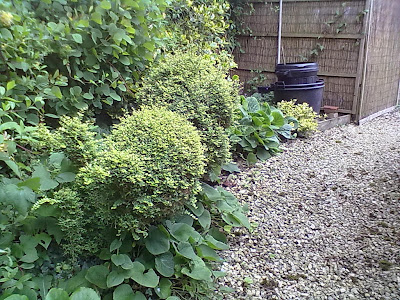 Here he was yesterday, before clipping.

As you can see, he's quite fluffy, and this is about 2-3 weeks' worth of growth.

Nitida does grow quickly, but as I said, it means that if you make a mistake, you can have another go in just a couple of weeks. 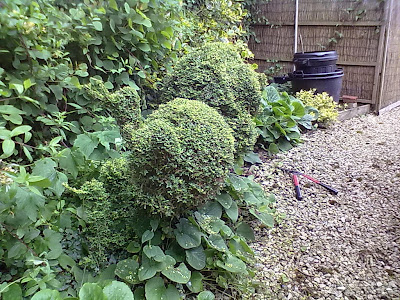 And here he is after clipping.

It's not easy to see in these two photos, but his antennae are now going up, then curving forwards and splitting into two.

It was worth having that close look at a real snail.

In case you wondered, yes, he is now "looking" to one side, and the reason is that he has a liddle baby snail by his side.

I found a small seedling next to the original plant, and I'm slowly encouraging it into a similar but much smaller snail-shape. 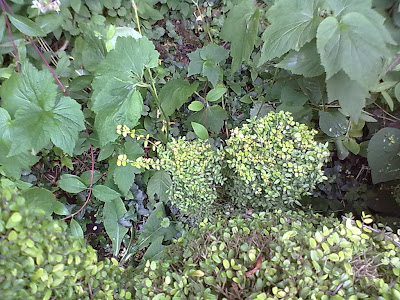 Here it is, seen from above, looking over the body of Brian.

Or should that be Bryony, now?

Anyway, you can see the same principle: take whatever you have, and turn it roughly into the shape you want: keep clipping it again and again, and it will soon become quite a solid, firm shape.

There, I hope that's answered a few of your queries, do feel free to email me if you'd like more details about any aspect of Topiary, or gardening in general.
Posted by Rachel the Gardener at 20:23