Yes, it's already June, the days are just flying by, and I have been too busy gardening to do much blogging. Oh, and research visits: I've been to Grays Court and to Sudely Castle recently, purely for research (honest!) and have enjoyed looking round their gardens and answering questions.

Yes, even when I go and visit someone else's garden, I still end up answering questions! At Sudely Castle a woman was anxiously - and loudly - looking for the name of a climber, and I felt compelled to help her out, as it's one of my favourites: Actinidia kolomikta. 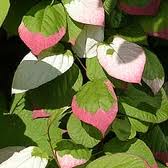 There you go, great, isn't it? It's a climber, and the leaves start off green but then go white with pink edges, so you get a wonderful waterfall of colour, looking as though it's been raining pink.

I have two small cuttings of it in the "specials" section of my front yard: I took them over two years ago, and of a dozen cuttings, just these two remain. One is a bit of a non-entity, but the other is suddenly putting on some growth, so I might just have to pot it on and maybe put it somewhere sunnier.

Of course, I then had the pleasure of her company for some time, as she had a stream of gardening questions... I don't mind, actually, I could talk about gardens all day! But I managed to tactfully give her the slip after a time - after all, I was there to do some serious research, not to enjoy myself!

Today, no time for research, hard work up at the Yard: it was pointed out to me that pallets are actually quite good bench substitutes, being a) free  and b) slatted for good drainage. So, it was round to the disused stables and a merry afternoon digging in the straw of ages, to unearth half a dozen of them then cart them round into my Yard on the trusty, rusty wheelbarrow. 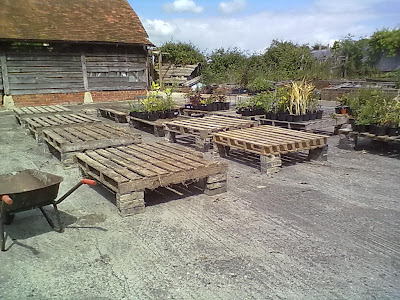 Here they are, propped up on spare old bricks to make it easier for me to water and check the plants.

OK, not the most stylish of benches, but they were free! The bricks are just on loan, there are piles of them lying around - as there are in most disused farm yards, it seems! - and presumably, or hopefully, they will be re-used when the old stables are knocked down and re-built.

In the meantime, they are being useful for me. 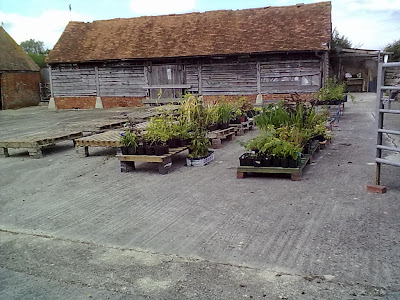 Here's the yard as it looks today: it's becoming populated with plants, and so far I haven't had any problems with bunnies or slugs. (*touches wood*)

The biggest problem so far is the wind: it's a windy place anyway, being at the bottom of a slight valley, and the actual yard is a bit of a wind-tunnel.

This means that I have to water most days, even if it's overcast, as the wind is drying the plants out more than the sun.

Another job today was to bail out the water tank: we are due some heavy rain tomorrow, so I wanted to get it emptied and refilled with fresh water. I made a slight mistake, I didn't realise that the roofs which drain into it are covered with that lumpy mossy stuff, so when it rains, it gets washed down the drainpipe into my tank. Then it changes into disgusting black spongy stuff, and eventually the water went very cloudy, with a thick layer of silt on the bottom.  Ooops! I've now fixed up a filter (an old kitchen strainer) over the end of the downpipe, so hopefully once clear, it won't get as mucky again.

I have been considering putting a lid over most of it, to stop the water going green, but the plants won't mind, and the fish don't seem too worried, so I probably won't. Yes, I still have fish in my tank! I hadn't seen hide nor hair (fin nor scale, possibly) of them for some time, and I was a bit concerned that the soupiness of the water might clog up their gills. However, the masses of mosquito larvae had completely disappeared, leading me to believe that they might still be alive in there somewhere.

Yup! As the level dropped, there they were: first Bill appeared and was put aside in a bowlful of soup water: then Scott appeared to see what was going on, and took a trip in the net to join Bill: and eventually, when I was down to the last 2" of water, Bram Tanking finally whooshed around the tank, playfully avoiding my net until the last possible minute.  So there you go, goldfish in water butts do indeed eat all the larvae, and they don't seem to mind if it gets quite cloudy and revolting-looking.

Now on to much prettier subjects: robins. Yes, we all love robins in the garden, and here is the little chap who belongs to my morning garden: can you see him, sitting on the handrail? 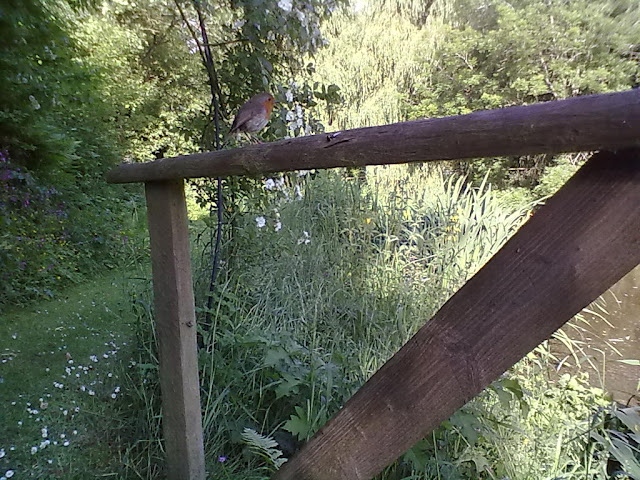 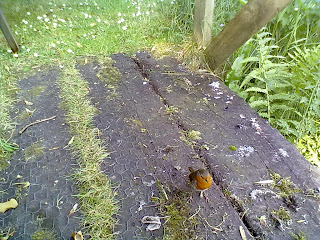 Not content with being that close, he wanted to walk right round my feet, and here he is quite literally at my feet while I was trying to weed the bridge.

As you can see, no fear at all, just an insatiable appetite for small edible things.

He followed me all the way round the lake, as I progressed slowly with the wheelbarrow, weeding as I went.

Oh, must tell you about this:

I'm sure you're all familiar with Cotinus coggyria, the smoke bush, and particularly the purple-leaved one; well, I was pruning one the other day, with the client calling out "down a bit - now that big one - now the one at the back!" to get the bush into a more balanced shape.

When we'd done, she collected all the cut branches, and look!  What a great Goth wedding bouquet that would make! 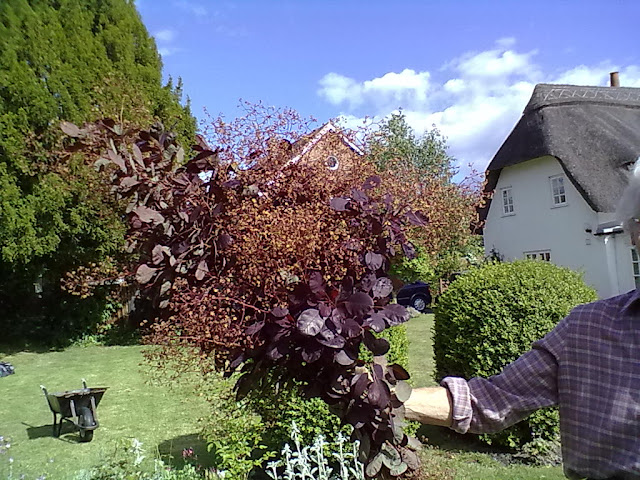 The photo doesn't do it justice, with the light behind the airy flowers, the effect was fantastic. So any Goths out there thinking of getting married in character, leave it until about this time next year, and choose Cotinus as your bouquet....

Posted by Rachel the Gardener at 18:17