Ah, a much-loved job: clipping of the topiary.

Box is definitely my preferred medium for topiary: I find yew is a bit hard going, unless you do it more than the regulation twice a year, and unless you use hedge-trimmers.

Alas, I'm not allowed to use hedge-trimmers, I get overcome with power and go completely mad, re-shaping and reducing drastically. "Scissor-happy" is the name for it. Plus, one slip of the wrist - and power tools are generally pretty heavy - and you can ruin a topiary for months.

So I stick to my old-fashioned hand shears, with my normal secateurs for hard-to-access bits. And no, I don't use topiary shears: I have them, I've used them, but to perfectly honest they make a horrible metallic set-your-teeth-on-edge noise. And as secateurs work perfectly well in either hand, I don't really need them.

What? Yours don't? I bet they do, have you ever tried? The only reason scissors don't work in the left hand (if you are using normal right-handed scissors, of course) is that the pressure is applied wrongly. To use right-handed scissors in the left hand requires a particular way of squeezing them at a slight angle. Impossible to describe, but I could show you... no, I'm not left handed, but I can do most things with both hands....anyway, as secateurs are sprung, they don't have that problem. Go on, get out there and try it!

Most right-handed people don't give their left hand a chance, but it's a useful skill to acquire. It gives the right hand a rest, thus extending the time you can work without hurting yourself, and it's sometimes essential when trying to get a small piece of intricate topiary symmetrical.

So, what was I doing today? Answer, the Long Hedges and the Cloud Hedge. I have already done the Cones, and the Little Balls, (Stop laughing, I can hear you.) I have the Ski-slope Hedge and the Battlements yet to do. 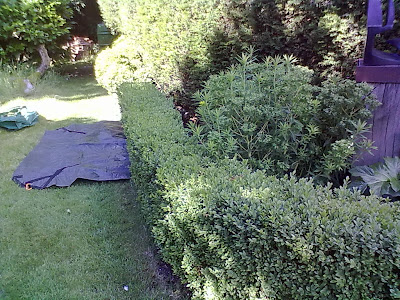 This is the first one, it runs from the Cloud Hedge round to the gate.

The second one - of which I have no photos - runs from the gate round to the summerhouse, and is in two parts, interestingly angled.

Actually, I'll try to remember to take a photo of it next week.

Here I am about to start, note use of plastic sheet to collect the clippings. 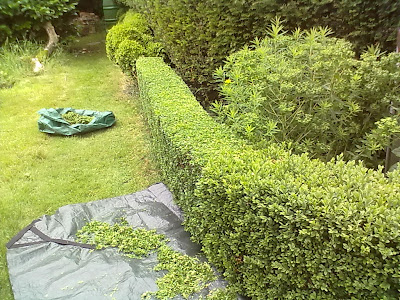 Here we are part way through the job, just to show you how much I have to take off.

And to show you how much neater it looks when done!

Before you ask, I always clip the top face first: then the back, then the front, then I chamfer off the corners.

I know, I know, weird but true: if you try to get precision square corners, it always looks slightly scruffy, but if you chamfer them off, it looks neat. 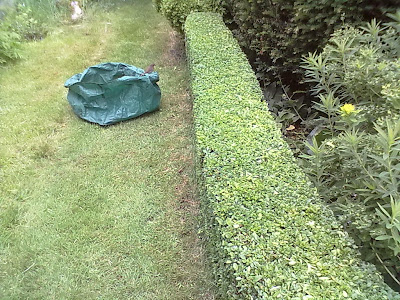 And here's the finished hedge, along with a bag full of clippings. Oddly enough, in this photo it looks sort of rounded, but I assure you it's flat on top and flat on the sides!

The clippings all go on the compost heap, of course: and the hedge gets a sprinkling of balanced feed to encourage it to leaf up again.

I know some people leave the clippings as a mulch, but it's not good practice: the greenery takes nitrogen out of the soil in order to rot. Yes, it gives it back afterwards, but I'd rather let that process take place slowly on the compost heap, and give it back as fully-composted material later in the year.

Right, now onto the Cloud Hedge. 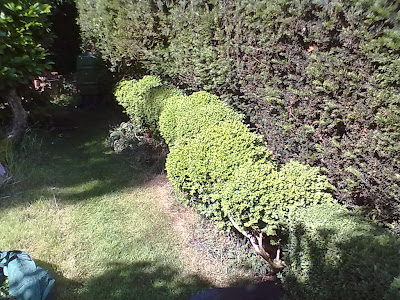 When I first came to this garden, I thought the Cloud Hedge was the lumpiest topiary Snake ever: but I was wrong, it's cloud-pruned. Silly me.

So now I have to continue the tradition.

Cloud pruning is not as difficult as it looks, you just treat each "bubble" as a ball, but let them merge into each other.

The worst part here is the yew hedge getting in the way - it used to be well behind the Cloud Hedge, but over the years the man who prunes it has let it get just a little bit further forward each time.  This is always a problem with hedges, it's hard to stop them gradually widening over the years. Generally, there comes a time when you have to be strong and give them a super big chop, revealing dead brown branches and ruining the look of it for a couple of months. Worth it in the long run, but a hard choice to make. 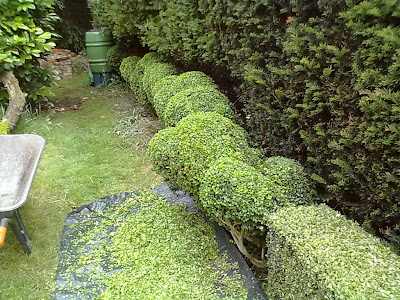 So, back to the Cloud Hedge: here it is done, in the rain, yuck, but at least (she says, looking for the silver lining) it stops the clippings from blowing around.

Ah, now you can see that the Long Hedge is indeed flat on top. There, would I lie to you?

Looking at it from this angle, I might go back to it next week and take a bit off that one that's bulging out leftwards a bit, do you think?
Posted by Rachel the Gardener at 17:30