New Year's Resolutions... and a bit of blushing.

Well, here we are at the start of another New Year - it's January, it's already dark by mid afternoon, but hey, we're past the shortest day, so it's all uphill now, until summer!

Usually you'll find gardening columns etc banging on, at this time of year, about how all gardeners do is sit indoors and drool over seed catalogues.

Nope, instead of lounging around looking at seed catalogues, I've made a sort-of resolution to do a bit more blogging this year.

I say on my website that I have a daily blog which I update weekly, which was sort of a joke... but I can see from my postings list that I've been quite lax in the past few months, and I haven't even averaged one a week.

Why? Is there nothing going on, in the gardening world? Has nothing of note happened? The answer is that I've been concentrating on Other Things, not least of which is the super-exciting Trainee placement - more of that later - and blogging has had to take a bit of a back seat. But all that is over! Yes! I've re-discovered the exclamation mark!!

Actually, I have a somewhat embarrassing confession to make: I received an email from Australia, from a nice lady called Veronica (*waves enthusiastically*) (oh, is it the middle of the night there? Sorry... *waves somewhat more quietly*) who was kind enough to say that this blog is not only “Bloody Bonzer”, *glows with pride* but is apparently,   “Smick”.

Now, not being Australian, I wasn't quite sure about that last one - I have to take her word for it that Smick is a good thing. Over here, it's a bit of an insult;

It's the Irish equivalent of "chav".

Just in case I'd missed something that "the kids" are all saying, I looked it up in Urban Dictionary, and alas: 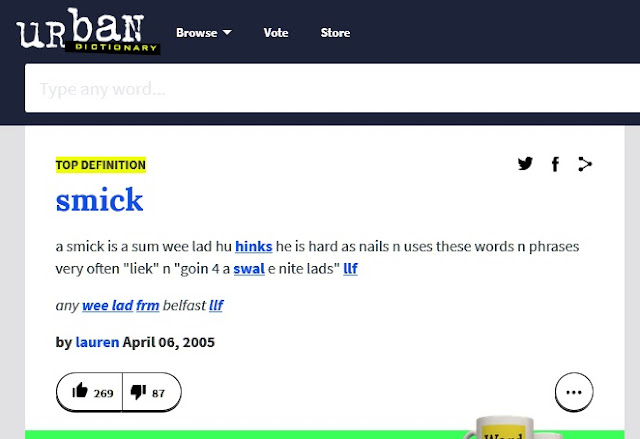 Leaving aside the peculiar vernacular of the person contributing the entry, I think we can agree that in the UK, "smick" is not quite a compliment.

(And would you believe, I typed that as "bloody bonsai" and had to correct myself... not that I have a one-track mind, noooo, not at all...)

So what's the embarrassing part? Well, Veronica was very kind,  in her praise of my skills in written communication (and that's such a good phrase that I shall probably work it into my cv) etc, and I'm kinda blushing a bit.

But I'm easily flattered, as all of my readers - yes, both of you - will know, so the embarrassing bit is that all it takes is one compliment, and here I am, determined to write for another year.

(Veronica, at this point, punches the air and shouts "Yessss!" in an Aussie accent)

So, thank you Veronica, for taking the trouble to email all the way from the place where it never snows: and I hope you continue to enjoy my articles!
Posted by Rachel the Gardener at 17:45