Hoeing: why I don't do it

The humble Hoe - or, Lethal Weapon and Death To Plants, as I call them.

Many of my friends work in what I call "Estate" gardens: you know,  those big houses owned by rich posh people who have a full-time gardener, or a team of gardeners: and most of them live and die by the hoe, by which I mean that they use them all the time.

But I rarely use one.

Well, firstly, what is a hoe? It's a sharpened blade on the end of a long stick, and you work it by pushing it to and fro just below the surface.

The principle is to chop tiny weed seedlings off before they get started: the dead top part dies in the hot, dry sun, and the root below the surface dies with no leaves to support it.

This only really works on hot dry days, on tiny weed seedlings, with no valuable plants nearby and big gaps between the proper plants: perfect for allotments, in fact, where the crops grow in neat rows, or for the afore-mentioned Estate gardens where they tend to have very large clumps of specific plants, with large gaps between them, making it easy to hoe.

In most of my rather smaller gardens, the beds are packed with a mad variety of plants, in various stages of growth,  and there are no straight lines or obvious gaps at all, such that hoeing is far more likely to chop down something precious than to just get the weeds. Furthermore, most of my gardens don't have those convenient tiny annual weed seedlings: oh no, they have horrible things like bindweed and couch grass, to pick just two at random from the list - and these weeds do not respond favourably to having their heads chopped off. In fact, they see it as "pruning" and they respond by growing even more -  oh woe! So no, I don't hoe. Ho ho. *bits tongue and resists urge to make jolly santa joke*

Hoes come in several different styles: mostly it's a flat-ended blade, but there are also Swoes: 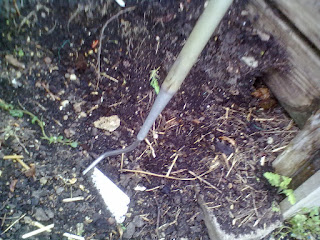 these are shaped rather like golf clubs and are much better for gardens - as opposed to allotments - as the head is much smaller, and you can, to some extent, work around plants, although they really only work if  you have good big clear gaps between each plant.

This one belongs to a Client, and I do use it for the Rose bed, which has no underplanting at all, so it's much quicker to hoe than to hand-weed: not to mention being able to get in amongst the roses without being scratched to death!

They can also be used, during the June Drop season, for playing Swoe-Apples, a game I invented where you use the swoe rather in the manner of a golf club (with overtones of lacrosse, as you have to hold it in front of yourself) to flick fallen apples off the lawn into the beds, where they can rot down and add organic matter to the soil.. Two points for a clean flick: lose one point for an apple that poings backwards. Beats all that bending down to pick them up!

The second reason I don't hoe (apart from in the rose bed, as mentioned) is that you then have to go round and gather up all the dead chopped tops, otherwise they die on the surface and look horrible. Clients would complain.  Again, in an Estate garden you are working on a large-scale: big clumps of plants, to be seen from a distance, often a considerable distance: so it doesn't matter if there are some dead bits adding to the brownness of the soil, in fact they are probably some kind of lightweight mulch, as far as those beds are concerned.

But in my small gardens, the Client can see every inch of every border: it's a far more intimate experience.

Thirdly, there is the dreaded "pan": this is the technical term for a crust of soil which builds up on or near the surface, which prevents water (rain, irrigation) from soaking in and doing some good. Instead, it sits on the top in flat puddles, then when it dries out, it makes the pan even worse. Frequent hoeing without any sort of digging can lead to this problem.

Fourthly, no matter how good you are with a hoe, there are many occasions where you just can't get the hoe right up to the base of the plane: either there are obstacles, such as low-growing branches (I'm thinking of some particular Roses...) or you dare not risk accidentally chopping the stem. So you end up having to get down on  your knees and hand weed anyway!

At this point, one or two people might be shouting "flame gun!" at the screen: these are long wands with a small blowtorch at the end, powered by either a replaceable gas canister, or a refillable paraffin tank. They are promoted as being an organic alternative to chemicals, for paths and drives. Organic! A complicated,  metal-and-plastic device, using either single-use non-recyclable pressurised cans of gas, or using paraffin (also known as Kerosene) which is a highly toxic fossil fuel derivative which is also used as rocket fuel (look it up yourself, it's evil stuff). Not what I call "organic".

Also, flame guns are notoriously ineffective: they scorch off the top growth, but they don't kill the roots at all, and most weeds/unwanted plants just grow back. Furthermore, their eco-footprint is terrible! And (more to the point) they cost a lot of  money in fuel, as those gas cylinders don't last very long. Not to mention the danger of setting fire to the garden, or to yourself.

So what do I do, if I don't hoe? I use the much-loved Daisy Grubber:

... one simple hand-tool, no moving parts, nothing to break down: they cost just a couple of pounds, and each one lasts for many months.  I dig the weeds out by the roots, while loosening the soil as I go, which I call "fluffing up" the beds, and it gives me the opportunity to check everything as I work around it.

And I know that a weed which I have physically removed is NOT going to grow back!

Posted by Rachel the Gardener at 06:57