Edging of beds: how to retrieve an untidy one

Earlier this year I had a fun job: a very large, long border had lost its nice crisp edge, and it was time to restore it.

The edge had been lost for two reasons: firstly and mostly, the planting had grown overlarge and was overhanging the grass in several places, which meant that the grass in those areas had died off.

And secondly, it had been a wee bit neglected for a while, with no-one clipping the edges to keep them straight.

This resulted in a very wobbly edge!

In cases like these, you have to decide whether to restore the original line of the bed,  which would mean removing and/or reducing the plants which were encroaching on the grass line, or whether to re-cut the bed edge slightly further out, in order to accommodate the plants.

Which one to choose? The decision depends on several factors: for instance, is there another bed alongside it or opposite it - if it's one of a pair, they will need to match.

Are there other garden elements nearby, such as gates, hedges etc which need to line up with the edge? Is there enough room for the mower - if the grassy part is a narrow path, you can't remove more of it to accommodate plants if doing so will make it too narrow for the mower.

And, a sensible, practical one - does the edge meander all the way along, or is there just one massive missing bits? There is no need to do a major restructure of the bed edge if there are only one or two badly spoiled patches.

Having taken all these things into consideration, I decided to widen the bed slightly: re-cutting the front edge to allow the plants room to spread. 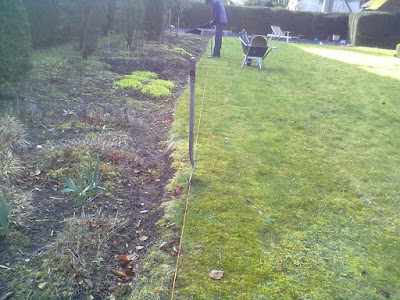 Step one was to stretch out a line, to see how badly the edge was out of line, and to work out where the new edge was going to be.

This involved measuring the depth of the bed, to ensure the new front line wasn't going off at a weird angle, and showed that it wasn't really all that bad: you can see the typical “in and out” wavy edge. where in some places, the grass has been lost, and in other places, it has invaded the bed.

So I put the line in what seemed to be the best midway position, with the minimum of grass to be removed, but enough to leave a good edge. (The photo above shows my Trainee, learning how to use a half-moon edger.)

In this case, there was another part to the problem:  at the back, there was a narrow grassy strip which was now too narrow for the mower to get along. So, having decided where my new line was going to be, I decided to use the lifted turves to build up the edge at the back. This meant doing a bit of preparation to the back edge, removing a few plants which had taken advantage of the lack of mowing to spread out into the grass. It also meant taking the time to weed the strip of soil which would be turfed, and to get it level and at about the right height.

Right! To work! Firstly, cut all the way along the line, using either a half-moon edger (which is the traditional and best tool for this job) or a border spade with a very flat blade (which is what I normally end up doing!). 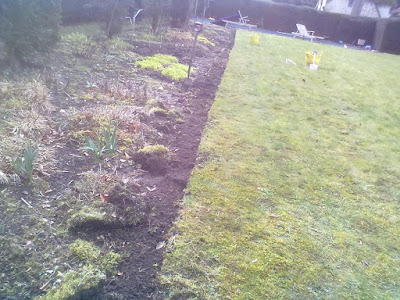 Next, lift the damaged turves and lay them aside.

Here - right - is that step, and if you look closely, you can see the slight wiggle where my Trainee did his bit! ("Bless!")

This does not matter in the least: once the job was finished, I went along the new edge with the edgers and just tidied out that minor digression.

You can see that now, we have a nice clear edge to give those plants room to grow and flop forward, without trespassing on the grass. 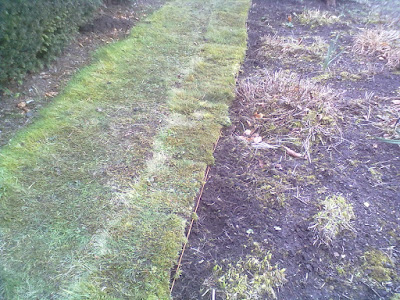 Thirdly, peg out the line at the back of the bed, cart the lifted turves round to the back, and lay them down with the cut edge outwards.

Any gaps were filled in with loose soil, and over time the grass will grow and fill them.

Finally, remove the line again, and stomp down the “new” turves, then water them well. The back edge is a bit wobbly, as it's quite hard to make a perfect edge with what you might call “variable” hand-lifted turf! That doesn't matter: in a few weeks, the new turf will have knitted into place, and can be trimmed into a good straight line.

There you go, job done: and now, some months later, the new front edge looks great, and the plants are all within it - and as for the back edge, you would never know that it had ever been so badly damaged!


Did you enjoy this article? Did you find it useful? Would you like me to answer your own, personal, gardening question? Become a Patron - just click here - and support me! Or use the Donate button for a one-off donation. If just 10% of my visitors gave me a pound a month, I'd be able to spend a lot more time answering all the questions!!
Posted by Rachel the Gardener at 10:33