Elm tree suckers: how and why to remove them.

I wrote a while ago about removing dead Elms: one of the associated problems with Elm trees is the many suckers that they throw up for yards around, and today I was asked to remove a couple of these suckers, from the original dead tree, that were making their way out of the hedgerow (where we don't mind them growing) and into the main meadow (where we are not so keen on them).

In case you don't already know, most of the Elm growing in the UK is Ulmus procera, better known as English Elm or Common Elm and yes, it's the one that gets Dutch Elm Disease. This means that we no longer have huge mature trees of this species: instead we have hedgerows full of healthy young trees, but as soon as they reach a certain point, they die.

Opinion is split as to how, exactly, they die: some books say that the trees can resist the infection for about 15-20 years: others say that the infection enters the trees via small beetles carrying the sticky spores on their backs, and that these beetles are attracted to the flowers, so until a tree reaches sufficient maturity to flower, it won't be susceptible, but as soon as it does, the insects which bear the disease find it, infect it, then it is only a matter of time before they die. Either way, you will hardly ever find an Elm tree that is more that about 20' tall.

The good news is that Elms send up suckers with great vigour, so even if the bigger trees die, there will still be others to replace them. Which is fine in hedgerows, less good in gardens, and no use at all if you wanted to have a specimen tree. However, in our meadow, we are happy to have a thicket of Elm suckers around the edge - but when they start trespassing into the meadow, my Client looks at them with furrowed brow, and instructs me to get out there and get rid of them.

On this occasion there were a handful of slender young saplings to be removed, each of them taller than me, (memo to self: must encourage the Client to go out into the meadow more often so she spots them before they get this big) and about thick enough that I couldn't get my finger and thumb all the way round the stem at the base.

Now, the cunning part about removing tree suckers is that you don't have to dig a whopping great hole: they spread by horizontal roots, which run just under the roots of the grass, and send up new growth wherever the fancy takes them: you tend to get them in straight lines. They might look like random growth at first, but in this case what appeared to be half a dozen saplings turned out to be just two roots, one with four new trees on it, one with two.

All you have to do is work out which way the root is running, get a fork or spade underneath it and lever it up. 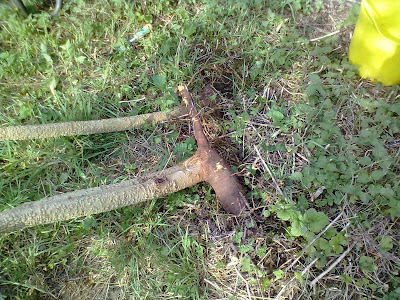 Here's one I did earlier - as you can see, there is the one good strong sapling, and a couple of inches further along the root, a second one, much spindlier.

You can also see that the root is continuing to head off into the meadow.

Note also the almost total lack of "roots" in the sense of a mat of small feeder roots: these saplings are taking all their nourishment from the original rootstock, and if severed, would just die.

Knowing which way the root was running, I was able to heave up the root for several yards back towards the hedgerow, using a combination of slitting the turf along its line, and levering up with the spade.

By the time I was "off" the meadow proper, the root had become about twice as thick as it is in this photo, and was putting up a lot of resistance, so I simply cut it off as short as I could, and trod down the slit in the grass.

There is every chance that it will throw up a new sucker from the freshly cut end, of course: but that's ok because it is now back into the line of the hedge, and furthermore, small suckers can easily be mown off, or better still, ripped off from the root, if they are spotted in time.

As a piece of general advice for removing suckers, if you "cut" they will tend to re-sprout, but if you "tear" or "rip", then they will generally lose interest. This is of more importance with grafted trees and roses, of course, but I mention it in case you catch your Elm suckers at a much earlier stage. If they are only tiny tiddlers, a few inches high, then it is better to scoop aside the soil so that you can see the root, then take firm hold of the sucker as close to the root as possible, and rip it off.

And that, dear readers, is the reason I didn't simply chop off the root where it was - if I had done so, it would probably have simply sent up a whole bunch of new suckers right at the cut end: right where I don't want them!

Posted by Rachel the Gardener at 17:14