Are your strawberry beds starting to look tatty? You've picked several bowlfuls of lovely strawberries over the last few weeks, but now the bed is full of dead brown leaves and looks terrible.. but fear not, it's perfectly normal. 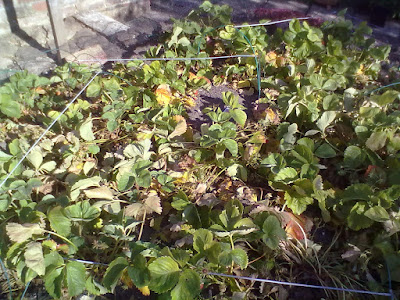 Here is the "before" photo of the strawberry bed of a Client: the crop has been really good, but it's clearly time for a bit of tidying up.

All I do is - having removed the protective net - approach each plant individually, and cut off all the dead leaves,  and all the fruiting stalks which have been stripped of fruit.

This included any dead-looking fruits, or any tiny knobbly ones that are not going to come to anything.

I leave any new leaves that are just starting, but I take off any that are more than, say, one third brown. 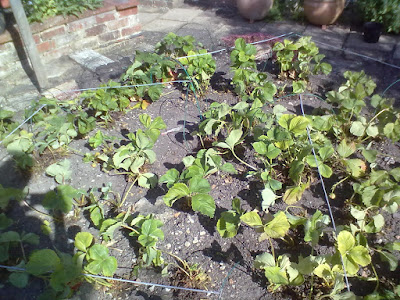 Here is the result: all the dead stuff has been removed, allowing air and light to get to the remaining plants.

Quite a difference, isn't there?

Why do I do this?

Apart from making it look better - which is probably justification enough, come to think of it *laughs* - removing dead material has three purposes: firstly, decaying plant matter attracts nature's dustbinmen, the snails and slugs, and we don't want to encourage them in the strawberry patch.

Secondly, an  understory of dead foliage provides the perfect hiding place for said slugs and snails, while they feast themselves.

Thirdly, allowing air to circulate reduces the risk of powdery mildew and other "rotting" diseases.

Actually, there is a fourth reason: a good hard pruning like this stimulates the plants into sending out a new flush of leaves, which look good: a new flush of fruits, which is good for the obvious reason; and it also promotes the formation of runners, so we can select a few of them, peg them down and allow them to develop in order to make some replacement plants for the end of the season.

It is good practice to replace strawberry plants after four or five years: they don't go on for ever, and after a few years they become likely to contract various viruses. But if you like the taste of the ones that you already have, you can allow a few of them to put out runners, which are "clones" of the original plants. So you know they will taste the same!  These new plants can then be used to replace the oldest ones.

I do this by starting at one side of the bed, and replacing a quarter of the plants each year. This also gives me the chance to get the plants back into nice neat rows! Not that I'm obsessive about neatness in the garden, it's just that it's easier to step into the bed for weeding, and for picking, if there is room to put your feet down without squashing a plant, and this is obviously easier if they are in rows.

Having replaced the netting, I then got out the hosepipe and gave the whole bed a good drenching, which it needed after the hot weather we'd been having - although to be honest with you, I would still have watered the bed, even if it had rained the day before, as a good watering helps the plant to get that new flush of leaves under way.

So there you have it: how to clear up your strawberries. And best of all, in a couple of weeks, there should be a whole new crop of fruit to eat!
Posted by Rachel the Gardener at 08:45