Honestly, those Victorians... they brought Giant Hogweed into the country and planted it in their stately home gardens, thinking it was "lovely".

But it looks just like Cow Parsley only worse - the foliage is hideously coarse, it's a dull greyish green, with massive rough leaves, each can be 3-4' across, and look very much like normal Hogweed. At least Cow Parsley has delicate, bright green foliage.

They wanted it because it was huge - it really can get to more than 15' high - and I suppose it coincided with their fascination with Dinosaurs and all things massive.

The legacy, however, is that the wretched stuff is now loose in the UK, growing unchecked in the wild, particularly alongside rivers or canals, or in damp shady woodland.

And the danger is that the plant's sap - the juices that leak from the leaves and stems if they are broken - are very nasty indeed. They are not poisonous, but when they contact your skin, they leave it super-sensitive to sunlight. So the next time you go out in the sun, the area of skin which was touched by the sap will flare up into blisters and will hurt like hell. Continued exposure to sun will lead to burns, which in turn will leave scarring and long-lasting damage.

This sensitivity can last for months, even years.

It mostly occurs when workers are strimming, without proper protective clothing: the action of  a strimmer releases the sap and sprays it far and wide, and if you are wearing shorts and a tee-shirt, with no face visor, the results can be quite horrible. One of my Canal Club colleagues did exactly this: he was strimming an area in Abingdon, with his shirt sleeves rolled up, and the next day he was down to A&E with nasty burns on  his arms. Thankfully, he was wearing proper head and face protection, and gloves, otherwise it could have been even worse.

The BBC website was publicising this problem yesterday, two lads from Bolton were playing in a patch of the plants, and woke up next day looking like this: 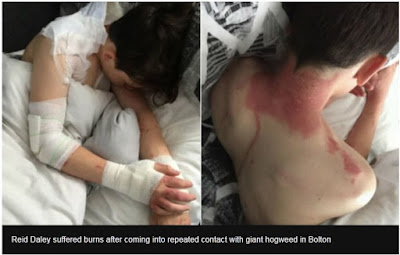 The report says they were "touching" the plants, and the photo's caption says "repeated contact".

I had understood that it was only the sap that could do this, and that you would have to break the foliage to release the sap: we don't know exactly what the lads did, but I suspect they were dodging through and round the stems, so it's possible that they had broken off some of the leaves as they passed.

Certainly the right-hand picture seems to indicate that contact occurred where the bare neck pokes out of the tee-shirt or top, and that some sap has dribbled down the lad's back, with additional splodges over the shoulders.

Poor little lads! They are in for a time of it, and I bet they will be saying to their parents "See! If we'd stayed indoors playing computer games we would have been fine, but oh no, get some fresh air, you said, get some outdoor exercise, you said, go and play in the park like we did when we were kids, you said..."

The parent was reported as saying "I couldn't believe we didn't know about it; most people don't know about it. It's just a weed. You are not expecting it to cause severe damage."

This is absolutely true: I have written in the past about finding Hemlock growing locally, and the fact that children are no longer taught about poisonous plants.

Perhaps it is time that Health & Safety rules were revised to allow schools to do nature outings again.

In the meantime, you can help yourself by going onto Google and searching for Giant Hogweed - the proper name is Heracleum mantegazzianum (mnemonic: Hercules Moto-Guzzi) and learning what it looks like. 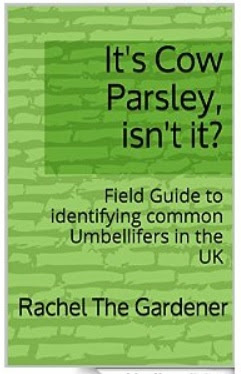 Then download a copy of my Field Guide to Umbellifers, catchily titled "It's Cow Parsley, isn't it?" and get out there and identify all the "stuff that looks like cow parsley" in your local area.

It's available to download FREE if you have Kindle Unlimited, otherwise just £3, and think what it could save you in pain, blisters, scars, and having to keep out of the sun for the next few years...

Posted by Rachel the Gardener at 08:19