There is a new housing development near to where I live, and as part of the "sweetening" to local councillors, the builders - Bovis - have allocated an area for a "wildlife reserve". I put that in quotes, as it comprises a small wedge of land on the edge of the estate, with a series of deep holes, now filling with water, to provide ponds.

No-one seems to have thought about how the ponds are going to be topped up and kept fresh, and I don't think rainwater alone will be enough. At present they are being filled by overflow from a natural spring some way uphill which, this year, is flowing along the path and down into the "reserve" and is doing a cracking job of filling the ponds. However, this spring is not a regular one: all the locals to whom I have talked agree that we have never seen it flowing so much, and flooding over the path so badly.

Presumably the creation of wildlife ponds was in response to finding Great Crested Newts on the fields on which they planned to build: I know they are there, as I get them in my front garden in wintertime, and I live only about 100 yards uphill of the building site.

All that notwithstanding, it was the planting of the native hedging that really got me going.

Here it is: the photo is taken through the metal grid of the security fence. 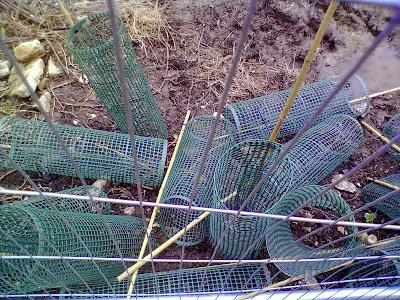 Like someone has tipped out a barrow-load of tree protectors?

That's what I thought, until I looked more closely.

Unbelievably, there are tree saplings inside each one. Half of them have fallen over, as you can see, so the sapling has been bent or snapped off. 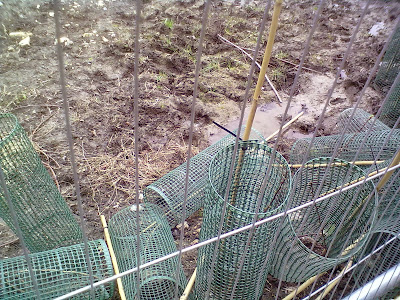 It appears that whatever useless employee planted them did not bother to push the canes into the ground at all.

The only good thing to say that at least it was not done by the local council, so it's not our tax money going to waste!

Unfortunately the site  is heavily fenced, so I can't get over there to sort them out 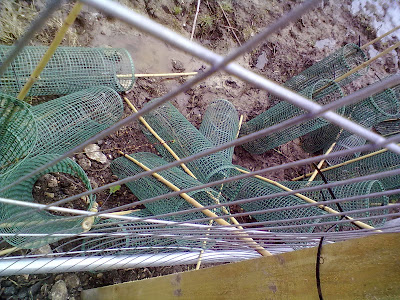