Big excitement for me earlier this year: one of my Clients has a row of fairly substantial box plants along the side of their drive, which were bought to "hide" the stone wall.

Personally I think it's a rather lovely wall, but apparently it belongs to next door, who never do anything to their garden so the wall is falling down in places, and has a lot of weeds growing in the cracks, not to mention the brambles etc that lean menacingly over to our side. So I can see the point in covering it.

Anyway, when I suggested that it was time for a trim, assuming that they were there to form a hedge, my Client said that she didn't want a boring old hedge, she wanted them to be individual plants.

She looked at me blankly.

After some discussion, it became apparent that she couldn't quite picture how they would look, so I did the first four into pointy tops, and the next four into rounded balls - actually more eggs, than balls, as they were planted a little bit close together. 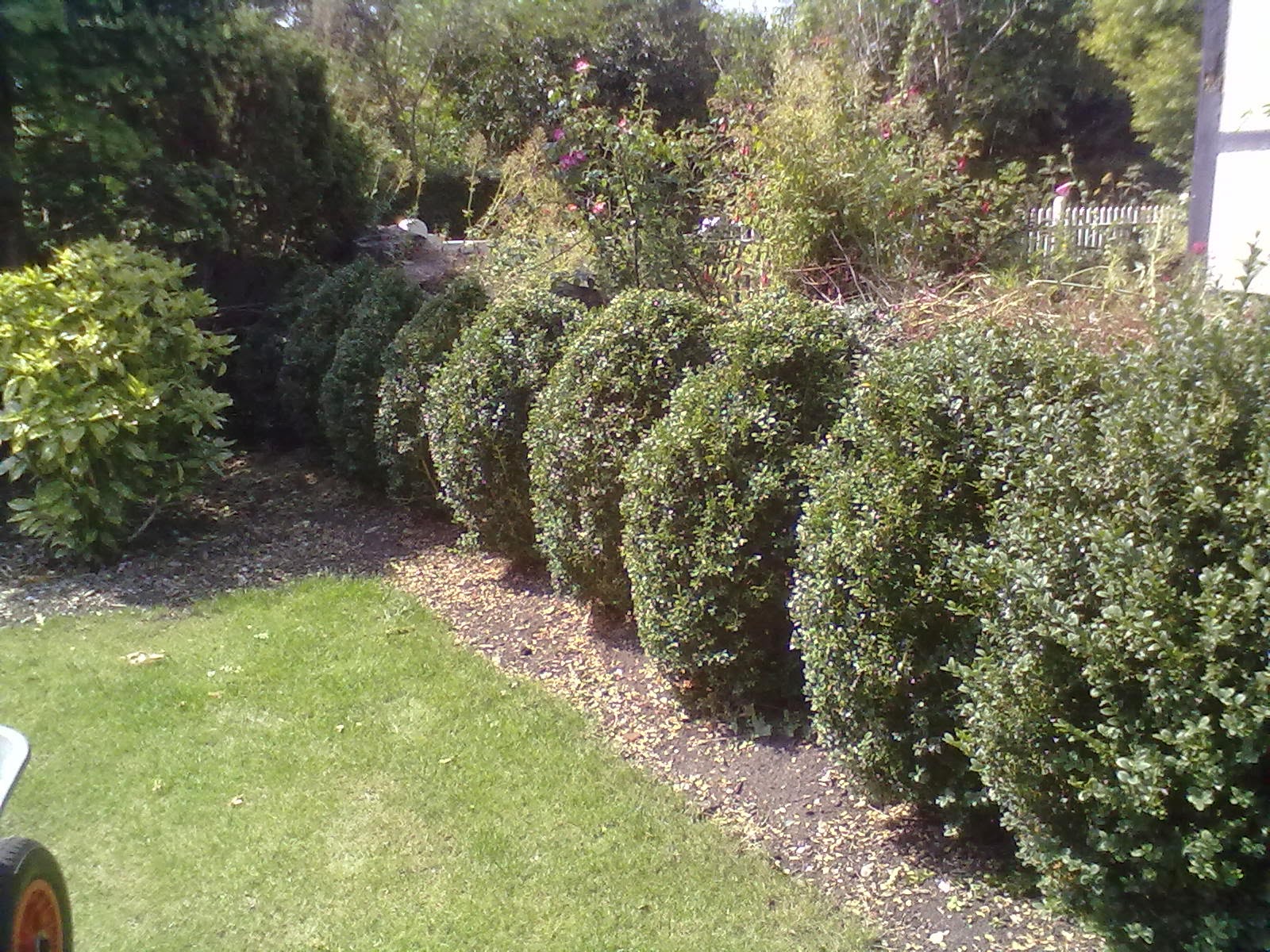 Here is the first stage - the four on the far left, currently in the shadow, are pointed, and the next four are eggies. The one on the far right of this photo is an original unclipped one, to give an idea of the original size. 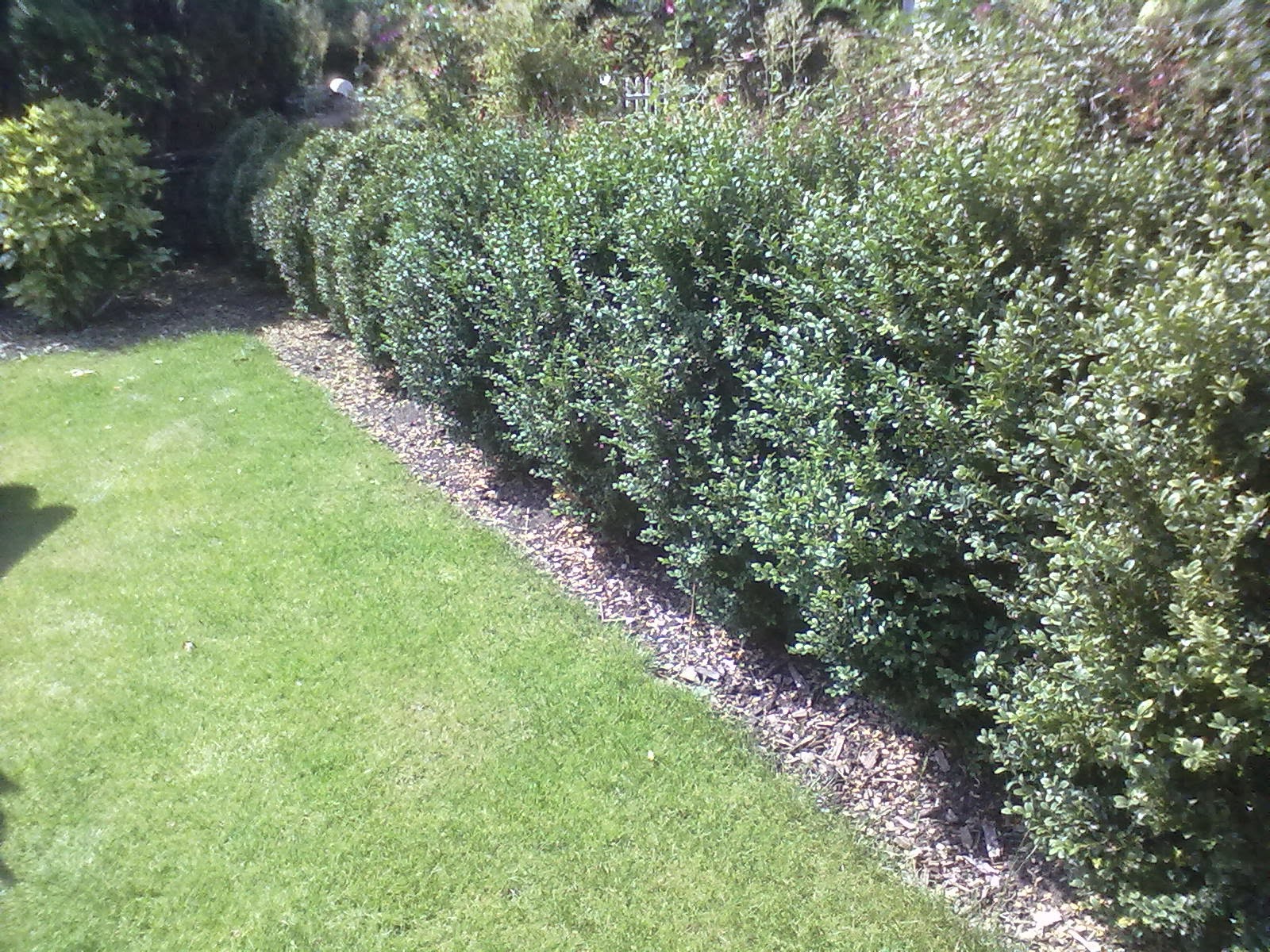 Here's a view along the run, from further back, showing the neat clipped ones in comparison to the unclipped ones. As you can see, I haven't reduced them in size very much, as they are required to hide that wall, so I have just aimed to make a slight separation of a couple of inches between each one.

After a week or two, the decision was reached: it was to be Pointy Tops, please. 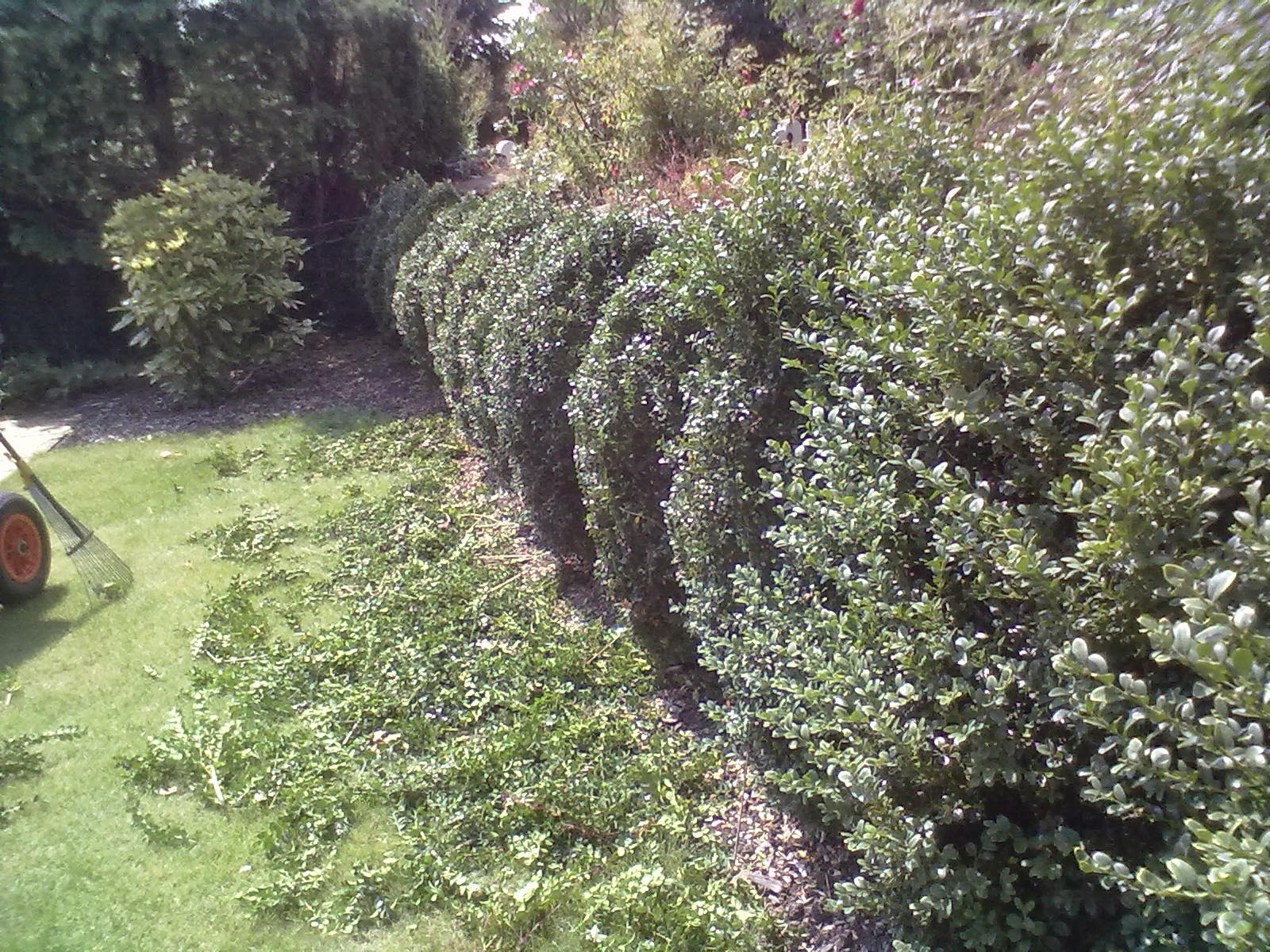 The first job was therefore to put points on the eggie-shaped ones: check! - then to carry on along the run, clipping them into Pointy Tops as I went. 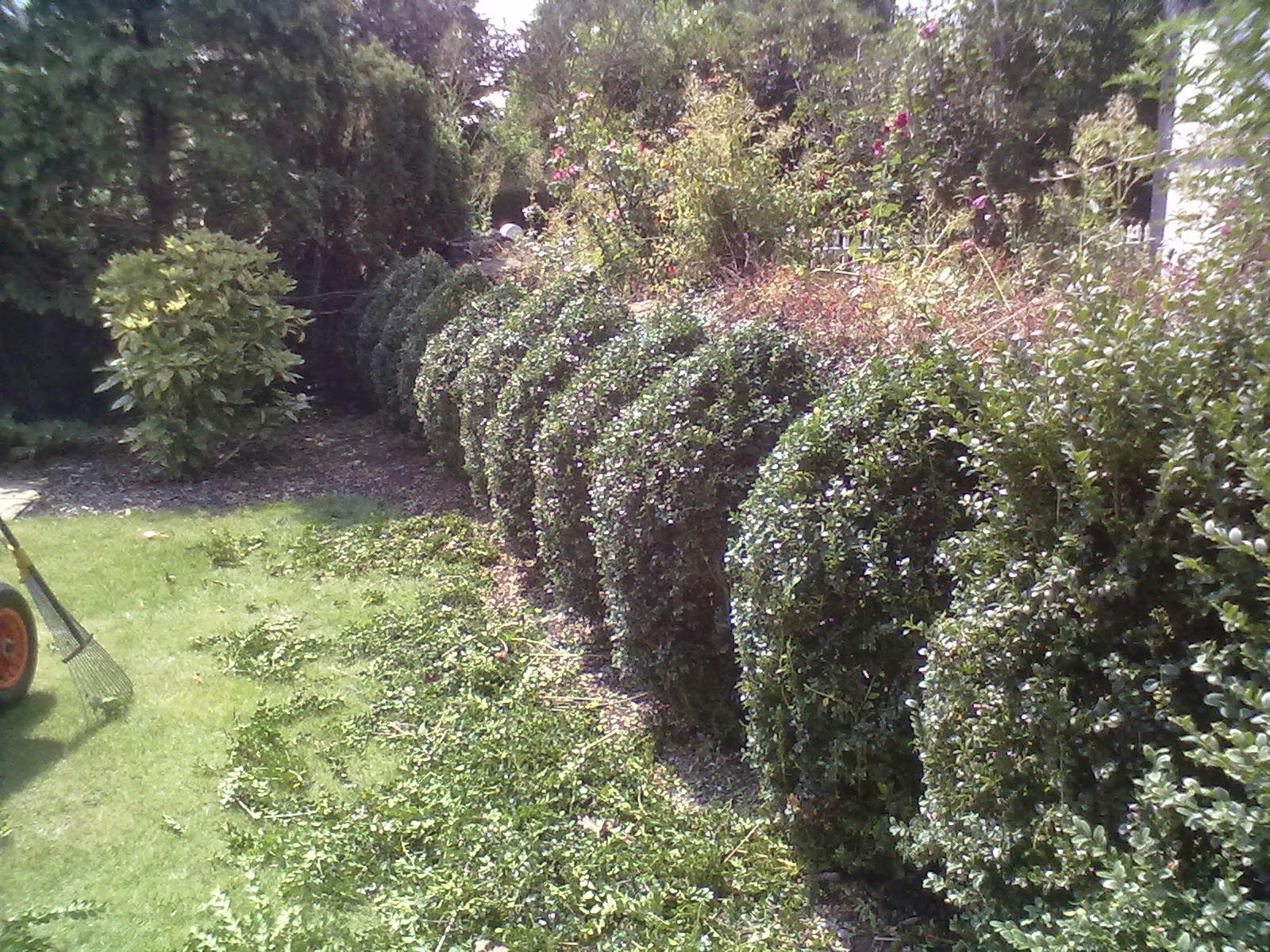 Here I am working along the row - oh hang on, I can see one that's taller than the rest, and one that is bulging out too much. 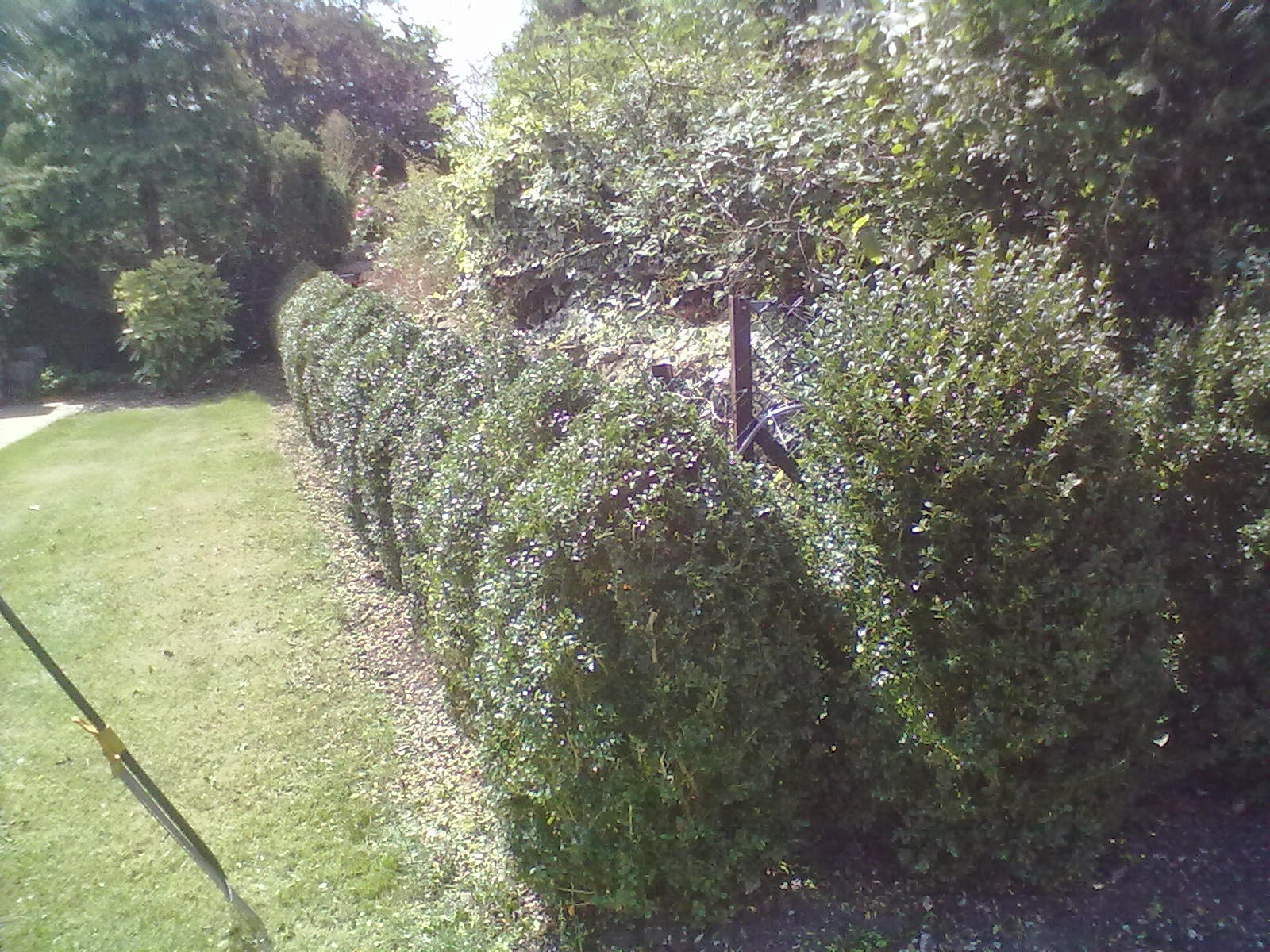 There we go, I am at the end of the row, and they are more or less in line.

Not bad, considering I have not used one single piece of string, card, cane, or any other device: this is all done by eye.

It's not possible to get them geometrically precise the first time they are cut, as some of the individual plants lack branches in the right places, so there are some "voids" here and there.

At this stage, I don't worry too much about voids, and I explain carefully to the Client that this is a natural process, and that they will fill in over the next few times they are trimmed. 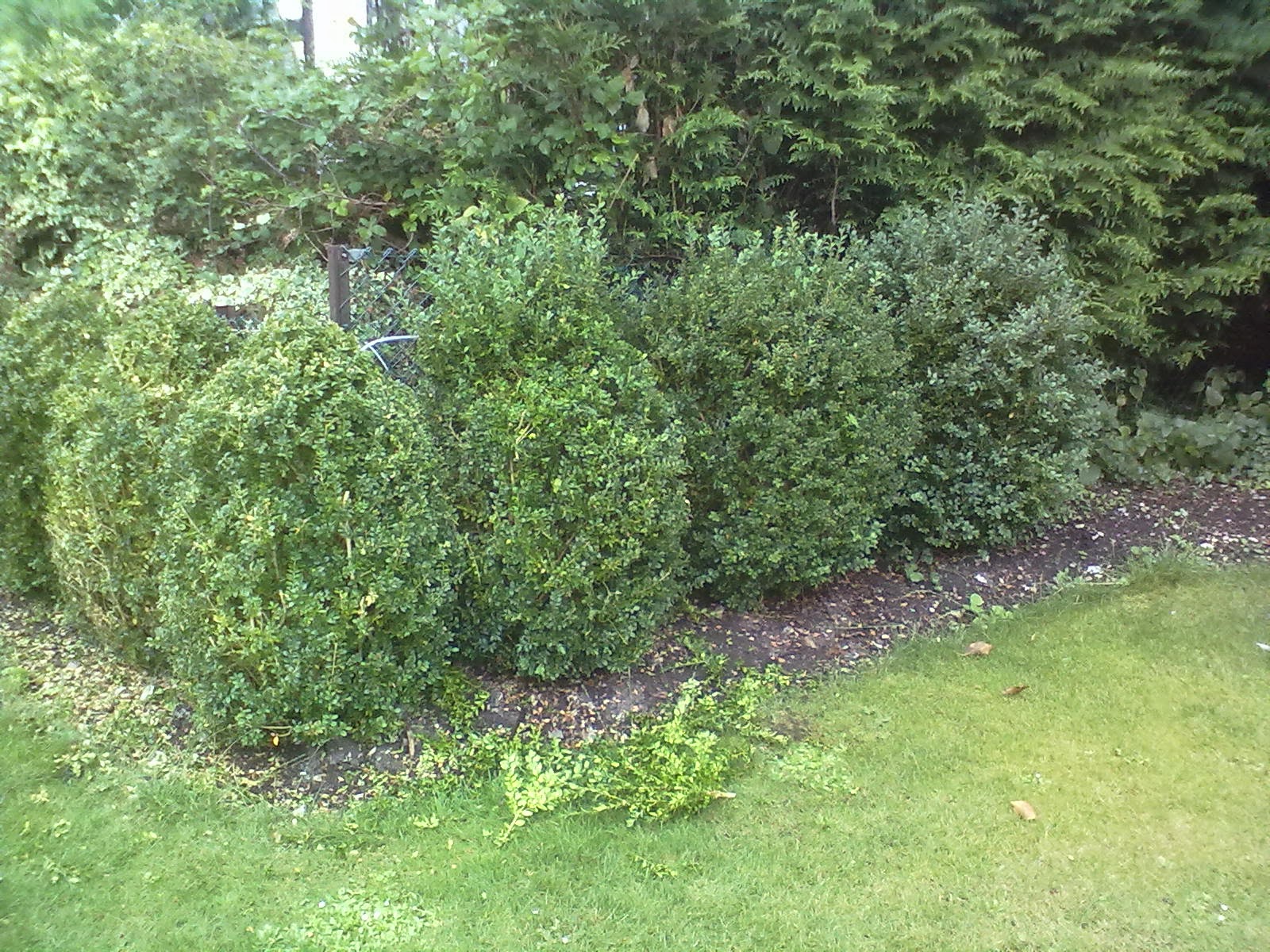 A week later, back again, time to do the final three.

No, it didn't take me all morning to do them last time, but I have the rest of the garden to work on as well, you know! In fact, I think I did the main length over two weeks.

Here I have just started on the first of the final three, but as you can see, when they are growing this close together, you can't do one at a time, you have to do a rough clip of the neighbour in order to make room for the shears. 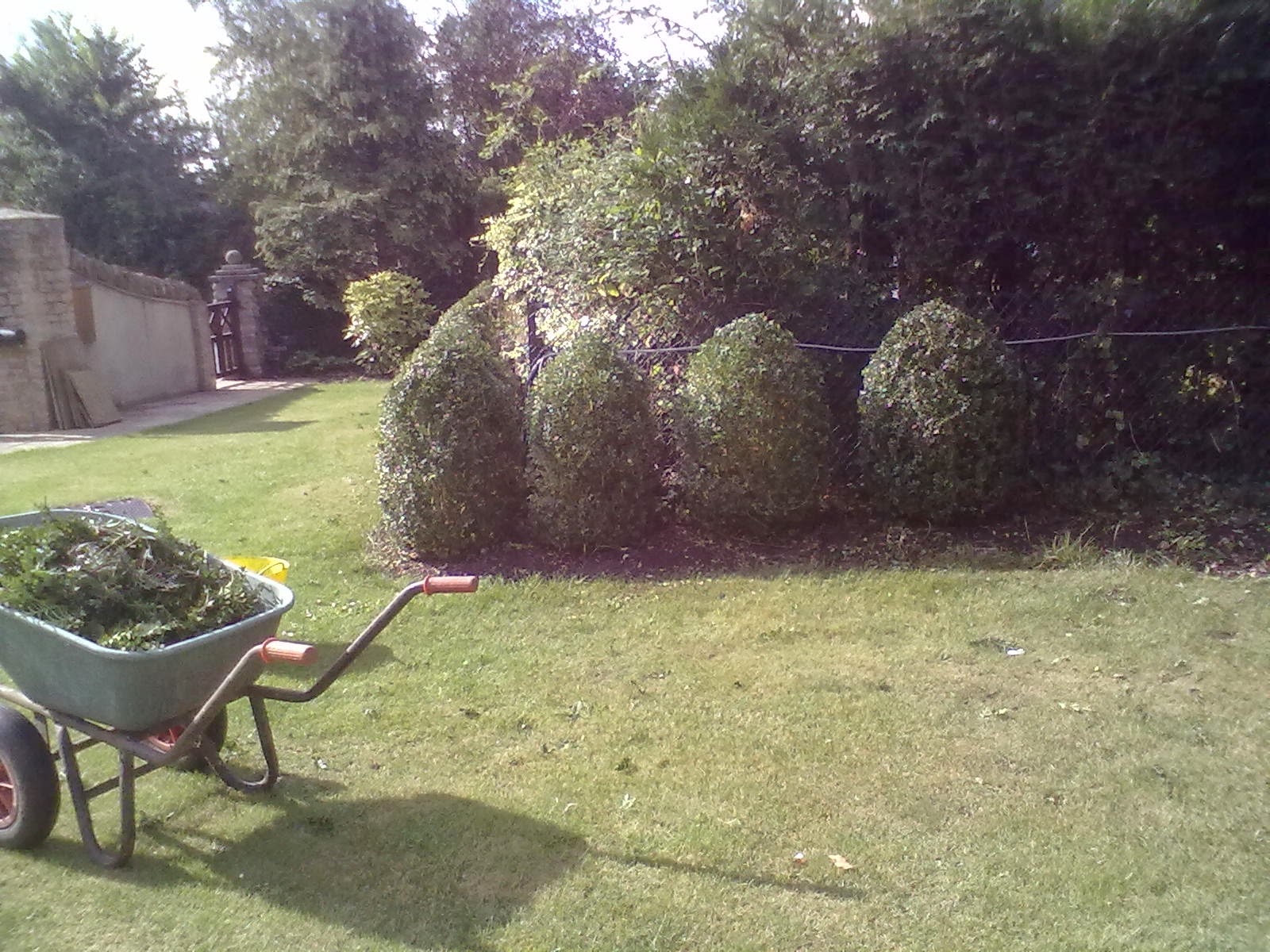 There we go, all three clipped to shape, and the bits have been neatly raked up and are in the wheelbarrow ready for disposal. 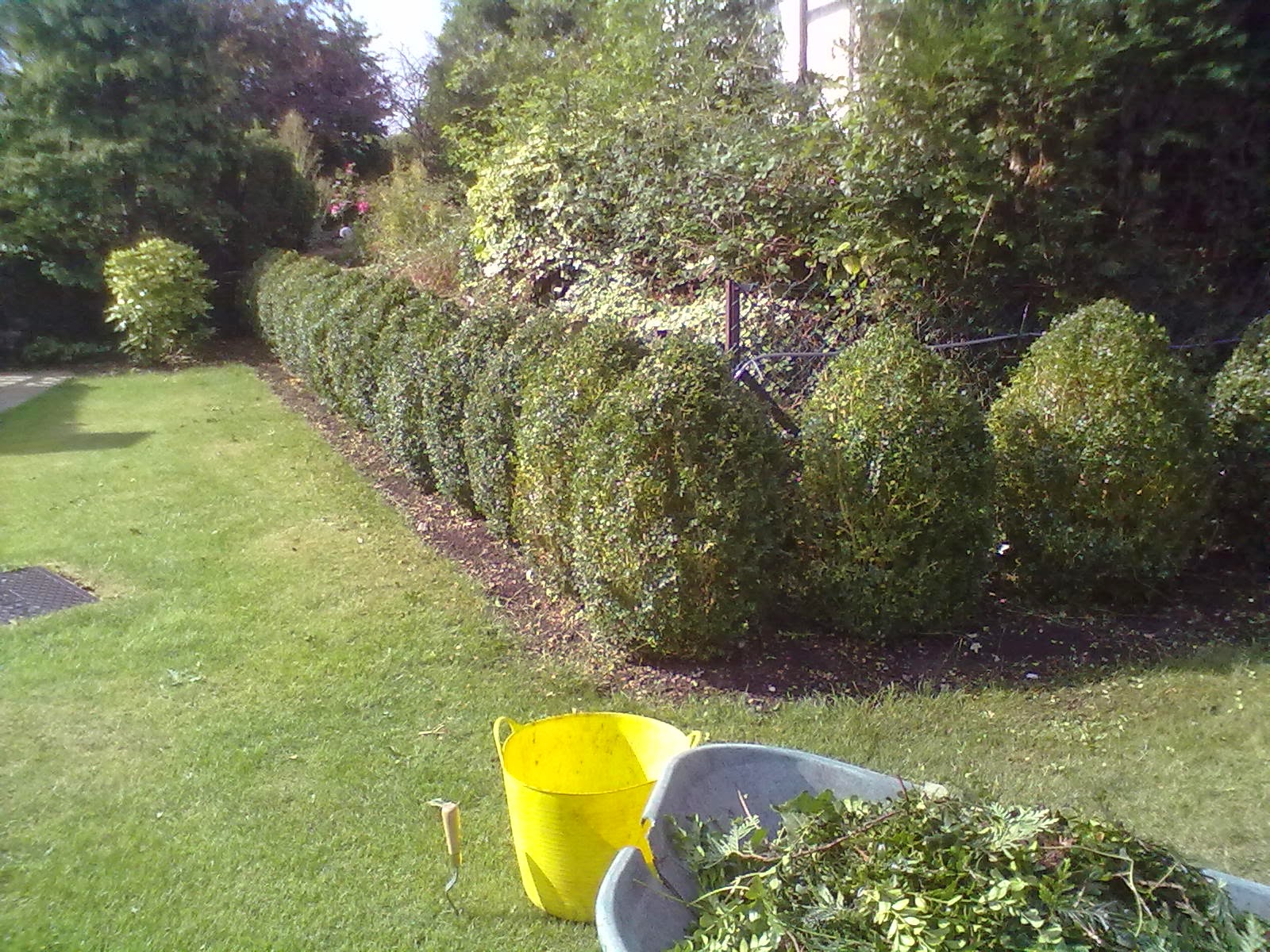 Here's the completed run, as seen from the drive. 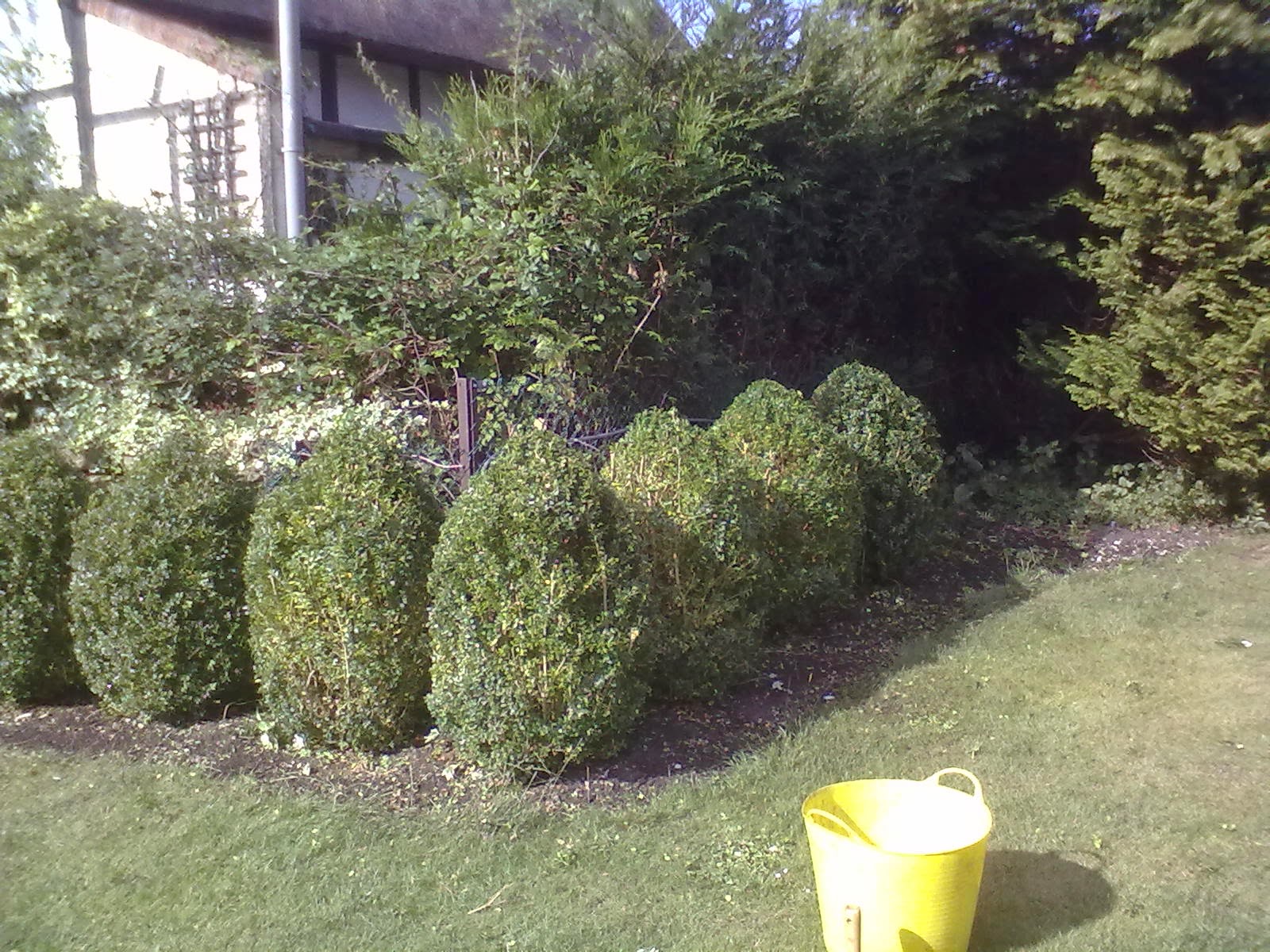 Do feel free to admire the neat shapes and the almost-precise duplication of angles. 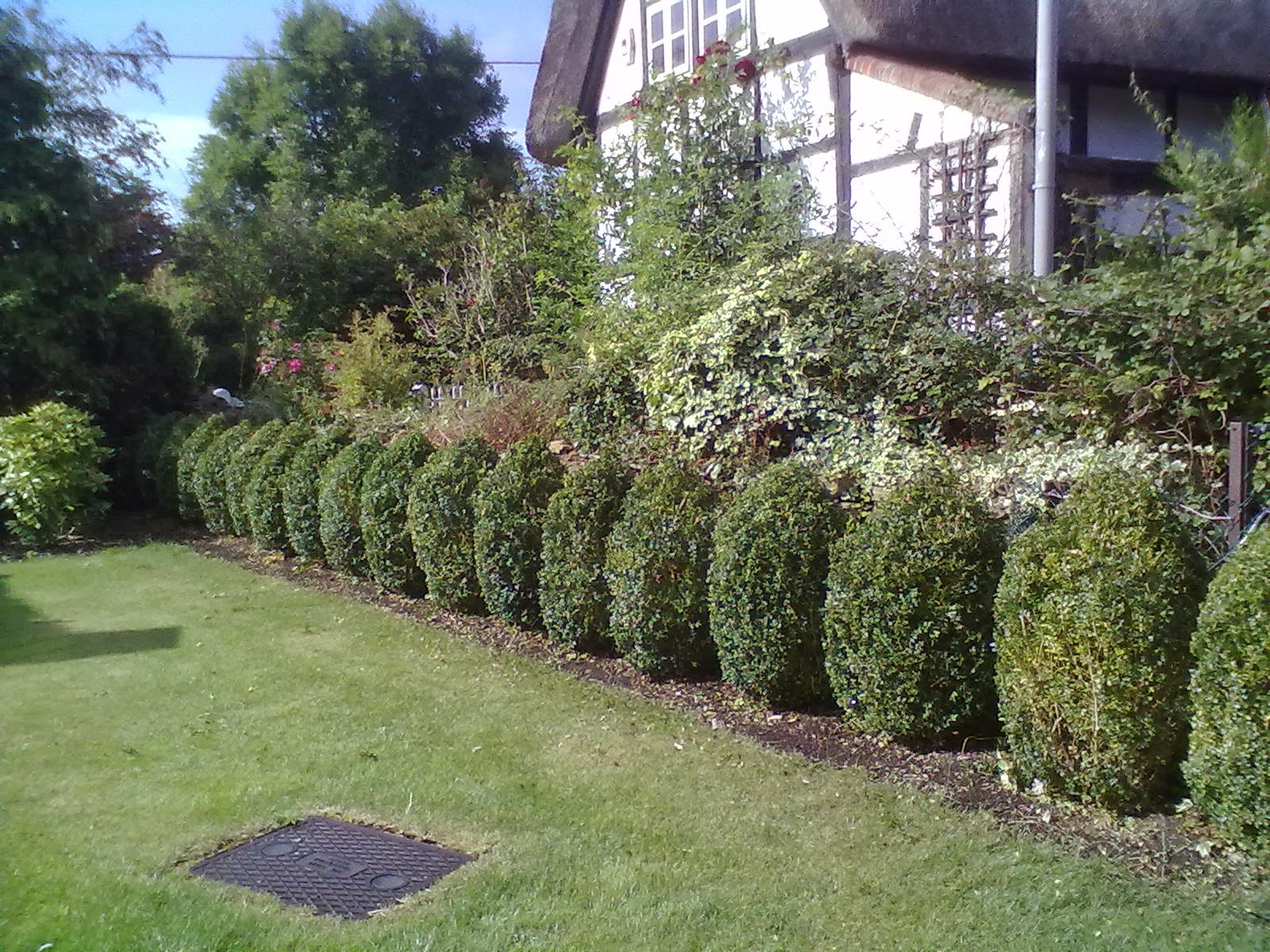 Is it my imagination, or are they getting less Pointy as we go from left to right?

As I said, I don't get too hung-up on perfection on a first clip for several reasons: the plants need time to adjust to their new shape,  it takes a while for all the cut off bits to fall out, and sometimes they just don't have branches in the right places. This usually sorts itself out over a few clips, and certainly I am very pleased with this work.

So was the Client, luckily!

Also, there is something in our brains that find a "wrongness" about plants that are too perfectly aligned.  That's why you can nearly always spot artificial flowers or plastic topiary - they are just too perfect to be true. The ground is rarely perfectly level anyway, and there is always a balance to be found between geometric "level" and being "level" to the eye.  I have seen hedges cut with spirit levels and templates which then had to be recut by hand: it's no good getting the top of the hedge perfectly level if, for example, an old wall which is visible behind it, is not level.

This was done back at the end of July, so they were all putting on new growth within a couple of weeks. I gave them all a good fistful of chicken manure each, and I ran the hosepipe down there and gave each one a good drenching - this was on the day of the final clipping, to give them a head start.

Sometime people ask if it is better, or easier, to do it all in one go, or to work in instalments.

The easy answer is that it doesn't matter: both ways have advantages and disadvantages. I find that when you are doing repeated identical shapes, it can be easier to do them all at the same time, as you get into a sort of routine of getting them all at the same height. But it can get very tiring to repeat the same motions, so in many ways it's better to take a break.

My "trick of the trade" if  you like to call it that, is that when I return to a run of topiary that is part-done, I always start by standing over a completed one and making a few dry-run passes with the shears, to get the "feel" of the shape again. I then move over to an un-cut one and start clipping.

As mentioned, both myself and the Client are very happy with the way this project turned out, and I am looking forward to next year, when I will be clipping them regularly and when they should take on a really good, solid, shape.
Posted by Rachel the Gardener at 15:04