Ivy - another reason to hate it!

OK, I'll come right out and say it, I hate ivy in nearly all its permutations.

This is my professional opinion, based on how many times I have been asked to remove encroaching or swamping ivy, and how many hours I have spent wrestling with the damned stuff.

I accept that there are some (few) situations where an attractive variegated ivy can be of use, or maybe where a decorative small-leaved slow-growing ivy might fill a niche in a garden, but the common dark green stuff - nope, no sympathy, I can't stand it.

Last weekend I was working on my local canal, clearing the footpath of some overgrown trees. No, not by myself, I belong to the Wilts and Berks Canal Trust, a group of volunteers who rescue and maintain the old canal in the sure and certain hope that one day it will again have boats on it. Not as unlikely as it might seem, the Kennet & Avon was once derelict and virtually non-existent, and now it is a thriving waterway. Our turn will come.

Anyway, there we were, chopping up some small trees that had fallen across the towpath. One in particular was a massive thing, at least six foot across, and covered in ivy, and we were all quite surprised that such a massive tree should have simply fallen over.

When we started to cut up the tree into lengths, we realised that it was not a big tree at all, it was a small tree with a dense covering of ivy, growing out at least two feet all around the original trunk.

If you've ever tried to cut up an ivy-covered log, you'll know that it's almost impossible, as the loose ivy gets in the way of the blade, and prevents the teeth getting a grip. So you have to remove the ivy before you can even start to saw at it.

Seven of us spent half an hour or more using loppers, secateurs, a spade, and several bowsaws to get the ivy cleared from the trunk in five or six places, so that we could saw through it and move the sections away from the path.

Here is the cross-section: 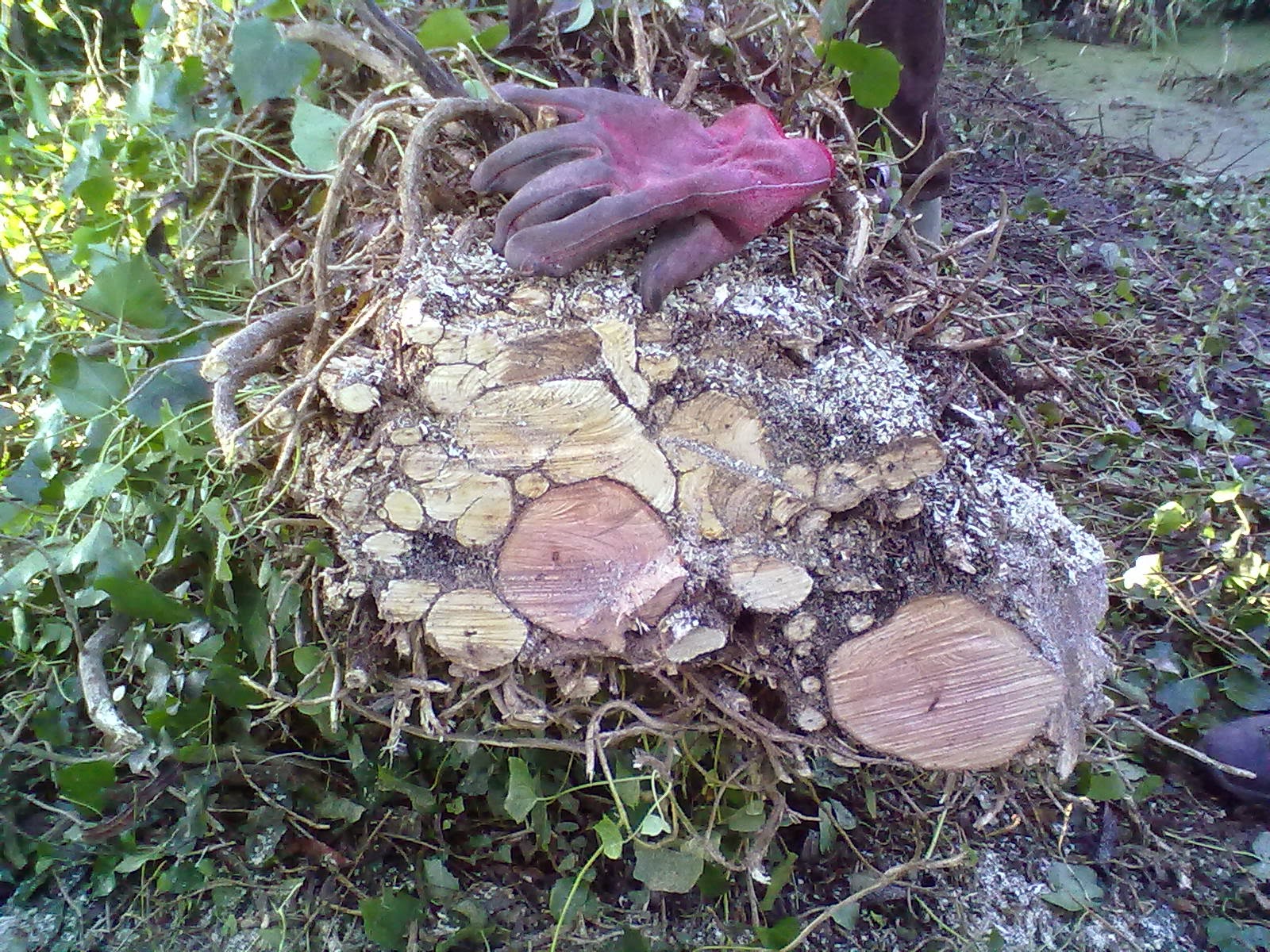 That's my glove on top, to give you an idea of scale.

Can you see that two of the cut sections are kind of pink, while the others are white?

Those two pink ones are the actual trunks of the tree.

All the rest is ivy.

And you can see that there is far more ivy than tree! No wonder it fell over! The weight of ivy stems was more than double the weight of the tree, not to mention the outer coat of loose branches and leaves, which probably doubled the weight again. Far more than the roots could handle, and whop! over it went.

And that, dear reader, is another perfectly valid reason why I hate ivy!

Posted by Rachel the Gardener at 09:13