This was a new experience for me: I belong to my local canal restoration group, and our branch's chairman asked me if I would lead a Guided Botany Walk along a short section, as part of our town's Summer Festival.

Naturally I said "yes", as I am always happy to talk about plants, although I was a bit apprehensive that there wasn't much that was botanically interesting along the chosen stretch - mostly it's just an awful lot of Willow with a few other trees and a mixed hedgerow, and the banks are mostly sedge, cow parsley, nettles and burdock: what you might call "weeds" rather than "wildflowers".

Luckily, the weather was kind, so we set out on a nice Sunday morning,  with just over a dozen people turning up to join in, which was not bad, I thought.

So what does a guided walk actually entail?

Well, we met in the small car park at East Challow, and walked down beside the new housing development to where the towpath started. Before we started the walk, I did the Health and Safety talk, to the usual heckling (I get this from my Botany crew as well) then I gave a short talk about canals: how they were the motorways of their time, and how they revolutionised the transportation of goods in two ways.

In case you are interested, the first was the transportation of delicate goods: the only way to move things at that time - and we are talking the early 1800s - was by horse and cart, along roads that were more like the Ridgeway after two dozen four-wheel-drive vehicles have been hammering along it in wet weather, ie with ankle-deep ruts and massive puddles. And carts, in those days, had no suspension at all. Only the toughest of cargoes could survive.

And then there was sheer logistics: a horse can pull about one-and-a-half times its own weight in a two-wheeled cart. Most horses weigh about half to three-quarters of a ton, so one horse could just about manage one ton of cargo. But on water, that same horse can pull a 30-ton barge with ease, for the same amount of feed, the same amount of shoeing, and rather less wear and tear on the horse, as the towpath was designed specifically for them: it was smooth, well-surfaced, clear of obstructions, and almost entirely flat.

And the ride was silky smooth.... eggshell-thin pottery could be transported undamaged - at the time, it was miraculous! So nothing stood in the way of building the canals, least of all the concept of eco-restoration or landscaping, concepts which simply did not exist at that time.

There was no thought for tree-planting, for landscaping, for screening them, for making them visually pleasing: the whole idea was to dig the 'ole, puddle the clay, get the water in, and get the boats moving. Sometimes a quick fence would be strung alongside, to stop the cattle damaging the banks while trying to drink, sometimes the canal companies would plant up the hedgerows, with what we now call a "native mix" of hawthorn, blackthorn, elder, holly, and dogwood: a mixture of thorny stock-proof plants, and useful edible ones.

There are suggestions that a lot of the crab-apples which we see on towpaths were planted by boaters, so that they would have a source of food while travelling: and it is entirely possible that hazel was planted deliberately, to be coppiced to provide firewood and timber for mending baskets and so on.

Over the years, these hedgerows extended and thickened, but they were not maintained in the modern sense: the farmers kept their land clear, and the canal operators kept the towpath clear, leaving just a narrow strip of no-mans-land for opportunists such as brambles, dog rose, and the various "weeds" that you would expect to find.

Having done the introduction, we set off along the towpath, with frequent stops to point out things of interest, to discuss the plants and their uses, and to answer questions.

So what did we find?

Rather more than you would have thought - for a start, no less than twenty-two types of tree!

I'll put a full list at the bottom, and in the meantime I'll spare you the Latin names: as well as the "usual suspects" already mentioned, we had predictably large numbers of Crack Willow which is the commonest willow along our stretch: lots of Sycamore and Norway Maple (which a lot people get confused), and some oddments such as Laurel, Poplar, Aspen, Elm - only small ones, these days - the odd Oak, and even Walnut.

Items of interest included a deliberate mislead on my part - many people know that Hemlock is an Umbellifer, ie it's white and frothy like Cow Parsley, it's very poisonous, and it has purple spots up the stem.

After discussing this description, I pointed to an Umbellifer, with white frothy flowers on top, and purple spots on the stems. Screams of dismay! But no, I said calmly, this is not Hemlock. If you look closely at the stem, is it smooth, or is it hairy? 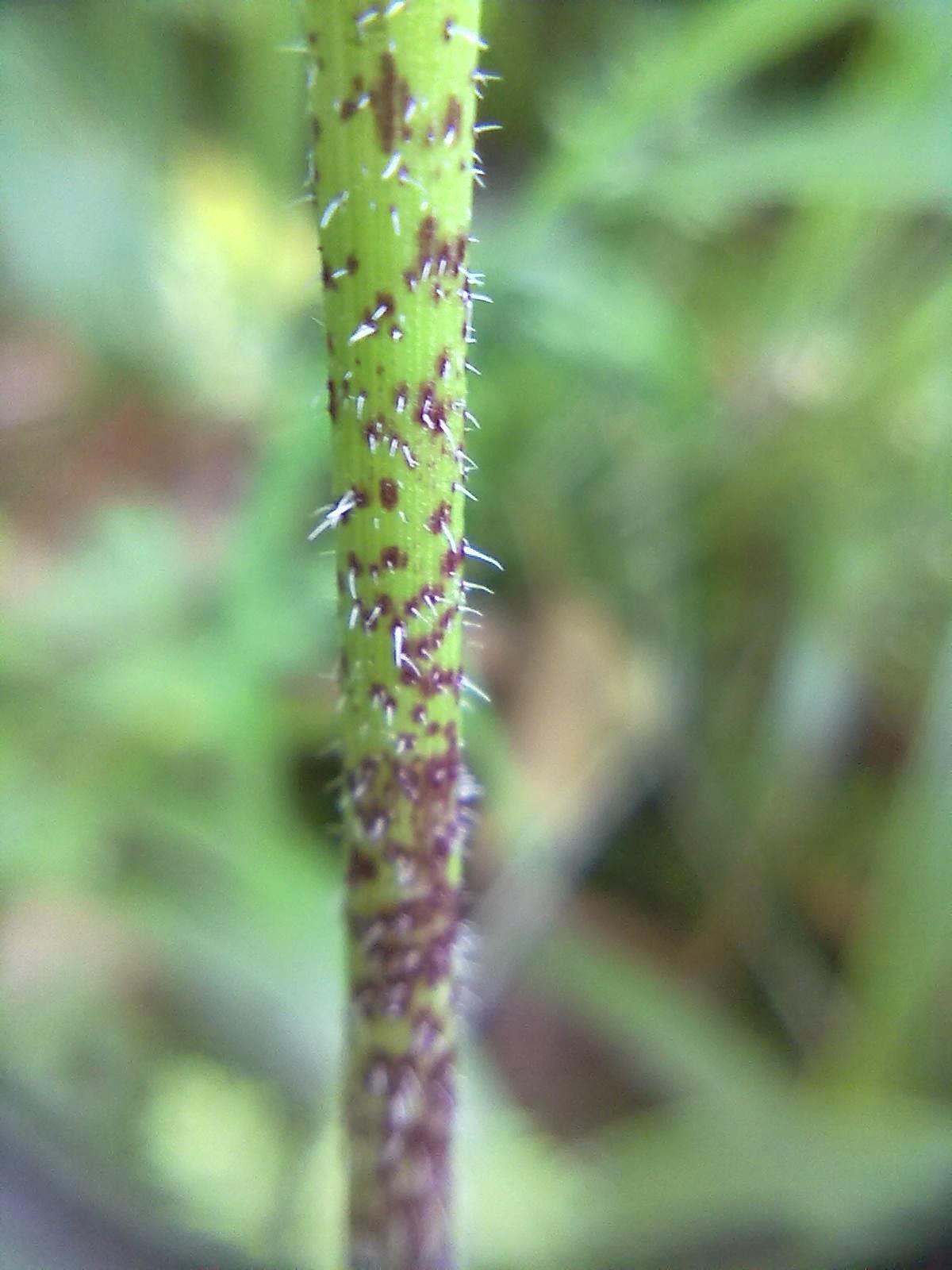 "Hairy" they said, leaning in to look, while leaning nervously away at the same time. "Bristly" said one, rather more observant than the others.

Here's my close-up photo of the stem, showing the purple spots, and showing the bristles or hairs on the stem.

This plant is actually Rough Chervil, the "rough" referring to the stem, obviously.

There are not very many purple-stemmed umbellifers, so it's quite easy to learn them: Hemlock, the poisonous one, has hairless stems with purple spots, and the stems are five-sided, not round.

Giant Hogweed has red spots on the stems, which are hairy, and as it's about ten feet tall, it's quite easy to identify.

Wild Angelica has a hairless purple-ish stem, but it's not spotty, it's more of an overall tint.

So you just have to avoid the one that has hairless stems and purple spots on the stems. Simple!

Getting back to our list of plants, how many species do you think we found?

Including the non-Hemlock, all the weeds such as nettles, dandelions, dock, and various thistles, the grasses and sedges, the climbing Bryony, both black and white (they are not related), a ton of cow parsley, hogweed, burdock and plantains, the predictable bindweed, stinging nettles and sticky willies, and not forgetting the occasional flowering weed plant such as vinca, deadnettles, Herb Robert which we all know, meadowsweet just thinking about flowering (this was a couple of weeks ago), and various willowherbs, there were well over 40 species, including some Oilseed Rape which had found its way out of the field.

One aspect of the greenery that surprised the people on the walk was the way that it varied in such a short distance. I pointed out that where we started the walk, it appeared to be a sea of cow parsley as far as the eye could see: but twenty yards down the towpath and the cow parsley had been replaced entirely by hogweed. Another twenty yards on, and there was a mass of Wood Avens, then suddenly a whole stand of nettles: the greenery is not homogenous, but shows distinct bands, as each species strives to smother out all the others.

I always find this interesting, in gardens and in natural areas: how different species flourish or struggle, and how the mix changes from one year to another.

Even on the basically man-made structure of the canal, the growing conditions vary hugely within short distances: one area might be heavily shaded by a big tree, then there might be a boggy area, then a more sandy section and so on. This makes a difference to the plants which can grow there, and of course it changes through the seasons, as well as from year to year.

And on the way back - it was an "out and back" walk - sharp-eyed Fiona spotted a Bee Orchid! 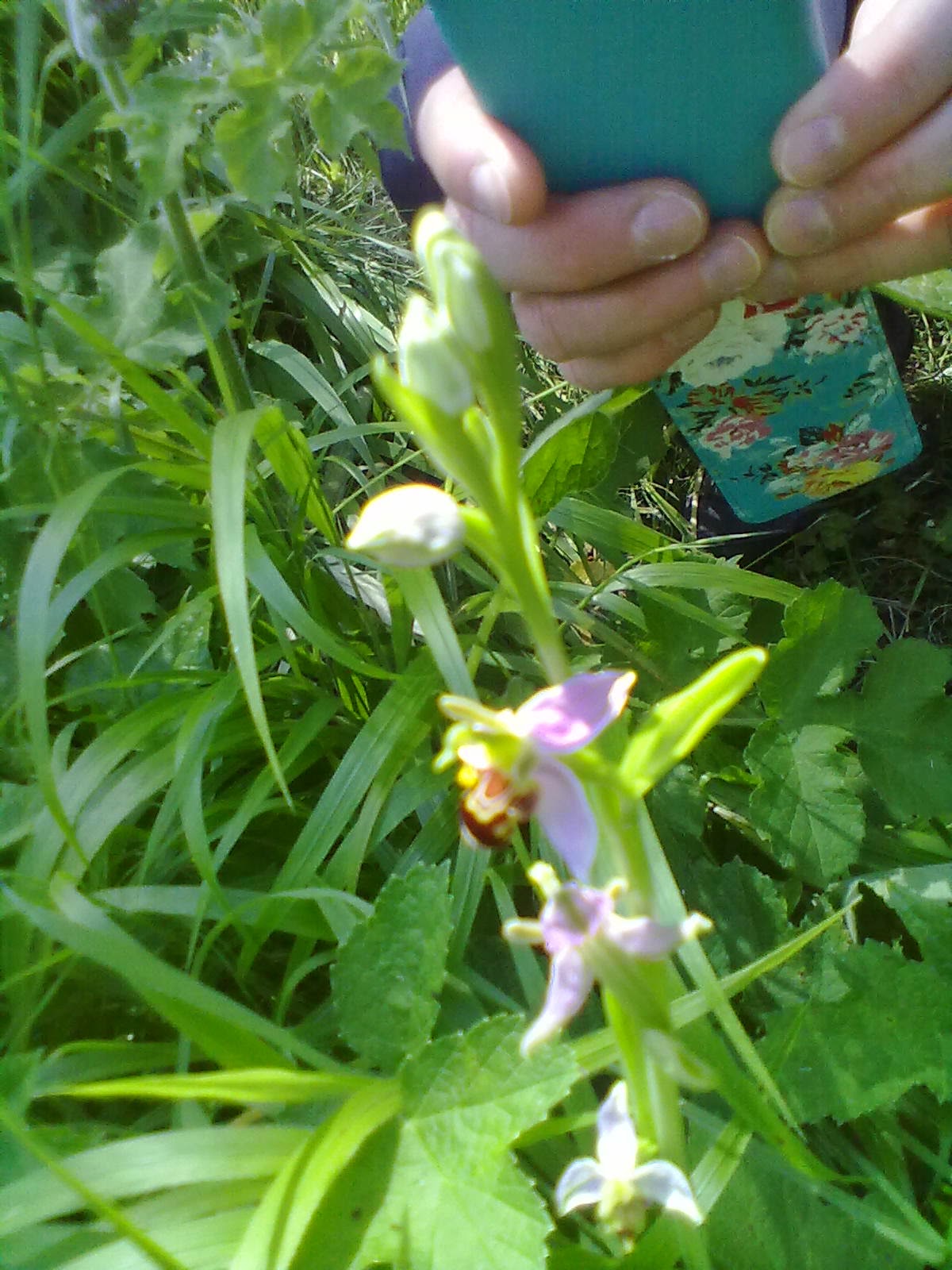 This was possibly the most interesting plant we saw: not actually particularly rare, but I hadn't seen one there before, and we had all missed it on the way out, so well done Fiona for spotting it!

Here it is as we found it, lurking among the hogweed, the wood rush and the figwort, and there is Fiona's camera, as we compete to take a picture of it.

Bee Orchids are, as I said, not rare, but they are extraordinarily pretty, and their proper name is Ophrys apifera: as you might know, an apiary is a place where honey bees are kept, so you can see where the latin name comes from.

And in case you can't quite see where the "bee" part comes in, here's my close-up: 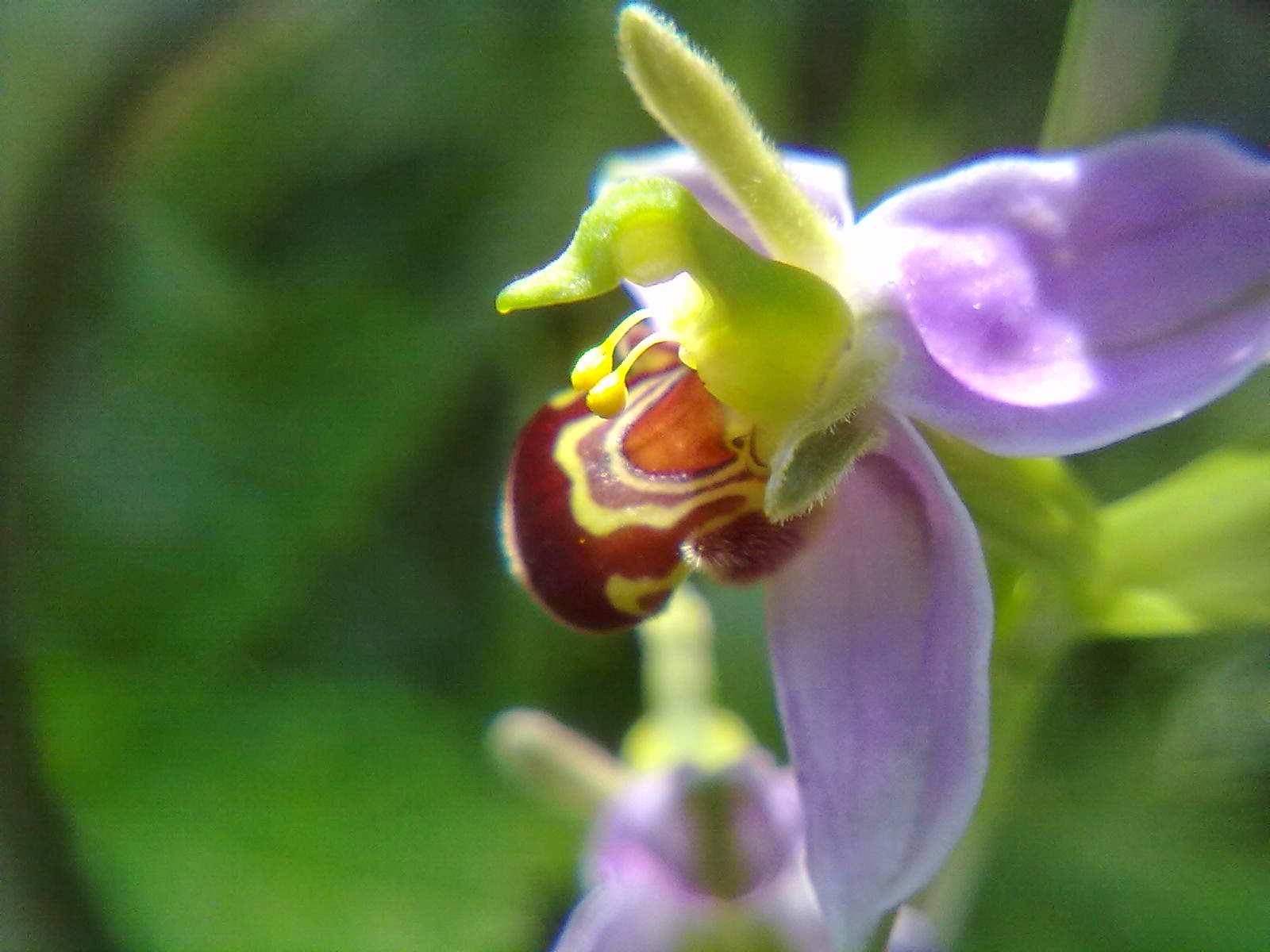 It's supposed to look like a bee with its head buried in the petals.

I'm not quite sure why that would entice another bee to come to the flower, as they are not normally in the habit of squashing up on top of another bee in order to get at the pollen, but presumably it works, as the flowers have developed a really rather sophisticated representation of a real creature.

Not bad for something with no eyes, is it!

Even when we had finished the walk, we managed to find something more of interest - along the path back up to the road, we spotted some Japanese Knotweed (Fallopia Japonica) growing underneath the hedge, having presumably escaped from someone's back garden. You might already know it, but this plant is a notifiable pest, as it is so very invasive, and is virtually un-killable. This is the fourth time I have found it in Wantage: twice in gardens, once growing in the ditch along the Denchworth Road where they are now building hundreds of houses on the old Stockham Park estate, and now in Challow. And yes, I have reported it to the authorities.

So that was our guided botany walk, a simple theme, for a light-hearted stroll, and hopefully the participants will, in future,  look with more interest at the greenery beside their daily walks.

Plants found along the Wilts and Berks Canal, short stretch from East Challow to the Stockham Park bridge:

Posted by Rachel the Gardener at 14:24