Alchemilla mollis - time to cut it back!

Autumn Slaughter is my term for cutting back the herbaceous foliage once it has gone over - usually done in autumn, as the name suggests, and to the uninitiated, it can look very brutal, hence the use of the word "slaughter". But it's worth it, as it removes all the faded, dying foliage which would otherwise attract snails and slugs, and it removes the old seedheads, preventing unnecessary weeding for the next seven years.

Seven years? Well, there is that old saying, "one year's seed, seven years' weed" which means that if you let something go to seed, it will take seven years for those seeds to stop germinating and appearing in your soil. As far as I know, no-one has ever undertaken a scientific trial to see if it really is seven years, as opposed to five, or ten: but seven sounds about right.

Last week I started cutting back herbaceous borders, even though it's nowhere near autumn yet: now is an especially good time to catch the Alchemilla mollis. The airy yellow flowers are just starting to go brown, which makes them look much less attractive, and this means that they are about to set seed.

In case you are not sure which plant this is, it's this one: 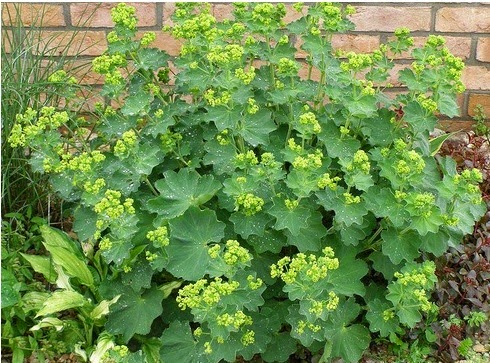 Recognise it?  It's a very popular cottage garden plant, with frothy yellow flowers, and leaves that have the property of being completely waterproof, so drops of water sit on them like bubbles of glass, which always fascinates me, on rainy days.

However, they also have the habit of setting millions of seeds, which germinate everywhere, in every crack or crevice of walls, patios, and paths, not to mention in the beds.

Nobody ever has just one of these plants... so in my gardens (and when I say "my", I mean "gardens in which I work") I cut them back as soon as they start to go brown.

This also has the advantage that if you cut them back really, really hard now, right back to the bone, cut off everything as close as you can to the base - if you do it now, then in a week or two you will have new growth, and in another week or two you will have a neat dome of fresh green leaves, which will look tidy right through until winter. You might even get another flush of flowers!

Here's a wide border that was looking a bit wild and overgrown - "before" on the left, and "after" on the right:

Yes, I know it looks a bit cruel and heartless, but I'm a professional! It's what I do!

Trust me, in a week or two it will all have "fluffed up" again, and in the meantime it gives a bit of air and space to some of the other flowering perennials.

So get out there and have a look at your borders: if they are starting to look a bit brown and faded, then now is the time to do a little early "slaughtering"!

Posted by Rachel the Gardener at 08:36