The willow of Damocles

A week or two ago, I noticed that a willow tree was starting to lean over the lakeside path in a somewhat alarming manner - so I brought it to my clients' attention,  they looked at it in horror, and promised to get the tree surgeon in as soon as possible.

Last week, it was leaning even further, and when I arrived there this week, they had taken my warning very seriously indeed, and had propped up the tree until the tree surgeon could get there and deal with it: 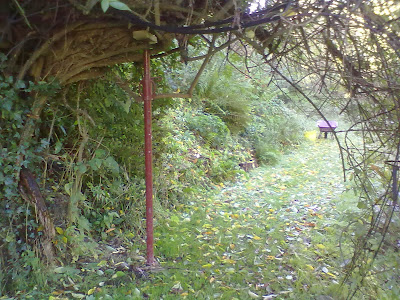 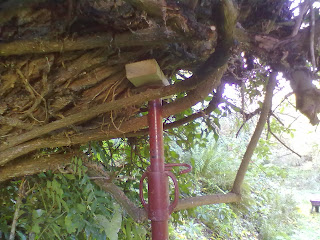 That's quite an impressive metal prop, isn't it?

I have no idea if my client had it lounging around in the garage, or whether they had to go out and hire it, but it's just the thing for the job, as it is a substantial Willow, as you can see, and it is hanging right over the path.

So far the tree has crushed the metal arch, over which I have been training the rambling rose for the last couple of years... and worst of all, those thick brown "branches" running on either side of the red metal support are actually the stems of this rose, along with the rather angular-looking one below. They now run on either side of the tree, and we are going to have to make some tough decisions before the tree surgeon arrives.

If we do nothing, the tree guys will simply chop off the rose stems, chop off the tree, and dispose of the mess.

I personally think it's unrealistic to expect tree guys to take any trouble over a climbing rose - the tree is dangerous, heavy, huge, and they are going to have enough of a job on their hands without being expected to take care of the rose stems, not to mention the fact that the stems have large numbers of rock-hard spiky prickles on them, which will make their job even worse.

However, I think it may be possible to cut off the bulk of the rose growth over the arch, in order to keep those big main stems: if  we can keep 10' or 15' of them, it will give it a big head-start next year.

To this end, I've been nibbling bits off the rose each time I pass en route to the bonfire heap, and I'm hoping that I'll have time to do a more drastic job next week - I have no idea when the tree guys are coming, so I need to get it done sooner rather than later.

It's somewhat ironic that earlier this year,  my client and I were congratulating ourselves on getting the rose to smother not only the arch, but the pump house and the tree above -  we agreed that this year it was the best display ever, and possibly the best we had ever seen, as it was making a perfect waterfall down the bank.

The plan is to install a new arch once the tree is safely chopped, then we can re-train what is left of the rose, and the new growth, to reinstate the tunnel effect at the path. And we can but hope that the rose will eventually find its way back up the bank again.
Posted by Rachel the Gardener at 10:06