Is it just me, or are there more ground-dwelling bees around this year than previously?

For about the dozenth time in the last month, I've been hard at work, industriously digging, and have been startled by an irate buzzing at ground level.

Closer inspection, and listening intently, leads me to find solitary bees, covered in earth, and looking very cross about it.

At first I thought that I was somehow knocking them off of nearby plants and accidentally burying them in the spoil, but a little research showed that many bees actually dwell in the soil. They dig themselves tunnels and underground chambers, and can go as much as a yard underground, which is pretty amazing, considering their size. 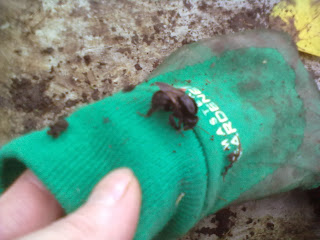 Here is this morning's little fella - not a terribly good photo as I don't carry a camera around with me when I am working, and my phone camera just isn't any good at taking close-ups. But I hope you can see that it's a good-sized thing, black all over, and furry like a bumble-bee.

It's not a leaf-cutter bee, they are not furry, so I have no idea what it is - if anyone out there knows about bees, I would be delighted to be enlightened!

As you can see, they are quite large and sturdy, and they seem to be totally non-aggressive - they stagger about drunkenly, buzzing continuously, which I assume is to warm themselves up, before eventually they fly away. Being kind-hearted, I try to put them in the sun somewhere to help them warm up, or at least to put them out of the way while they recover.

But it does seem a little odd that I have been digging the same gardens for over ten years, and it's only this year and last year that I keep finding them, don't you think?

Posted by Rachel the Gardener at 09:17