Well, we've all heard this one - bindweed (along with couch grass, and ground elder) is nearly impossible to dig out of beds and borders because even the tiniest little piece will regrow.

So the question is: Does it really grow back from a tiny piece?

Exhibit A, m'lud: six pieces of really fresh, plump, bindweed root - in this case, Calystegia sepium or hedge bindweed, which is the one I deal with most commonly. 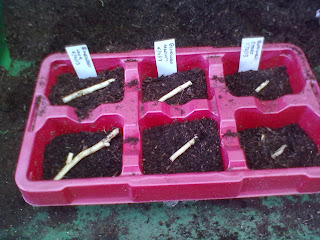 I then filled the modules, firmed down, watered well and set them aside to see what happened. They were sitting outdoors, in my cold east-facing front yard, along with all the other plants that I propagate and grow on, so they had the same watering regime as a large number of successful new plants. (I wouldn't want you to think that I had ignored them in any way.)

On the 25th July, just over a fortnight later, this was the progress: 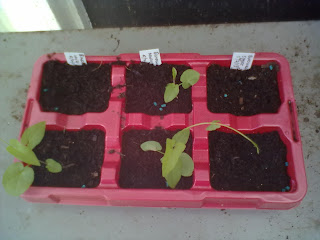 One of the 3" pieces was sprouting, along with both of the 2" pieces, but no sign of the little ones yet.

On the 9th August I decided the experiment was concluded, as the ones which were growing well were threatening to escape from the module tray (below) and although I am all in favour of experimentation, I'm not keen to encourage this particular plant! 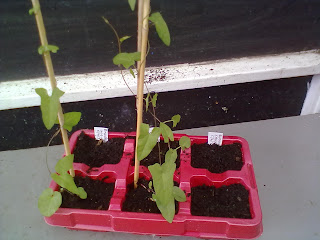 On investigation, the non-growing large piece was still there,but had rotted: 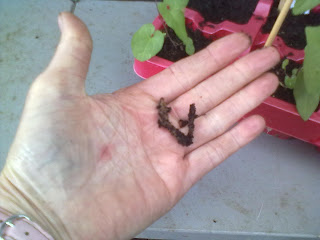 And down the other end of the tray, when I scraped away the compost, the two short pieces were still there, complete, un-rotted, but not showing any signs of sprouting. Interesting, isn't it? You could draw the conclusion that ¾" (2 cm) is just too small to be a sustainable root. But why did only one of the 3" pieces grow?

The whole point of the scientific method is that it is repeatable, so please go on and have a go yourselves, and do let me know the length of the smallest piece you have found to be successful at regrowth. You might be interested to know that this is my second attempt - I tried this in November 2012 with both bindweed and with ground elder, one piece each of the three lengths.

Here it was - bindweed on the left, ground elder on the right, all clearly labelled with the date, the size and the species, as I know just  how easy it is to forget which one goes where... ask me how I know this....

... and to my surprise, all six failed to grow, and by spring of this year they had all rotted away to nothing.

I don't think that these two simple experiments are enough to draw any great conclusions, but it possibly does throw some doubt on the view that even tiny scraps of these two garden menaces are capable of regenerating themselves and reinfesting the ground.

Although that does not mean that I shall be any less thorough in digging out the wretched stuff!

Posted by Rachel the Gardener at 15:16