OK, I've never thought that what I knew about planting up pots for spring colour etc was worth writing about, but recently I spent some time coaching a lady with very little gardening knowledge, and it made me realise that, actually, I do know an awful lot about the subject, and secondly that even what seems to be a really simple subject can contain elements that some people might find difficult.

So here, ladies and gentlemen, is my guide to planting up pots.

I have a client who is very fond of his pots, mostly in his front garden, but a few on the rear patio as well: at least twice a year I am given the task of clearing out the pots, refreshing the compost, and replanting with new items.

Today, he presented me with a large box full of assorted bulbs, and the comment "It's a real pity to change the pots over now, as the summer bedding is still looking so good... but I want to get the bulbs in now."

I suggested a compromise - I would lift out the summer planting, plant the bulbs, then replace the bedding on top.

I can't see any reason why it wouldn't work.. although it's not something I've ever seen described anywhere, before. 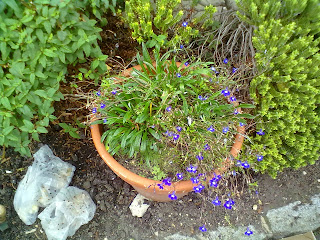 Here is one of the four matching front-garden pots - they are quite big, nearly knee-high. Two of them contain white geraniums, still flowering: the others have Gazania which have flowered their socks off all summer, and which are still producing new buds, although you can't see them in this photo.

Oh, and they all contain some droopy lobelia. 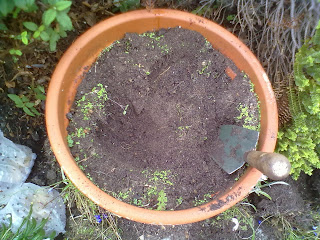 This is very easy as they are more or less still in the "plugs" from where I planted them.

Here - left - is the pot after I have dug out the plants, using my trowel to "cut" around each one, roughly a 4" square, a little larger than their original plugs, to allow for growth. 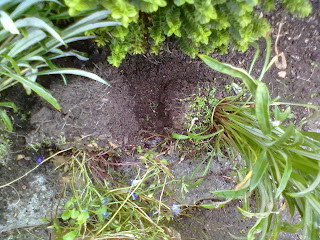 There are the de-plugged plants: or should that be the un-planted plugs?

*in Blue Peter voice*
"Put these aside carefully, children, we will be needing them again later."

I then scooped out the top several inches of tired old compost, and scattered it under the surrounding plants - it will have some small benefit as soil conditioner, even though there is not much in the way of nutrients left in it. 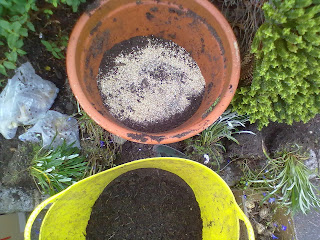 I then scooped out the bulk of the rest of the compost, transferring it to my yellow bucket, and adding a couple of handfuls of new compost, stirring the two together..

Once I had gone down about a foot (yes, they are quite big pots) I loosened the compacted compost, made it flat and level, then sprinkled on a fistful of Bulb Starter, a special mix of vermiculite and fertiliser that came in a pack with the bulbs. Never seen it before, but hey, it can't do any harm? The instructions on the pack seemed to suggest that you should stand the bulbs directly on this mix, the idea being that the vermiculite would help to prevent the bulbs from rotting.

Personally, I'm not convinced that it's a good idea: I think that having the bulbs sitting on fertiliser would "burn" them, in the same way that too much fish-blood'n'bone can burn the roots of new plantings in the herbaceous border. 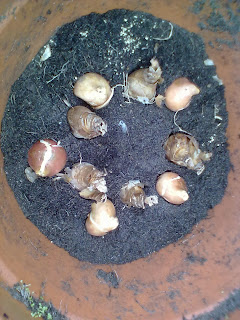 So, I scattered a thin layer of the old compost over the Bulb Starter, then added five large tulips - Queen of Night, my ultimate (so far) favourite, with five large daffodils (unhelpfully marked only as King Edward which, to my generation, is a potato) between them.

Here's the view looking into the pot from above.

As you can see, I don't bother too much about making a precise alignment of the bulbs, as they shift about when you add the soil, and the stems grow in all sorts of directions anyway.

I do make some effort to get them all standing upright, even though I have seen bulbs planted upside down, yet still producing beautiful flowers, which says something about the determination of nature. 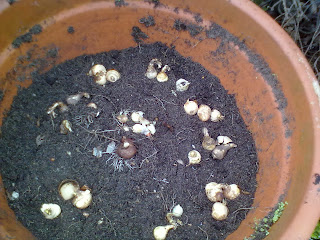 I then added several handfuls of the old compost, until the tips of the tallest bulbs were just about covered.

Next goes a selection of smaller bulbs: allium in bunches of threes, interspersed with crocus, and a handful of odd tiny bulbs which I found when lifting out the old compost.

Yes, I know, they should all have been cleared out when I did the summer planting, but they must have slipped past me... so they deserve a second chance, don't you think? 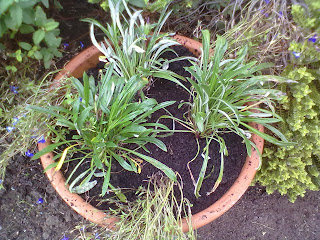 Right, I tip in the rest of the old compost, firm it down well by hand, then top up with fresh new compost, lovely and dark, yum.

All that's left is to replant the plugs into the top layer - it doesn't even disturb the bulbs - then water the pots.

When, in another few weeks, the bedding stops flowering, they can be quickly and easily pulled out by the client, without disturbing any bulbs.

I think this is a particularly clever idea, as bulbs do, by definition, come with their own food store, so they really don't need a whole potful of expensive new compost. But the fresh compost in the top couple of inches will hopefully give the bedding a boost, enabling it to carry on flowering for a while longer.

Of course, none of this economical re-using of compost applies if your pots are full of ants, woodlice, earwigs, roots, slugs, snails, eggs of the foregoing (like tiny round pearls, appear in little concentrations) or any horrible larval episodes. Sorry, can't quite bring myself to say Vine Weevil. Damn! I said it! Let's hope they didn't hear me...  anyway, if you find anything other than clean, if slightly tired-looking compost in your pots, then don't take chances, put it in the garden waste bin where it will be composted at high temperature, such that all nasty things should be killed off.

Oh, hang on, what do I mean by "tired-looking" compost? Well, that is one of those things it is much easier to show someone than to describe, but it's a combination of being light in colour, which indicates lack of ability to hold moisture any more, and a "dusty" texture when held in the hands. If you pick up a fistful and it all slithers out between your fingers, then it is "tired" and you will need to replace it with nice fresh material.

Normally, by the way, I would not plant Tulips out so early - traditionally, they don't go in the ground until later October or November, this is because they are prone to infections which are harboured in the soil, so by holding back the planting until later, when it is reliably cold, there is less chance of losing the bulbs.  But as these ones are going into mostly clean new compost, so I don't think there will be a problem.
Posted by Rachel the Gardener at 16:27