Roses: pruning to a framework.

Climbing roses, those which are trained up fences, walls, or other structures, need pruning just as much as bush or standard ("lollipop") roses.

The usual advice is to cut out a third of the oldest stems each year.

Well, that's fine in principle, but have you ever tried to do it? When all the stems are firmly intertwined, usually thorny, and form an inpenetrable matrix?

My preference is to cut climbing roses back hard each year, to a framework of old wood, allowing new flower-bearing shoots to grow each year.  Not dissimilar to what we do on bush roses, really, but on a "long and thin" scale rather than an "open goblet" scale. This has the effect of keeping the rose within bounds - and generally speaking, forces the rose to produce flowers at a height where we can actually see, smell and appreciate them.

The fact that my business insurance does not cover me to go up ladders has nothing to do with this pruning regime, honest...

First things first, when pruning climbing roses: you have to understand that roses (like a lot of climbers) think that they are still jungle plants. They strike out directly upwards, towards what they think is the rainforest canopy: then when they reach maximum height, they flower.

Usually, the trigger to flowering is when the stem can't go upwards any further, ie when it reaches the top of the canopy and starts growing sideways.

If you take a rose shoot and bend it gently over, as near to the horizontal as you can, it fools the rose into thinking that it has reached the canopy, so it will then  produce flowers.

This is the basis of all climbing rose pruning: try to get the stems going sideways.  If they are tied to arches or obelisks, try to get them wound around in a spiral, instead of zooming straight up. If you can instill this sort of discipline to your roses, you will make life easier for yourself for years to come.

And, of course, be brave about pruning: if you always cut them at eye height, they will always grow at least four feet before flowering. So if you want the flowers at eye height.... yes, you have to cut them four foot lower down. I know, I know, cruel and harsh, but that's what rose pruning is all about: as has been said,

"Ask your worst enemy to prune your roses for you."

Just imagine what a slaughter your worst enemy would do - then do exactly that. I've been following this maxim all my life, and it certainly works!

So, to sum up, when pruning old climbing roses, you have to be very brave, and really cut them back hard.

Here are some climbing roses in my care:

Firstly here's an old one that I have been rejuvenating over the last couple of years: it's in a pot, in a corner courtyard with trellis on both angles: and had developed into a monster plant, about 10' in height, with all the flowers way up there out of reach.

Two years ago,  I removed half of the thick old stems, right down to the pot: gave it lots of fresh compost, lots of water, and the next year it repayed me nicely by sending out some good new shoots. I forced these to curve over, and tied in as many of the next year's new shoots as I wanted, pruning off the rest. 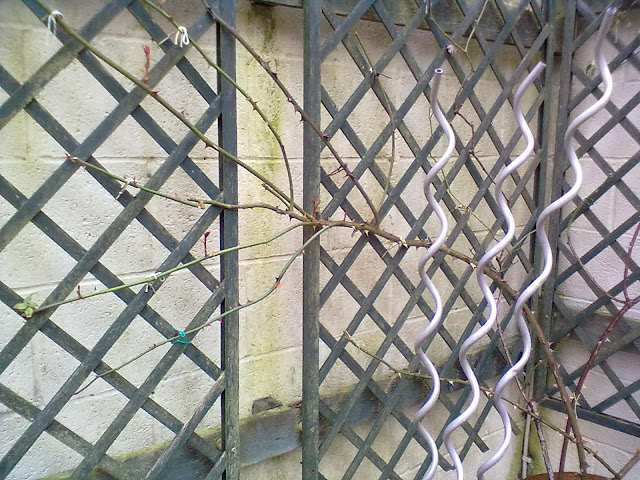 Now you can see that my new framework is taking shape, moving the growth across as close to horizontal as possible, to spread the flowers out over all the trellis panels, instead of just one.

Here's a good example of One I Prepared Earlier: this used to be a wild mess of spiny shoots,  and I have been patiently tying in the best new shoots, and cutting out those going in the wrong direction. 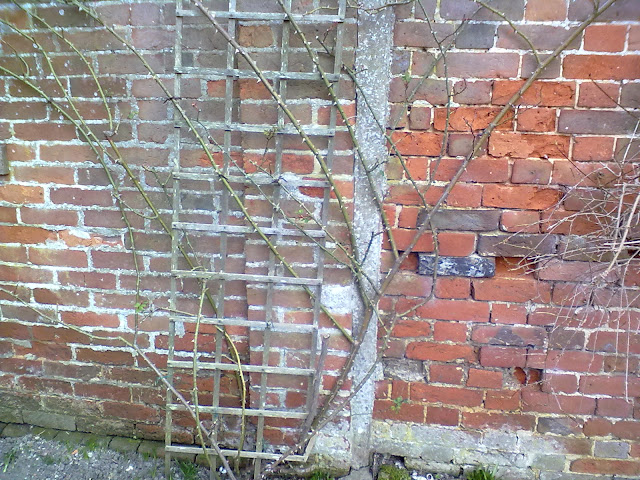 You can see that the strongest shoot was on the right, but there is no room for it to spread any further, and it was too rigid to bend it over to the left. So I kept it on the right, and tied in all strong shoots heading leftwards, pruning out any that dared to try going right.

By doing this, I have managed to get the rose to grow in the direction that we want it: last summer the wall was absolutely covered in flowers, and looked fantastic: and now, through the winter months, we have a neat, organised, formal shape to look at, instead of a mad mess of tangle and thorn.

It's not quite perfect yet - there are a couple of low shoots on the left that aren't quite in line, because I am waiting to see which is going to be the strongest shoot. I will then remove the others.

And as for this next poor thing (below): well, don't be too sorry for it, it's a monster thug of a rose, which used to gallop up the fence every year, trailing great thorny lashes in all directions, with all the flowers hanging over the top of the fence for the neighbours to enjoy.  The stems were as thick as my wrist, and completely bare to a height of about four feet, despite my efforts every year to force it to flower lower down.

Definitely a case of You Have To Be Cruel To Be Kind.

At last my client saw sense: "Cut it right back!" he said, "I can't stand it pushing the fence over any more!"

Restraining the urge to whoop and  holler, I leapt for my pruning saw and cut the old, woody stems out right down to ground level, keeping the five strongest new shoots and arranging them fan-wise. 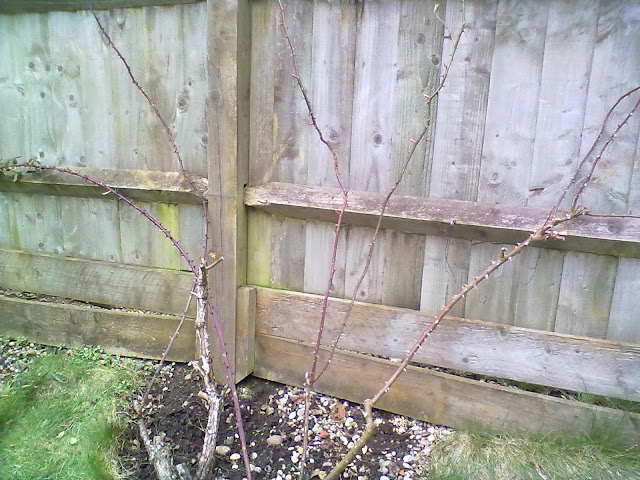 I  know it looks like nothing at the  moment, but trust me, I've done this dozens of times and I haven't killed a rose yet. *she said, touching wood*.

This will form the basis of my future framework for this rose:  these shoots will thicken up and set in place, and each year from now on I will trim back all new growth to these shoots.

After a radical pruning like this, I always give the roses a feed - a fistful of balanced food such as Gromore will do it, along with a dollop of home-made compost if at all possible. And a good slosh of water, even in the middle of winter.  Most of the modern commercial fertilisers are slow-release, and many of them are temperature sensitive, so the nutrients won't be released and wasted now: they'll be ready in a few weeks' time, when it warms up a little. But it's better (in my opinion) to add the fertiliser now, while I remember, rather than relying on a client to do it later.

So there you are, rose pruning to a framework - and if you don't have a framework, how to start one.

Posted by Rachel the Gardener at 10:53