"We'll read to you, as you disappear,"

I was up to my ankles in squelchy mud at the time, and sinking.   It's good to know that my fellow Botanists are a caring, sharing, bunch, willing to go that extra mile to ensure the comfort and safety of their colleagues. 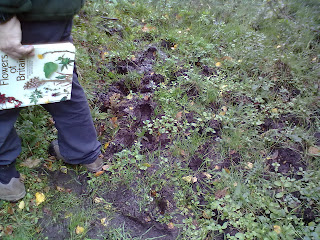 It didn't look that bad when I stepped off the path onto the mud - left - and two of the others had already walked across it in perfect safety.

In retrospect, my mistake was in standing still... and you know how it is, once you start to sink, trying to lift one foot just makes the other one sink even faster.

Luckily Morag, from firm ground, extended a helping hand to steady me while I rocked first one foot, then the other, free, with disgusting slurping noises (from the mud, not from my feet).

Meanwhile Prue and Stephanie were calmly discussing how fast I would sink. Stephanie kindly suggested that the last they would see of me would be my hand-lens, held high above my head, Excalibur style.

Mike and Rob were too busy laughing at the expression on my face to offer any help.
I tell you this just to let you know that even during a quiet mid-week botany outing, danger still lurks around every corner.

This week we were in Sydlings Copse, yet another BBOWT nature reserve, just north of Oxford. I am constantly amazed how, just off a busy road, there can be a dear little nature reserve, carefully fenced and maintained, and with a staggering variety of habitats.

We found a number of common weeds wildflowers, some of them new to us, some of them now getting quite familiar.  We also encountered the ponies, who were very curious about our books and hand-lenses, and kept checking to see if they had somehow become edible...

Unluckily for us, we also encountered one of the wardens, who told one of the crew off for picking a specimen in order to look at it more closely.  Normally we would all agree with this stance, but in an area being deliberately grazed by ponies? Hmmmm... and if you're going to be picky, BBOWT, it's high time the feet of those ponies had some attention from the farrier, they are desperately in need of a trim. So there.

Anyway, we escaped the watchful eye of the warden and wandered through the reserve and down to the stream-side area, which is where I found the quick-mud.

As well as all the "usual suspects" we found Veronica beccabunga - great name, huh? As usual, I don't have a photo of it, you'll have to google it, but it was well worth getting stuck in the mud for.

And guess what else we found: yes! Common Reed! Phragmites australis, to those who know, and we know something interesting about this plant, don't we, boys and girls?

Much laughter from the crew, except for Mike and Stephanie, who hadn't been on the Abbey Fishponds outing.  So I had to explain it to them, and demonstrate the swivelling leaves, while the rest of the gang either laughed or groaned, having had to hear it several times.

But honestly, they swivel! Don't take my word for it, get out there and try it for yourselves!
Posted by Rachel the Gardener at 17:01