Talking of last week - as it's been too cold to work this week - I did a bit more Hydrangea-wrapping, for those who expressed an interest. 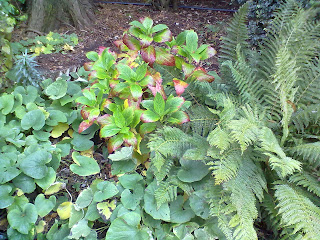 Actually, it was about two weeks ago - my, how time does fly - and this was a special case.

Firstly here is the hydrangea in question, surrounded by a sea of Brunnera, with a splendid fern adjoining it.

The first job was to gently tie up the fronds of the fern, to keep it safely out of the way.  Not rocket science - just make a loop, place it a third of the way up the plant, and gently pull it tight. Then make a couple more loops, above and below, and pull them tight as well.

This keeps all the fronds neat, and prevents anyone stepping on the base of it. "Stepping on it?" you ask? Yes, stepping on it - for we are expecting the tree surgeon and his men in the near future, and the more precious items in this area are going to need protection. 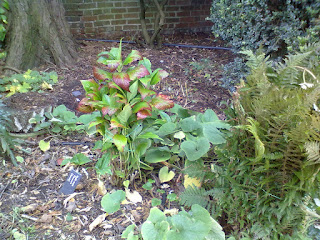 Step 2: chop back all the Brunnera. They won't take any harm from the chopping, and I suspect they won't actually be badly hurt by being trodden on, but we will see.

Originally I suggested to my client that we cut them down in a strip, to make a clear pathway, to encourage the men and their big boots not to trample the entire bed.  But on reflection, we decided that it's a huge tree, and the men would be working with a massive amount of wood, being both heavy and dangerous, so it would make more sense for us to protect the plants, leaving them to trample the area as much as they needed to.

I had already moved "Pat Elmore" (the sculpture) to a safe place under the trees, along with her plinth, so all we had to do was cut down/dig out/cover upwhat was to remain.

Once the fern was tied up and the Brunnera chopped back, it began to look a little more hopeful: I carefully dug up and potted some nice Aster divaricatus or Wood Aster (now apparently known as Eurybia divaricata, hate the way they keep changing the names...) which have delicate white daisy-like flowers on long, lax, black stems which zig-zag around, hence the name: just think of diversions, divaricatus, it will all make sense. 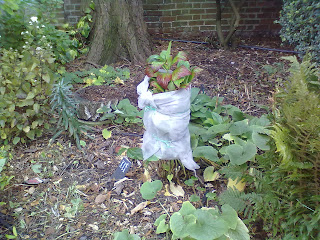 A couple of other treasures were dug up and potted, and a couple of less-treasured items, such as the Digitalis ferruginea on the left, were left to fend for themselves, along with the geranium at the Corsican Ivy at the back.

This clearance revealed another Aster divaricatus which had been hiding - there it is, on the left - so I whipped that one out as well, and stuffed it into a pot.

Well, I say "stuffed it into..", by which I mean that I carefully and lovingly potted it up.

Then the Hydrangea was trussed up in fleece, like a rather unappetising Christmas turkey.

But, aha, I can hear you thinking that I didn't make a very good job of wrapping this one up.

Well, there's a reason, and here it is: 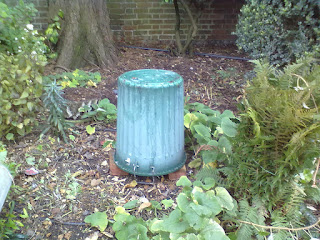 Yes, the incomparable romance of an upturned dustbin standing on a couple of bricks.

If the tree men still manage to break the Hydrangea after all this, well, then I guess it was just meant to be...

Of course, my client and I accept that any tree work bears the danger of destruction to the plants below, and the tree in question (the Scots Pine at the back) has been assessed as "about time it was removed" as it has a split trunk, and there is the constant worry of it splitting one day, and crashing down on the neighbours' outbuilding, represented by that wall behind the trunk. It's not a particularly lovely outbuilding, but my client feels, quite rightly, that any tree-led destruction would not help neighbourly relations, so she has taken the bold step of having it cut down now, before something happens. 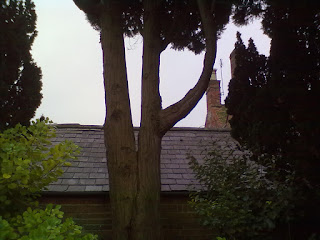 And here is the reason - as you can see, split trunk, and it's quite a substantial tree.

We are both quite keen to see how the bed below the tree responds to the sudden increase in light and rain that it is going to receive next spring!

Posted by Rachel the Gardener at 17:51