Winter, a time to reflect on gardens visited earlier in the year...

Back in June I went to Cerney House gardens, which truly is a "hidden treasure" of the Cotswolds. You need a map and directions to find it, as it's tucked away up a narrow winding lane, and you have to drive up and up, far beyond where you would think it would be. Suddenly you find yourself on what is clearly the entrance to a proper "old" estate, and then you get directed into a field to park.. and that's it. No-one on gate duty, no-one to tell you where to go, and no-one in sight.

Using your native intelligence, you walk up past what appears to be someone's private cottage, and eventually you find the way in, greeted only by an Honesty box, into which you slip the money.

Don't you think, by the way, that the whole Honesty Box thing is so typically and wonderfully English-garden? Where else could you just leave a flimsy wooden box with an invitation to drop money into it, and still find it there at the end of the day? With money in it? I do the same at my Plant Sales Bench, there is a sturdy wooden box, and although sometimes I am disappointed, most of the time it contains the right money. Wonderful!

Anyway, after popping the money in the slot (as always, nervous and uncomfortable, and strongly feeling the desire to wave the coins aloft as much as to say to any hidden camera "Look! I'm paying!") you go through the doorway into basically a walled garden, set sideways along a slope.

I've been there twice now, and have never seen another soul... not another visitor, no gardeners, no-one trying to flog me garden tat or ludicrously expensive guide books, no-one.

The overall effect is delightfully shabby, with a good set of weeds, and a fair amount of topiary waiting to be trimmed, but that only adds to the Sleeping-Beauty charm of the place.

It also benefits from being set partly in, partly across a steep valley, so there are no vast empty spaces on the treeline, but a nice comforting feeling of being enclosed.

The layout is more or less simple straight strips along the slope, like contour lines made into hedges, which give a succession of vistas. Here's one, with a cute little stone summerhouse at the far end: 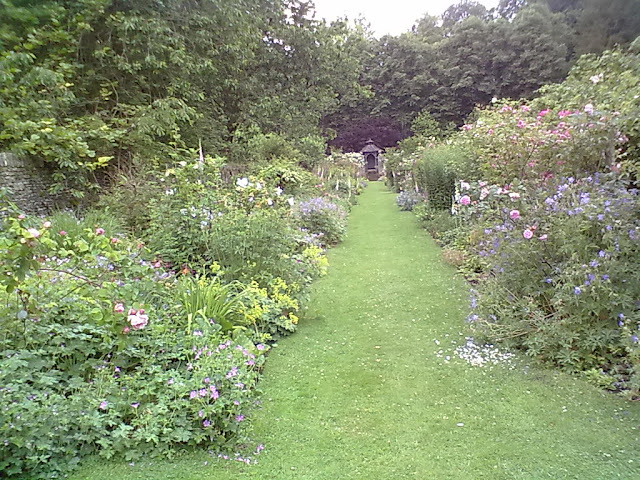 As you can see, herbaceous borders, more or less tidily fulfilling the instructions of "big ones at the back, little ones at the front" and frankly, it's a perfectly sensible way to arrange things.

Being an amateur photo, the general effect here is of a mass of greenery with splodges of colour, but in real life it was somewhat more organised. There was a feeling of colour co-ordination, not slavishly, but melting gently from one shade into another as you strolled along the grassy paths.

In one strip I found the classic box-edged  "knot" gardens - well, every garden of this size has to have them - but they had made a bit of a twist: the knots contained fruit trees, making it impossible to see the overall pattern of the knots. Not exactly standard!  Also, and I really liked this idea, they were pretty much empty.

I gathered from some scattered labels that they are stuffed with tulips in Spring, and that must be a sight to be seen. Then they seem to grow some of their veg in them - you can see,  below, the remains of a runner-bean wigwam - and other than that, they leave them bare.

As you can see, desperately in need of clipping (this was in June) but nonetheless still very attractive. 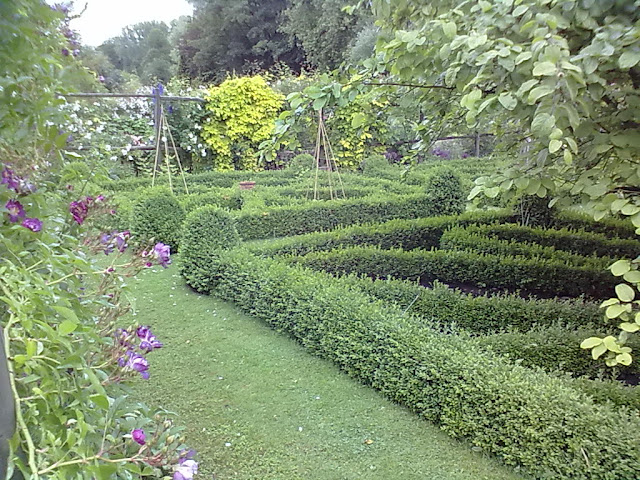 I was rather taken with that idea, to have nothing but spring flowers and fruit trees in my knots - although I expect I'd get tired of trying to clip intricate hedges with an apple tree snagging my hair and poking me in the eye, so I'd probably either skip the fruit trees, or (more likely) prune off their lower boughs to allow clear access to the box.

At the back of the garden I came across a nice use of foliage: a run of Cotinus coggyria, probably "Royal Purple", all substantial shrubs but cut down to stumps a mere two foot off the ground, and allowed to grow super dark foliage at knee height.

The stumps were at least 8-9" across, so they must have been quite hefty specimens at one point; I always love to see evidence of someone who is even more hard-hearted at cutting things down, than I am.

There - isn't that lovely? 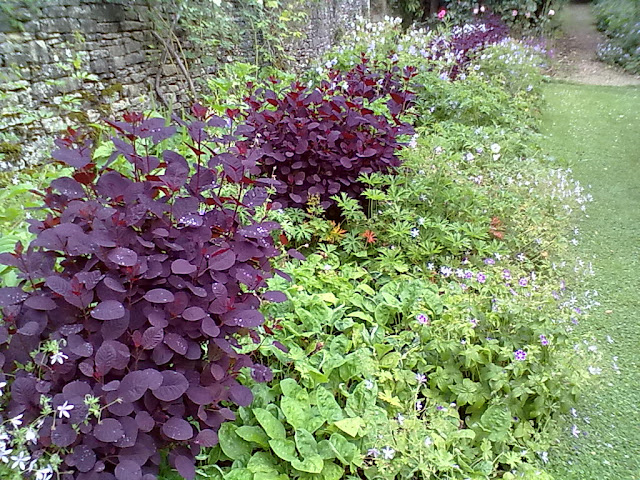 Fabulous foliage right where you can see it,  terrific contrast with the other greenery, and a nice compliment to the wall behind.

It would have been so easy to have left them as standard shrubs, and I have no idea if the drastic chop was intentional, or the result of damage or disaster: but it certainly works.

After wandering up and down the strips a few times, I found my way to the far end of the garden, containing a raised area for herbs.  Not just your average sage and chives, but genuine "herbal" herbs, all beautifully labelled with their names and former uses. And in some cases, a warning!

Beyond that, again, I found the working area, comprising greenhouses, composty heaps (always of interest) and rows of plants in pots, presumably cuttings that were being grown on ready for use in the garden proper.

I love to see that sort of thing, it's always interesting to me to see how others do it. Round the back of the greenhouse seemed to be a woodland walk that is probably wonderful in spring, and returning to the main walled garden, I made my out past the "house" gardens (far too shy to go and have a good look at them), past the ice house, and back up the main drive to the parking field.

And still, in two visits, not another person in sight. *sigh* perfect...

Posted by Rachel the Gardener at 16:50