Recently I wrote about the Road Bank: today it's the story of the Grand Bank, on the other side of the lake.

This bank is not quite as steep as the Road Bank, and as it is south-facing and in full view of the house, it definitely gets the most attention.

Last winter, the client took the plunge and had a couple of sycamores removed by the tree surgeon. This was quite an operation, not least because first of all, they had to get planning permission from the Council. After submitting the application, and waiting for several weeks, a nice man turned up unannounced with a map and a letter, and asked us to point out the trees concerned. He confirmed that they were indeed common old Sycamore (Acer pseudoplatanus) and there was no problem with us removing them.

Resisting the urge to say sarcastically "Thenk yew SOOO much", we waved goodbye to the council, the client gave the tree surgeon the go-ahead, and next time I arrived for work, wow! Daylight!

It's a bit of a truism that you have no idea how much light a tree steals from your garden, until you have it chopped back or, as in this case, removed entirely.

Suddenly there was a massive area of bare bank, the grass was visibly growing in the newly-arrived light, and all the garden paths had mysteriously gained a lush deep covering of new wood-chips....

Stage Two of the operation was for Alan The Handyman to do the terracing: the rest of the Grand Bank is substantially terraced with half-round logs, and the plan was to continue this across the newly exposed section.

Stage Three would be planting it up: we decided to install a few key shrubs to "match" those in the adjacent bank, to plant out a selection of new herbaceous items, plus a couple of roses, then to gradually fill in with cuttings and segments of the original planting, so that in a year or two's time, there wouldn't be a visible distinction between the old and the new.

Stage Two-B, which mustn't be forgotten, is to send the gardener (me) up the terraces to dig them over, as they had been severely compacted by Alan the Handyman and Roy the Helper and their big boots. Luckily for me, the boys, as part of their job, had barrowed up loads and loads of our home-made compost to fill up the new terraces. Not quite so luckily, they then stomped all over them, so I had an interesting hour working my way backwards along each terrace, forking the soil loose without flicking it over the edge, and without a single careless mis-step, which would have sent me tumbling a considerable distance to the ground.

Here we are, then, on the morning of Stage Three: the impressive terracing is in place, the soil has been enriched with compost, well trodden in, then forked loose,   and a couple of hundred pounds' worth of plants are sitting on the grass, roughly in order, ready for planting. And here we are an hour later, all plants in position: but wait, where have they gone? 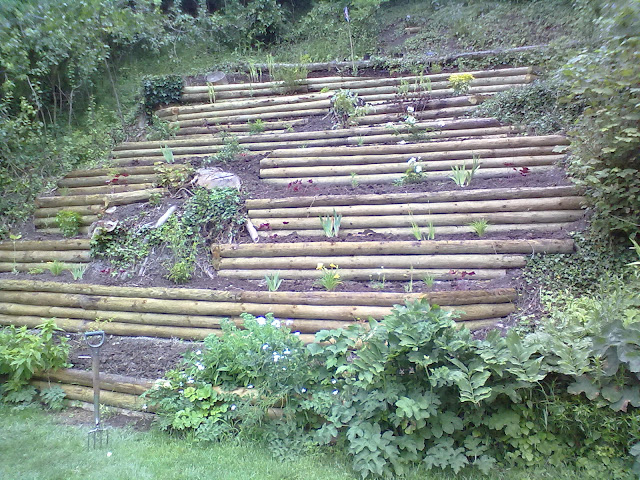 Oh, there they are, they have disappeared in the sheer size of this new area.

Four terraces up, by the way, you can see one of the mighty stumps, then there are two more on the top terrace, top left hand of the picture.

Getting the stumps out would have been extremely expensive, so at my suggestion, we left them there so that their roots would continue to support the bank - can you imagine the damage if we had tried to remove them? -  and our plan is to apply glyphosate to the new growth repeatedly over the summer.

(The client thinks that I am going to leave the ivy in place, but I am fully intending to glyphosate the ivy as well, mwah hah haaaahh)

This all occurred three or four weeks ago, and the new planting is settling down well. I asked the client to water in the first week, but it has rained pretty much every other day ever since planting, so irrigation has not been necessary.

I have been up the terraces every week to weed, and to check on the new plants: and to apply glyphosate to the new sycamore leaves, and the old ivy leaves. All is going well so far, and in the next couple of weeks I will be lifting and splitting some of the old planting, and transferring segments into this area.

If anyone out there has worked on a more impressive piece of terracing, I'd be interested to hear about it!

Posted by Rachel the Gardener at 09:15