Towards the end of last August, I went on a Botany field trip to the Abbey Fishponds - ever heard of this place? No, me neither. It's a BBOWT nature reserve, which is quite literally in the middle of the housing estate, within the ring road of Abingdon. 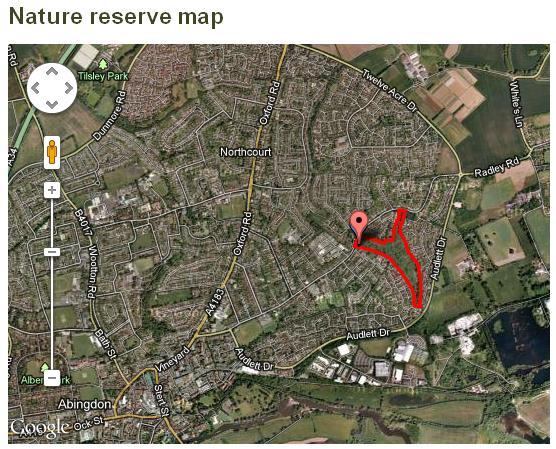 There you go, amazing, isn't it? Clearly within the ring-road.

Four of us met up in a side street, having never been there before, and none of us really believed that there would be a nature reserve right in amongst the houses.

Unfortunately, it was well used by dog walkers, so there was dog poo all over the place, which is about as disgusting as it gets:  luckily botanists are in the habit of wearing wellies, and eventually you just ignore the poo, trample all over it,  and ensure that you clean your boots off before leaving the site. Yuck.

Right, moving on from despicable dog-owner who won't either pick up the poo, or train their damned dogs to do it on command....

We'd been given a minor task: we were told to look out for some Clinopodium calamintha (Lesser Catmint) which was "on one of the medieval banks".  Otherwise, we were there just for pleasure, to see what we could find, and to practice our ID skills.

As we entered the reserve, the first plant we met was the Common  Reed, Phragmites australis. It's the one you often see growing along the ditches beside the road - tall green stuff, with purple plumes. It's certainly all along the A338 between Marcham and the Hanneys, round the Venn Mill area.  I forgot to take any photos, so you'll have to look it on on Google if you don't already know it. It's a bit of a pest, as it's very invasive, and tends to crowd out other plants.

But I'd read something interesting about it - apparently the leaves are not firmly attached to the stems, they can swivel.

How can leaves swivel? They have to be attached to the stem, surely?

The others looked at me as though I were bonkers (don't worry, I'm used to it) so I took hold of one of the stems, grasped one of the long, thin leaves, and gently swivelled it round the stem.

Good lord! It swivelled! It really did!

We decided that the strategy was developed to prevent damage to the leaves - by swivelling around the stem, they always line up the way the wind is blowing, so none of the leaves have to be flapped up and over themselves. Thus, none of them are subjected to folding and damage.

If you look at a stand of these reeds, you can see them doing exactly that - all the leaves line up in one direction, as though someone has carefully combed them.

And if you take hold of one and gently move it around the stem, you can see how it happens.

Go on, get out there and try it for yourselves, it's amazing!

Anyway, that broke the ice, and we wandered on through the reserve, stopping every few paces to find and ID the next plant. Unfortunately I didn't make a note of what we found as we found it, so I can't give you a list - sorry! We didn't find the Clinopodium calamintha (Lesser Catmint), but then we weren't really sure if we'd actually found the medieval bank or not.

However, for a first outing we all enjoyed ourselves, and as dusk fell, we realised that we'd only actually gone about half-way through the reserve.

So I'm sure we'll go back there again some time.
Posted by Rachel the Gardener at 17:04