Willow Bridge: the taming of the beast

As you all know, the weather has been absolutely foul this year: apparently the wettest April since records began in 1912 (is that as far back as they go? Really?) and the wettest June in the same time, and even the wettest April-June.

It now looks as though we are going for the wettest July on record, too.

So much so that I have done barely 50% of the working hours that I normally do (strains of "hearts and flowers" in the background on the violin) which means that I am seeing big changes in the gardens which I normally attend weekly.

This one is a case in point:  in this garden there is a fairly boring wooden bridge, made of inelegant scaffolding poles with a wooden deck, and wooden beams for handrails. It doesn't look terribly pretty, so a few years ago when I was installing some willow fedges elsewhere, the client suggested that we use the leftovers to "cover" the bridge. I came in to work one day to find that they had simply divided the leftovers into equal numbers and rammed them into the bed of the stream, then tied them roughly to the scaffolding. Not quite how I would have done it, but it seemed to do the trick, and now they are well established.

Generally, throughout the summer, I spend maybe 20 minute a week weaving in the new growth to keep it under control.

This particular week, I arrived after missing a few sessions, to be asked on arrival to "do something" with the bridge, as "the guests can't get across it without getting soaked!"

When I saw it,  I immediately understood the problem: 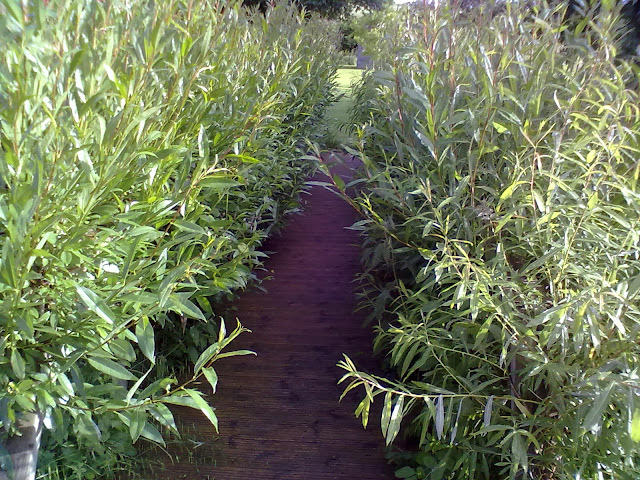 So I set to work, and an hour later, without using string or secateurs, simply by weaving it, and taken from exactly the same position: 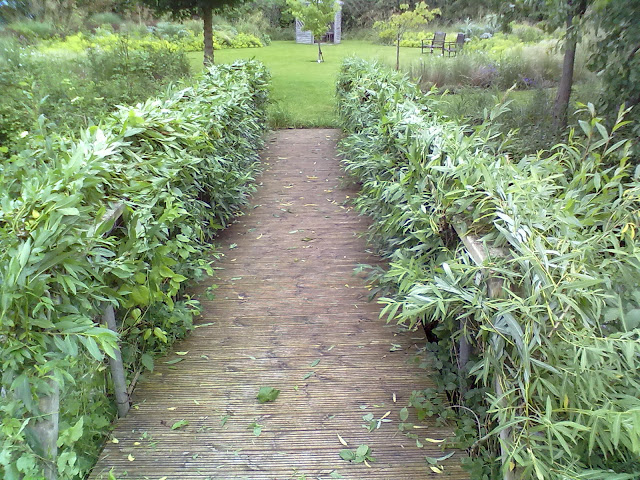 Bit of an improvement, I think. Nice dry guests, happy client. Result.
Posted by Rachel the Gardener at 17:53