Did your olive trees suffer this year?  If so, you are not alone, I have received several questions concerning what to do with dead or nearly-dead olives.

So here is a tale of encouragement: one of my clients had two olives in huge terracotta pots: great tall things, with about 4' of clear stem then a lollipop of foliage, several years old. They had been in a fairly well sheltered courtyard gardens, on different sides of the house,  and last winter they both suffered terribly.

The one to the north of the house took the whole summer to die, and almost once a month I would find myself climbing up on my steps to chop off yet another branch that was clearly dead. By June I had had enough, and suggested that it would never regain its form, so we agreed to cut it right off at soil level, water it well, and see if would re-grow..

By July, a few tiny shoots were to be seen - by August the best one was a foot high - so in September, I removed all the weaker shoots, gleefully inserted a cane  and tied the strongest new shoot firmly upright.  Two weeks ago, I had to replace the cane with a longer one, as it has made about 5' of growth, which I think is quite remarkable.We may yet save it.

The other one, however, was much sorrier:  it hadn't been watered at all during the summer, and by about August it was clearly dead. Again, I sawed it down to soil level, but  I arrived one morning to find the pot empty, and later I spotted it on the bonfire heap.

Time passed, bonfires piles were burned, and to my surprise, in late September, I was adding some cuttings to the bonfire heap when I noticed that the blackened, burned root of that olive was actually sprouting. I showed the client, as I thought it would amuse them, and they immediately wanted me to replant it.

"Oh no!" I groaned (silently, of course - I never disagree with clients if I can possibly help it) "It will never, EVER recover!"

But I cleared out some of the soil from the pot, added some fresh compost, re-planted the scorched, truncated thing, watered it and left it. I've been watering it most weeks ever since, and  I just wish that I had taken a photo of it when it was fresh off the bonfire, because last week, lo! and behold, a positive thicket of shoots.

I selected the strongest, carefully pulled off all the rest, and inserted a cane. 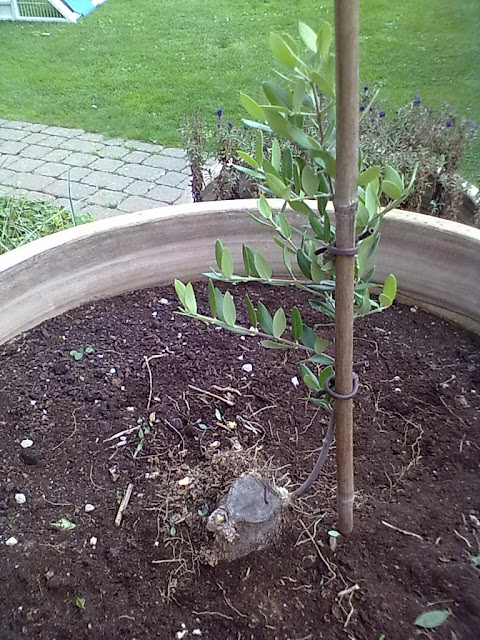 Just as with the other one, I have selected the strongest shoot, and tied it firmly upright.

For now,   I am leaving the side branches, as it will need some foliage.

As it grows, I will remove the lower branches, to reform the clear stem.

And in time, I will top up the compost in the pot to cover the original trunk.

You can clearly see how big the trunk used to be!

Then, this week, we had our first taste of frost - just a little on the grass, but a reminder that October is nearly gone, in fact the clocks go back this weekend: and once we are into November, the cold weather might arrive.

Now, as these two olive trees have tender, new little shoots, we definitely need to protect them, so it was time to wrap them up in fleece for the winter.

Slight problem: the House has paying guests all through the winter, and no-one wanted to see scruffy bundles of horticultural fleece tied up with string, getting blown about all over the courtyard and having to be chased, retrieved and re-tied every week. As we had last year.......  so I was tasked with thinking up a more "stylish" way of protecting them.

In the garage we had some willow wigwams, which had been cleared of sweet peas a few weeks ago. Could they be pressed into service, I wondered? At the very least they would stop the fleece from blowing about all over the place. 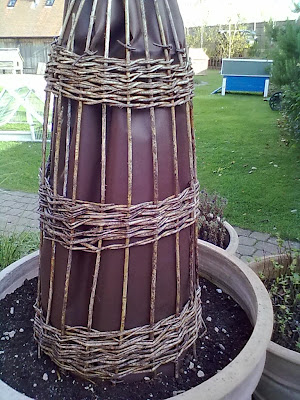 Well, what do you think?

The fabric has a multitude of tiny holes in it, being landscaping fabric, so it is neither as opaque nor as dense as it appears, and I am hoping that it won't leave the shoots too much in the dark.

I guess that we can always take the lid off, if we get a few nice days.

Apart from slight concerns about the light, I was so pleased with the effect that I repeated the work on one of the larger wigwams, for the other olive tree shoot. 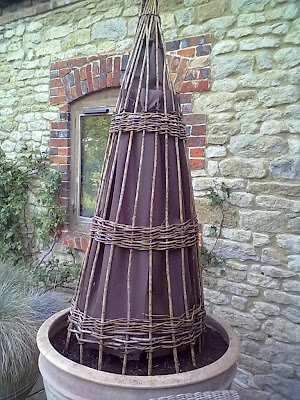 And here is that other one, snug and smart on the main patio area, where guests frequently sit out after breakfast.

Much better looking than a bundle of white-and-going-grey horticultural fleece, that's for sure.

But if anyone has any other bright ideas for protecting fairly tall plants, other than the "bundle up in fleece and use lots of string" then I would be interested to hear about it!

Posted by Rachel the Gardener at 09:00