How to remove Ivy from mature trees - and why!

I work as a volunteer on my local canal - the Wilts & Berks Canal, which now runs mostly through Oxfordshire, due to some changes with county boundaries, but let's not get started on that - and we are often faced with this issue.

Ivy grows up the trees.

Massive, massive amounts of it.

We have to cut it down.

And inevitably, one lone passer-by gets all upset, and starts berating us for removing the wildlife habitat/disturbing the nesting birds/bats/whatever.

Tact and diplomacy are the name of the game, when you work as a volunteer on an amenity with public access, so we never actually slap them around the head with a frond of ivy, tempting though it is.

Instead, we explain carefully and politely that there are several very good reasons for removing ivy from deciduous trees: I've written several articles on the subject of ivy removal and why it is often necessary, just type the word "ivy" into the Search box, top left of the page, and see for yourself.

For the canal, though, the main reason is safety. Ivy hides a multitude of sins, and the trees which grow along the canal - and by this, I don't mean the proper mixed hedging that you get on the outside boundaries, I mean the ones growing between the towpath and the canal bed - are sinful indeed.

They are mostly Ash and Willow: they are ALL self-set, which a polite term for "weeds". And they are all going to have to be cut down once the canal is back in water, because the whole point of a canal is to have a towpath next to the water, so that horse-drawn boats can be pulled along it. Not possible with trees on the bank!

And don't shout "Horse drawn boats? Are you bonkers?!" like that, there is quite a revival of horse-drawn boats, actually. It's a lovely thing to see, and far more fun than a smelly, chugging diesel engine. And who knows, with rising fuel prices, fuel scarcity, a return to old technology etc, we may yet find that horse-drawn vehicles become de rigueur once more.

As a volunteer, we do try not to cut down any of these trees just yet, unless we really have to: all mature trees are things of beauty: 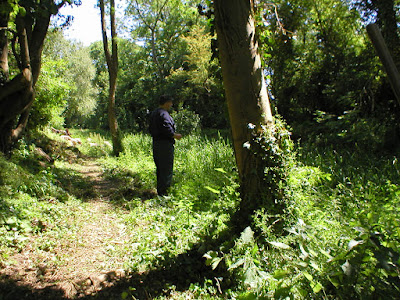 Here's part of our stretch of canal, between Stockham Park and East Challow - left - and it's pretty lush, isn't it?

However, even though the canal might appear to be an untended wild area, it actually takes a lot of unkeep, and constant monitoring and maintenance, otherwise it quickly degenerates. 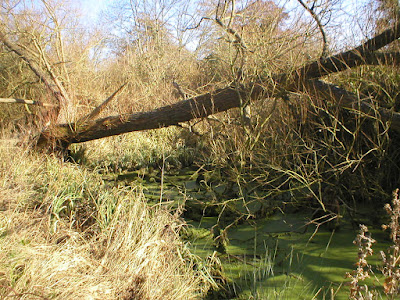 People often say "Ah, but it's a wildlife paradise!"

Well, not really: not even the wildlife likes a stagnant canal. And if the tree fell because of disease, it could well be infecting other trees.

In this photo, the dead tree fell over the canal, luckily: if it had fallen the other way, over the towpath, it could have been very serious.

So we need to spot these dead trees before they become unstable, and squash an innocent passer-by.

Part of being able to spot trees which are in trouble, is simply being able to see them, to assess their health, and this requires the removal of the ivy.

Our normal method is simply to cut through the ivy stems, at a convenient height. We pull out as much of the upper ivy as we can, and we keep an eye on re-growth. 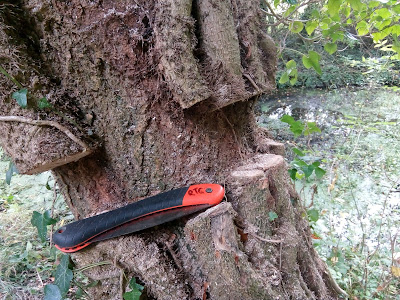 Take a sharp pruning saw (that orange thing), and carefully sever the stems, cutting out a section a couple of inches long.

Pull or push out the short cut section, which makes it easier to do all the other stems, because now you can see where you are, you can see the bark of the tree, and you don't get your knuckles bashed. 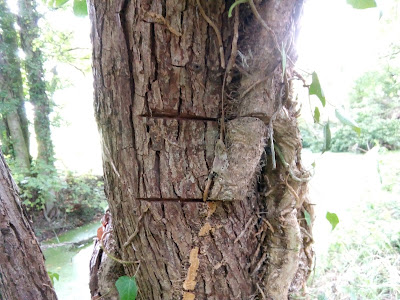 Whoever did this one, cut far too deeply, and has cut right into the bark of the tree.

You can see that they also failed to take out the cut sections, which is just laziness. 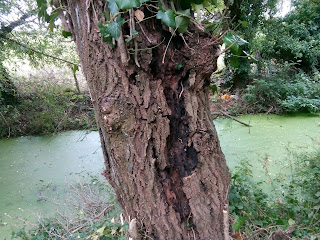 And this is why it is so important for us to carry out this ivy removal.

The tree on the left here: can you see that large vertical fissure?

The wood is completely rotted away, to a depth of several inches into the trunk - it's like sponge, you can poke it out with your fingers.

This tree is going to be felled with some urgency, along with a few others which we found to be also in a very poor state, with large areas of rot.

So next time you are walking along the canal, and you see trees which have had their enshrouding ivy stems cut through, don't wail about the loss of the ivy, be grateful that someone is striving to keep your towpath safe, for you to walk along it, and enjoy the trees!

Oh, and ps, if you want to know more about the Wilts & Berks Canal, here's their website.

Posted by Rachel the Gardener at 09:53