How to move a large standard Rose

I had a question last week:  "How do I move a large, established, standard Rose."  "With fear and trembling" is the answer!

As it happens, I have actually done this a couple of times now, and I'll happily tell you all about it.

Firstly, what do we mean by a "standard" rose?

It means a rose which has been carefully trained since infancy, to have one long central upright stem, with a lollipop of flowers at the top. 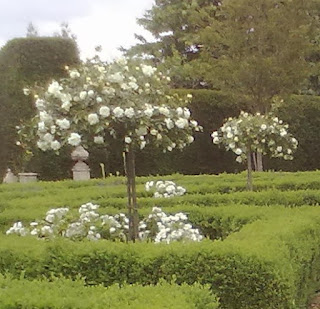 Here's a couple, in one of "my" gardens - left. (Yes, I know the Box hedges needed clipping! This was actually the "before" picture for the hedging..)

They can be knee height, waist height, shoulder height, head height: the taller they are, the more they cost, because the formative training takes longer - years, in some cases.

Most standard roses are grafted: that means, the roots and upright part are from one type of rose, usually Rosa rugosa, which is fast-growing and sturdy.

Then, the more decorative rose is grafted on at the top.

This means that the rose never grows any taller: the main stem gets thicker, and the top part gets denser, but the whole thing does not grow any taller.

Now the question is, can such a plant be moved?

I've successfully moved roses in the past: (*checks back through blog articles - oh! I never did get around to writing that article about moving a mature rose. Maybe later...) and they are not the easiest things to move, as they don't have a nice dense rootball.

But it is possible.

Standard roses, however, have another whole layer of complexity -  to move something fragile and top-heavy like this, will definitely take two people, and some extra care. Obviously, this is not something to be undertaken lightly, but sometimes it is necessary, and if you have to do it - well, needs must, when the devil drives, and if the alternative is having the roses dug up and thrown away, then it is clearly worth at least trying to save them!

In my case, part of the garden was scheduled for demolition, and four large, top-heavy standard roses had to be moved.

First job: first and always - prepare the place where they are going to. We dug (that's me and my current Trainee - I told you this was a two-person job!) a nice big hole, enriched the soil, removed all weeds, and left the hole ready for planting, ie with the soil lifted out and placed to one side, and with a couple of trowels and a sledgehammer to one side, along with a selection of tree ties.

Next job: reduce the top part, so that we can get close to it without being stabbed in the eye, or scratched to death. This is no more than "hard" dead-heading, really: just cut back enough of the flowering top, such that you can work around the bush with relative ease.

Start the digging: we dug a channel all the way round the  base of the rose, about a yard/metre out from the main stem, cutting through any roots we found, and excavating out the soil.

This allowed us to attempt to cut "under" the rose, aiming to lift out a solid ball of soil and - hopefully - roots, of about a foot and a half (45cm or so) across, and about the same size in depth.

Once we were starting to make progress underneath it, one of us was detailed to hold the stem, while the other one undid all the tree ties, and wiggled loose the supporting stake. Once that was done, one person had to be holding the stem at all times, for the obvious reason.

("Because otherwise it would flop over and break," of course)

The other one then finished off the under-cutting, and together we lifted the whole thing out and into the wheelbarrow, with one of us carefully supporting the head.

Having said that, one of them came out with the stake still firmly embedded in the rootball: 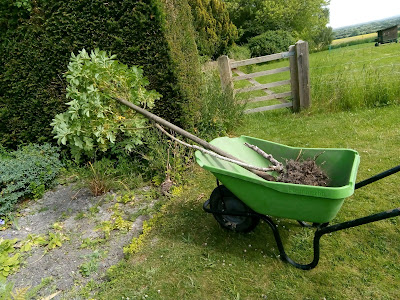 ..which made it very easy to get it in the wheelbarrow, although it was pretty heavy to lift.

This particular one is a standardised Rosa rugosa, so we didn't reduce the head by much.

Having trundled it across the garden to the hole we had prepared, all we had to do was lift it out of the barrow, and place it carefully in the hole, with one of us holding it upright, while the other one sorted out the roots.

Leaving one person holding it upright, the other one stood back, and assessed whether the rose was "facing" the right way, or should it be revolved.

Frankly, it was that heavy, we agreed that it would be fine as it was...

... so one of us continued to hold it up, while the other one started backfilling the soil around the roots.

Once a few handfuls of soil have been firmed down, but before the whole thing is settled, the stake needs to be re-positioned: for the one in the picture, the stake was already there, but for the others, the stake needed to be inserted, carefully using the original "hole" through the root ball. If the old stakes are badly rotted, now is a good time to replace them.

Now for the tricky bit: one person has to hold the top of the rose, while the other one hammers the stake in place. This means positioning the stake very, very close to the stem, then gently leaning the top part away, to prevent it being hammered. It also means that you have to trust your partner, who is using a sledgehammer, worrying close to your face!

Once the stake is firmly hammered in, one person continues to hold the top, while the other one completes the backfilling. In case you are wondering why I specify staking before doing all the backfilling, there is a reason: sometimes, stakes will only "go in" in certain places, ie if there are stones or roots underground. Sometimes, you need a bit of wiggle room with the plant, in order to get it close to the stake, and if you firm in the plant first, then you have to lean it awkwardly, which can look quite ugly. By getting the stake in place first, you can sometimes shuffle the rootball over a few inches.

Now we're nearly done: one person continues to support the head, while the other fits the tree tie or ties in place, good and firm, but taking care that the stem is not rubbing against the stake. As we have moved both the plant and the stake, the position of one relative to the other might be quite different now, so it's not just a case of replacing the old ties where they were before: you might need to fit them in different positions.

At last! We can both stand back and look at it. 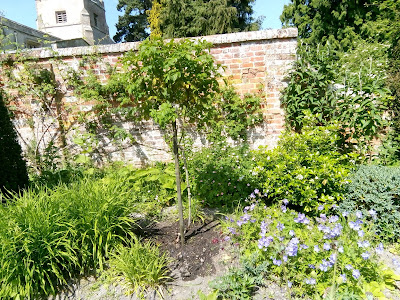 And hopefully, not look at each other and say, glumly, "it's not straight..."  (which would mean digging it out and doing it all over again, which would be annoying as well as being possibly injurious to the plant.)

Here it is, left,  in the new position: plenty of company, but no immediate competition, so it should do well.

Final job - water it well - slowly and thoroughly. Mulch around it if possible, to help retain water and suppress weeds, then water it every day for a week, every week for a month, and keep an eye on it over the following months, as it might need extra watering for the first year or so.

The nerve-wracking part is the next day... and the next few days. Will it droop and die? Will it recover? 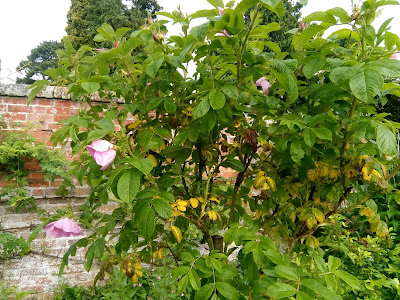 This one did splendidly (all four of them did, thank heavens): here is it a fortnight later, a few lower leaves have gone yellow, but the rest of it is lush, and it is making new growth - and flowering as well, which is an added bonus.

Normally, I would not allow a recently-moved rose to flower, because they put a lot of energy into flowering, and we want them to use all that energy to make new roots.

But this is the one with the large solid rootball, so I left some of the flower buds on it.

Well, there you go, how to move a very large, top-heavy standard rose, one step at a time. It's not something I enjoy doing, it's nerve-wracking every time, but it can be done!