The other day, while sorting out some old papers, I found an article in a gardening magazine from ten years ago, listing the three major changes we should expect in our gardens for the following decade - that is, now.

They warned us to expect long, hot, dry summers, mild winters, and prolonged periods of flooding, which would mean three major changes to how we garden, here in the UK.

Like all predictions, it's interesting to see just how wrong it was!

The first suggested change, from ten years ago, would be that we would see more artificial lawns, as increasing heat would make it difficult to grow grass, and more time-consuming to have a lawn, as it would continue to grow all year round.

To be fair, I am seeing the occasional use of artificial grass now, but really, only in tiny areas where grass struggles to grow, and where there are other needs such as small children needing to play outdoors without getting muddy - which, frankly, I see as an essential part of childhood and natural development, but that's just my opinion. 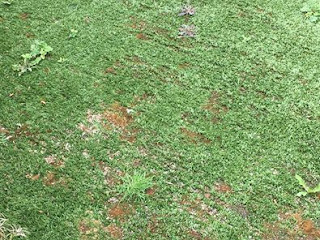 And there is another facet of artificial grass which no-one every mentions, when you go to buy it - it wears out!

Here - left - is a hilarious picture (well, it makes me hoot, every time!) of some artificial lawn, complete with bare brown patches, and WEEDS growing through it!

And no-one ever tells you that you also have to sweep it every so often,  to remove debris, weed seeds etc. Otherwise it starts looking very shabby. I suppose you could use one of those garden vacuum/leaf blower things, but frankly that's a bit too close to housework for my liking. "Darling, it's your turn to hoover the grass this week."

So even artificial grass is not a complete answer.

It is certainly true to say that lawns now often continue to grow right through the winter: a couple of years back I was still mowing in December! But there is no sign of them losing popularity, or becoming over-difficult to manage.

Point Two was that increasing droughts would necessitate plants originally from arid countries being grown here more, and I would certainly agree that we do get a wider selection of plants to choose from than ever before, but not necessarily from arid countries. How many people have actually bought a cactus lately?

In theory, we should be looking at more silver-foliaged plants, and plants with hairy leaves which can better withstand the drought, but in reality we are seeing more exotic items such as those enormous tree ferns, indoor orchids (which are now as cheap as geraniums, and available in our supermarkets) and highly-bred relatives of old favourites, such as all the new Salvias, and Penstemons, that are available.

The third prediction was that flower beds would have to be designed to cope with frequent floods.

The article suggested a two-pronged approach, a combination of building raised beds incorporating a thick layer of gravel or hardcore for drainage, and a move towards replacing our familiar herbaceous perennials with, basically, bog plants such as Gunnera manicata, Iris pseudacorus (that tall yellow Flag Iris that you often see on the margins of rivers), Zantedeschia (big white trumpets, lovely thing), Rodgersia and so on.

This one proved to be impossible to implement in real life: it may well be boggy in winter but if it's then bone dry through the summer.... well, that is just two sets of conditions that can't easily be combined.

So where are we, ten years on?

The predicted hot, dry summers totally failed to materialise. We have had odd fortnights of unbearable heat, enough to wilt the average gardener: then we get late frosts (we had four, this year, do you remember? Ruined all the apple blossom.) and then we get two months with no rainfall to speak of, then, just as we all put away the paddling pools and fished out our winter woollies, there was another sweaty hot spell.

And don't forget last year - the summer that never was, remember that? I didn't even get a tan last year....

Drought has not really been an issue - most of the UK didn't even get a hosepipe ban this year, despite nearly two months of no rain at all: sales of water butts continue to rise, though, which is good, as more people realise that rainwater is not only free, but is actually better for the plants.

As for floods, well, it's true to say that we've had some whopping flash flooding over the past couple of years: my garage still had a tide-mark a foot up the wall from the last one, earlier this year. But it seems to be every third year or so - not enough to need to rebuild the beds. And it could be said that a lot of the flooding problems are due to poor infrastructure - building houses on flood plains, too many paved-over gardens, lack of maintenance for road drains, that sort of thing.

And what will it be like next year? Will we get a hot early summer? Or will it be yet another dismal one? The truth is that no-body knows for sure, so there's little point in making large changes to our gardens, based on something that might not happen.

All we can do is keep improving our soil: adding organic matter helps it hold water in dry spells, opens up the structure to allow excess water to drain, and builds up a good ecosystem of worms, bugs, and nutrients to give our plants - whatever we choose to plant - the best possible conditions for growth.