Silver Birch suffering from death at the top

Here's an interesting question which arrived in my inbox the other day: David sent me a picture of a recently planted Silver Birch sapling in his garden, which appears to be dying at the top, but is ok at the bottom. 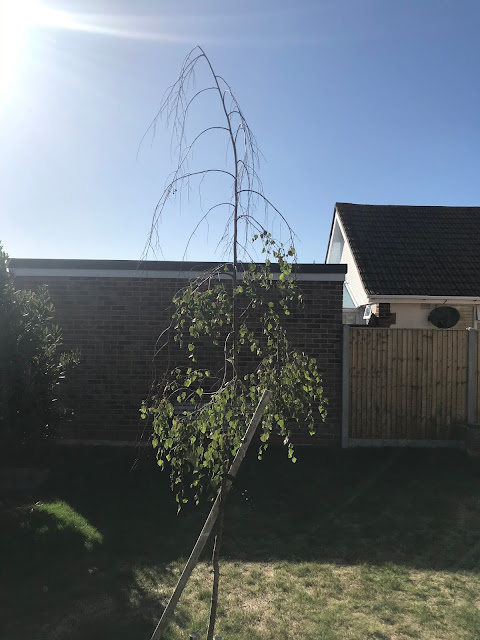 David told me that the garden is near to the beach, so the soil is very sandy: and he commented that he has been watering the tree regularly, as instructed by the supplier.

So that would normally be the first thing I would say - was it watered properly. In this case, yes.

So, watering is not the problem, then!

Mind you, if the soil is very sandy, then any water which falls, be it rain or the owner watering it, will run straight though the soil and will drain away: and Birch trees don't have enormous tap-roots, they have a wide spread of very shallow-growing roots.

So if I were planting a tree in sandy soil, I'd do my best to incorporate a lot of what is called "organic matter" in the ground, before I planted it. Organic matter can be home-made compost, or bought-in well rotted farmyard manure - anything other than "multi-purpose compost" because the sort of compost you buy in bags from the garden centre is feather-light and fluffy, and does not hold moisture the way that proper "organic matter" does.

In fact, tell you a story (if you don't know by now how easily I digress from the official subject, then you haven't read much of this blog, have you!) I once worked in a garden where the lady owner had been very ill in hospital, and well-meaning friends decided to give her garden a makeover to welcome her back. Her soil was horrible rock-hard clay, so they bought in a lorry-load of multi-purpose compost, spread it all over the borders, about a foot deep (yes, on top of the solid clay), and popped in a load of new plants.

Every single one of them fell over! The compost had no "heart" or "body" to it: walking on the beds was like walking on a mattress, all springy and fluffy, and  anything growing more than about two foot high would flop over at the least bit of wind. I had to start at one end and go all the way round, lifting out all the plants, digging in the compost, then replanting.

And the moral of this tale, is to avoid spreading bought-in compost on the beds as a mulch: use it for pots and for seedlings.

Getting back to the subject of enriching sandy soil: I should point out that when doing this, it is important to dig a planting hole that is much bigger than the root-ball of the new sapling.

Because if you only chip out a pot-sized hole in your own, less-than-perfect soil, and fill it with lovely organic matter, then the roots won't have any incentive to get out there and grow, they'll hang around in the nice rich soil. This is bad.

Plus, you are creating a "sump", an area of soft rich soil, which will then fill up with water and might make the roots of the sapling rot.

So it's best to dig a good big, wide hole, bung in the organic matter, mix it up well with the original soil, firm it down well, then dig a smaller hole in which to plant the sapling. This gives it a good start: nice soil around the roots, and more of it to either side, to encourage it to spread out.

It's also always a good idea to have a big clear area around each tree that you plant: grass is greedy stuff, and if you don't keep the area around the trunk clear, then the roots of the tree are competing with the grass, plus there is always the risk of damaging the trunk when mowing.

So, if we assume that David's tree had an enriched planting hole, what's gone wrong?

The wind comes whistling in across the sea, and then hits all the coastal houses: and you can see that the lower part, shielded by the fence, is looking quite healthy.

Normally, I would say that wind damage alone would be a likely candidate, but in this case, the wind might indeed be salty, which would coat and scorch the upper, new, leaves, causing them to die.

Is there an answer?

Well, firstly I would suggest to David that he doesn't immediately chop off the top, the apparently dead bit: excessive wind can cause a tree to drop nearly all of its leaves: but they usually grow back again. This has been an exceedingly hot, windy, summer.  In my own garden, one of my decorative Japanese Acers did this, last month: every single leaf on it shrivelled up and died. I was quite upset - I've had it for 15 years or so, and it's Osakazuki, one of my favourite cultivars. But cheers and hoorays, it has now sprouted a whole new batch of leaves! Yay!

So I would say to David, give it a few weeks and see if it sprouts any new leaves.

But if it doesn't, then is all lost? David is understandably not keen to chop off all the apparently dead bits, as that would basically mean losing the whole top part of the tree. However, if it's dead, it's dead, and there's no point leaving it hanging around, as dead wood looks ugly, attracts the sort of insects which like dead wood (and which often then travel into the live wood and scoff that as well), and is prone to breaking off, which can then damage the lower portions of the tree.

My advice would be to firstly give it a bit more time, and a bit more water: but if there are no buds to be seen on the upper limbs - you might need to go up a stepladder to look closely - then he might have to admit defeat, and prune off the dead material.

Personally, before doing that, I would contact the supplier: if you kept the receipt, they should replace it, if you take it back, complete with roots. I'd phone or email them first and check, before  you dig it up, but most tree suppliers/garden centres want their customers to be happy, and are usually pleased to replace something which has died. You may think it's embarrassing, to stand in the shop admitting that you've killed a plant, but that's not the case - the shop is delighted to prove to all the other customers in the store, that they do offer a guarantee, and that they honour it. On the few occasions I've done this, I've received excellent service, no questions asked at all. Once it was an 8' tall Redwood which cost £45, I was very apprehensive about taking it back, but they not only replaced it, but did so with an even bigger one, with a much higher price tag on it, as they didn't have any small ones in stock.

If David doesn't want to, or can't, return it, then all is still not lost: even if he has to cut off the top part of the tree, it will - with luck - grow back. I have a small Silver Birch in own garden, whose top half was snapped off by excessive winds one winter. It was ruined! Ruined! I sawed off the broken top bit, as high as I could reach (it was quite a bit bigger than David's one) and for a year, it looked ridiculous: but then the next branch down took over as the "leader", and now you honestly would not know that it had been damaged.

As this tree is such a young one, there is every chance that it will do this: a new leader will appear, and it will continue to grow.

Finally, the usual word of caution: if a tree or other plant has died, there might be a good reason for it, and if you don't fix that reason, then any other tree or plant in the same place, is likely to suffer the same fate.

So if the tree was damaged by the wind, then any new growth is likely to also be damaged by the wind, in which case you would need to change the plant - go for something which can tolerate high winds - or change the situation by, for example, attaching trellis to the top of the fence, to create a baffle for the wind: or planting a wind-break of tougher trees.

Did you enjoy this article? Did you find it useful? Would you like me to answer your own, personal, gardening question? Become a Patron - just click here - and support me! If just 10% of my visitors gave me a pound a month, I'd be able to spend a lot more time answering all the questions!!
Posted by Rachel the Gardener at 10:14