It seemed like such a good idea...  some time back, I bought a pack of mixed plant ties in my local cheapy shop, and one of the items was a handful of what looked for all the world like pipecleaners.

Typically, when I went back to buy some more, the shop no longer had any, which is the greatest drawback of these cheapy shops: when you see something you like, you have to grab them quick before they are gone... 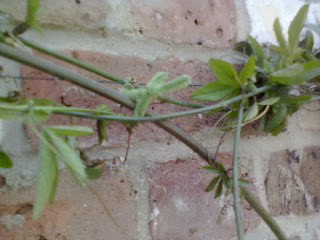 Here's one I used earlier - can you see it?

Taking a logical step, I wondered if it would be cheaper to buy pipecleaners in long  lengths, and cut them to size, so I searched online for pipecleaners, and found that they are really expensive to buy, surprisingly - you don't seem to be able to buy them in bulk, just in short lengths, and then only from craft-type shops.

However, a few months later, Wilkinsons (a slightly better class of cheapy shop) were selling packs of just the pipecleaner type. 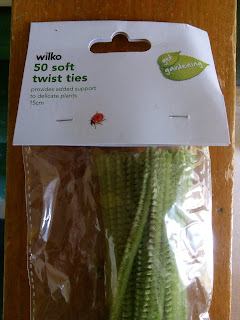 Aha! I thought. Just the thing!

They were about a quid for a pack, so I bought a couple of packs, and started using them.

Oh, there was one incident where a Client screamed "Look at that! What an enormous caterpillar!" and pointed to the roses, where one of these twist ties was clearly visible against the trellis......

I continued to use the pipecleaner ties, or "caterpillars" as they are now known, in various  of "my" gardens.

However, after a few months, they look like this: 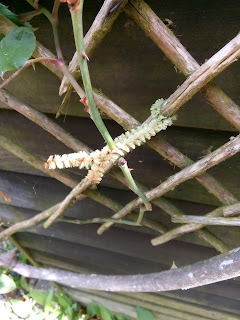 Not so much in looks - frankly, I think they are virtually invisible now - but the thought of how easy it is to scrape yourself in a garden, and how rust can be one of the routes towards contracting tetanus, which is something I really don't want.

Plus, they get brittle and snap.

So, after a year or more of trialling them, sadly, they get a "FAIL!"

Now what shall I do with the left-over pack of furry green caterpillars?  Suggestions on a postcard....